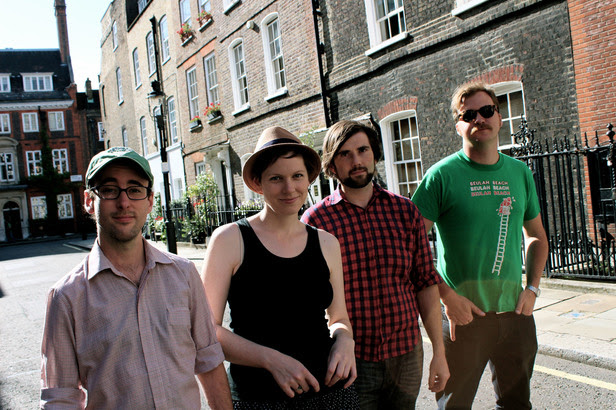 Indie-pop group Allo Darlin’ decided to call it a day recently, saying that: “It is hard to find the words to describe exactly how much fun it has been to be in Allo Darlin’, and what a privilege it has been to make records and play shows from Brisbane to Bern, Boston to Bristol.”

After announcing a short string of farewell shows, they also revealed their final single, ‘Hymn on the 45,’ and its B-side, ‘Wanderlust,’ which will be released tomorrow via Fortuna POP!  The melancholic tracks ruminated on moving to a new city, and what it’s like to miss people when embarking on your own adventures.  In light of their decision to split, both tracks feel particularly bittersweet.

‘Hymn on the 45’ now has a new video, which is just as emotive as the track.  Capturing the band as they perform the single itself, the video is interspersed with footage of Allo Darlin’ doing what they do best, at shows, in stores and even in private.  It’s a joyous ode to the band’s career, with each member constantly smiling, as if to celebrate their career rather than mourn the group’s passing.  Watch the video as a UK exclusive below.