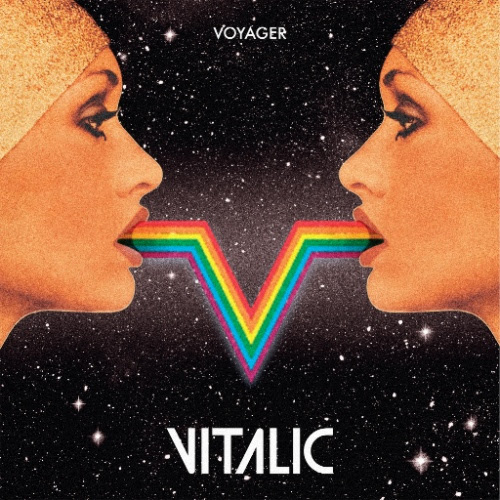 Odes to fags are surprisingly uncommon in pop music. Not fags, booze, rock and roll and sex, just the joys of flipping open your pack of Marlboro. If that’s what you’re after, Voyager by all round Frenchman, Vitalic, serves one up on a platter. Helpfully it’s called ‘Sweet Cigarette‘ so signposts its (slightly camp and curiously mundane) intent. In a way, that tribute to joys of lung cancer fits in with an album that, across the board, feels like a tribute to all the styles that tickle Pascal Arbez‘s (for it is he) musical fancy.

Voyager quacks along with nods to Kraftwerk, electroclash, early warehouse-type rave and even a bit of countryman, Jean-Michel Jarre. Throw in a blatant tip of the hat to Richie Hawtin‘s percussive ‘Spastik‘ on ‘Levitation‘ and you have a collection that seems intent on showcasing a record library. Not necessarily a bad thing, and there’s a pumping efficiency about it all, but the aftertaste is perhaps a touch hollow.

That said, a track like ‘Lightspeed‘ is a pure club banger. That’s sometimes used as a criticism – me, included – however, why not? Hefty bassline, raucous percussion, and an array of squelches and brain-melting synths make for a pretty intoxicating and hedonistic vibe. Just a shame it’s too short at a shade under four minutes. Begging for two copies in the right, late-night environment.

As seems obligatory on club records attempting to show the breadth of skills of their creator, a couple of sonorous and portentously atmospheric tracks crop up. ‘Eternity‘, in particular, seems intent on demonstrating some kind of serious, anti-frivolous aesthetic. Vitalic isn’t the first and certainly won’t be the last to feel the need to chuck suchlike in. Quite the point escapes me as it simply interrupts the flow without really adding anything of note to the party. It’s fine, but, why bother? For all its shortcomings, Voyager rollicks along when it’s in its stride. It may not be the most original electronic record you’ll hear all year, it may flirt a little too enthusiastically with accessibility whilst neglecting complexity, but, there are worse things to be. Big riffs, hefty beats, plenty to move folk off their arses and onto the dancefloor.

And that’s it really. Voyager is an electro-pop record that borrows from the underground whilst still essentially being part of the pop pantheon. Worked in the ’80s, will work now. And the aforementioned ‘Sweet Cigarette‘ is probably worth the price of admission on its own.

“Light you up, you start to glow
Smoking hot, I can’t say no
Sweet cigarette, sweet cigarette
I suck you in, I blow you out
To my burning love, I am devout“.

And you thought they didn’t write ’em like that anymore.