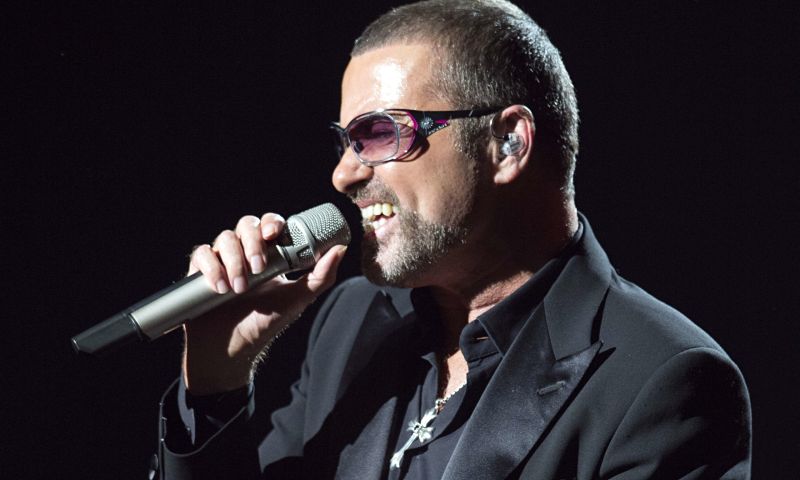 …I walk over to the vinyl in my flat. It’s arranged alphabetically by artist, in true High Fidelity-style. This means that the desired record in question is filed between Scottish noiseniks We Were Promised Jetpacks and Jack White. It’s an almost entirely white sleeve that on the right next to a rainbow effect bears the legend WHAM!

That exclamation mark is intentional. The impact of the band formed by two soul boys, Andrew Ridgeley and the talented son of a Greek Cypriot, Georgios Kyriacos Panayiotou (George Michael’s birth name) between 1982 and their split in 1986 was considerable. Looking at the pictures on the inside of that aforementioned album – The Final – it’s amazing how they changed over the course of four years. Then again, so did the music.

Though often tied in with pop contemporaries of the time like Duran Duran, Spandau Ballet and Frankie Goes To Hollywood, Wham! were actually much more politically aware than they ever received credit for. Not only did they play a benefit for Miners in 1984, but their songs dealt with issues like young marriage on ‘Young Guns (Go For It)’ where George and Andrew discussed getting married young and leaving your friends behind – a theme that Michael would revisit in 1996 on the single ‘Fast Love’. ‘Wham! Rap (Enjoy What You Do)’ looked at unemployment. The songs – taken from their 1983 debut album Fantastic showed the soul influence that they’d both taken on board from before Wham! as well as mixing in Hip-Hop, then very much an American music form and, by and large, still mostly an underground form in Britain – Adam Ant’s attempts notwithstanding. Musically these songs have dated very well. And supposedly hipper acts like the Specials and the Ruts were covering similar themes, while the music held its own with much of the ‘New Pop’ of the time. Sure, you could just hum along with ‘Club Tropicana’ and just see them as part of a Thatcherite age obsessed with simple partying. To do so would be to as much folly as to judge Bowie on ‘The Laughing Gnome’ or McCartney on ‘Mull of Kintyre’.

In 1984, it saw the band up their game. The title of their second album, Make It Big, could be taken as Thatcherite ambition writ large or Carry On-style sauciness, or simply becoming getting more successful. It contained their jaunty first British no.1 ‘Wake Me Up Before You Go-Go’ but it also featured more stylish accomplishments. ‘Freedom’ – yet another no.1 for the band – must be a serious contender for the best song that Michael ever wrote or sung. In the context of the time it may have seemed like another teenybop song, but to listen again now (or continuously, as I have done) this is a soul classic. As pained and yearning as anything the Motown songbook gave us. The album also produced what would be the first solo single ‘Careless Whisper’ (yes, the single was billed to George Michael solo and appeared on the Wham! album) and the utterly sublime ‘Everything She Wants’ which also was the AA-side of ‘Last Christmas’. As any pub quiz bore will tell you, the most successful song ever to not reach no.1. It was held off by Band Aid’s ‘Do They Know It’s Christmas?’ which Michael sang on anyway.

In 1985, the band became the first Western pop group to play China, a considerable achievement at the time. But George was looking to spread his wings and after two more singles under the Wham! banner the Motown-influenced ‘I’m Your Man’ and ‘Edge Of Heaven’ – both no.1s of course, the group bowed out with a sell-out concert at Wembley Stadium in June 1986, dubbed The Final (the album is not a recording of this event); twenty years later George would be the first artist to play the new stadium.

Whilst Ridgley’s solo career would consist of one much-savaged album called Son Of Albert in 1990, George Michael’s subsequent solo career got off to a flying start and set the template for many others that followed. Certainly, there had been other artists before, including Scott Walker and Michael Jackson, who had left behind the teen idol days to be taken more seriously. The phrase ‘doing a George Michael’ entered parlance to mean someone who was leaving a teen band to pursue a solo career. Amongst those who can have been considered to have been following his example are Justin Timberlake, formerly of N*SYNC and Robbie Williams, whose first solo single was a cover of ‘Freedom 90.’ Williams clearly felt the autobiographical lyrics applied to his own situation:
“Heaven knows I was just a young boy/Didn’t know what I wanted to be/I was every little hungry schoolgirl’s pride and joy/And I guess it was enough for me…

I was every little hungry schoolgirl’s pride and joy, And I guess it was enough for me…
But, today, the way I play the game is not the same;
No way.
Think I’m gonna get myself happy.
I think there’s something you should know.
I think it’s time I told you so.
There’s something deep inside of me.
There’s someone else I’ve got to be.
Take back your picture in a frame.
Take back your singing in the rain.
I just hope you understand.
Sometimes the clothes do not make the man.”

A few weeks before Wham!’s last hurrah, Michael scored a second solo single with the intensely personal ‘A Different Corner’; six months after that, he was at no.1 duetting with Aretha Franklin on ‘I Knew You Were Waiting’. It was one of the first singles I ever bought (aged 10). The first solo album Faith was a massive success, with the title track opening the album with ‘Freedom’ played on a church organ. ‘I Want Your Sex’ was controversial – coming as it did in the middle of a moral panic about AIDS fuelled by paranoia and bigotry and little to do with actual information. ‘A Different Corner’ had clearly not been a fluke – songs like ‘One More Try’ and ‘Father Figure’ showed he could scale the register, unlike many male singers,  embodying ballads with style and panache. The resulting tour showed he was right artistically and financially to have left Wham! behind but it seemed to make him unhappy at the pressure of fame.

The second solo album, Listen Without Prejudice vol.1 (a second volume never materialised), produced the aforementioned ‘Freedom ‘90’ (to distinguish it from the Wham!-era song) and outsold its predecessor in the UK. Yet he was unwilling to engage in promoting it as Faith had been. Though immensely soulful songs like ‘Praying For Time’ and ‘Heal The Pain’ showed how much he has matured as an artist, he felt disconnected. He didn’t want to appear in videos and increasingly became at loggerheads with his record company, Sony. This would result in a bitter court battle in 1993 – and it wasn’t the last time he would be in court, either.

A handful of singles over the course of the first half of the nineties eventually saw the release of his third solo album in 1996, Older. The album gave him two more UK no.1 singles – ‘Fast Love’ and ‘Jesus To A Child’. The latter was actually inspired by the death of his partner Anselmo Feleppa to AIDS. Speculation mounted about his sexuality, but it was in 1998 that he came out as gay, having been arrested in a sting operation in a public toilet in Los Angeles.

Though some saw this as his career entering the doldrums, most people actually saw this as George reinvented himself, finally becoming at ease with who he was. It produced a massive disco hit ‘Outside’ which saw him poke fun at his own arrest. The video saw snogging policemen and a toilet that turned into a nightclub. He became a spokesperson for LGBT issues, important at a time when there was still a great deal of prejudice against the community.

The 21st Century had been rather quieter for George. The fans were still with him, sending him to no.1 in the album charts three more times, with a studio album, Patience, a compilation Twenty-Five and a live album, Symphonica. The press seemed to pick up on his drug use and unfortunate brushes with the law, rather than examine what his longevity was down to. Michael hadn’t reformed Wham!, and he hadn’t needed to. Eighties nostalgia arrived but while George seemed to be becoming more and more reclusive, he didn’t need to step onto the hits of yesteryear trail.

One of his biggest hits was the aforementioned ‘Last Christmas’. The song recharted many times, even before the advent of streaming changed the charts. It seems bittersweet, then, that he should have been found dead by his partner, Fadi Fawaz, on Christmas Day. 2016 has been a year of celebrity deaths, and I cannot have been the only one who looked at social media as friends and contemporaries realised just how important George Michael had been.

So who knows what that rumoured comeback with Naughty Boy in the producer’s seat would have sounded like, whether it will see the light of day. But know this: George Michael’s music and altruism – his giving of money in secret to charities and individuals and expressly forbidding coverage; giving concert tickets to NHS staff, amongst other acts of generosity beyond measure, came from the heart and it’s clear that it made an impact on a great many. Remember him this way…