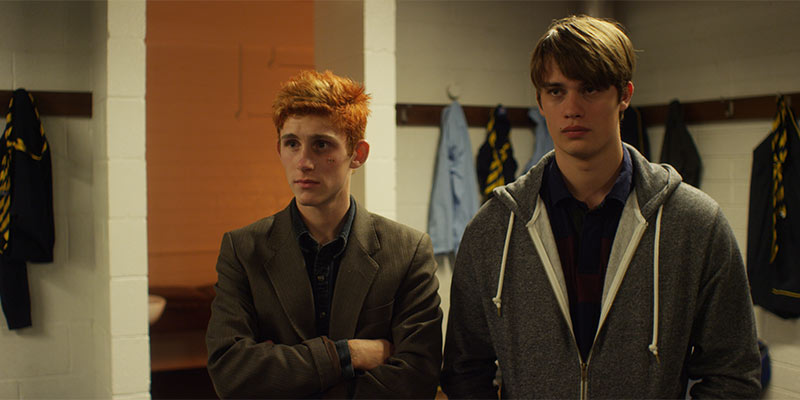 GFF 2017 opens with a glittering gala performance and UK premiere of Handsome Devil, the second film by Irish writer-director John Butler, following 2013’s The Stag. The opening shindig is always a good gauge of a festival’s prospects and the fact all three screens of the gloriously Art Deco, Glasgow Film Theatre are commandeered for tonight’s blow of the whistle is promising indeed. And the chosen film is perhaps the perfect beginning for twelve days that explore cinema from the most outre and underground to the (relatively) mainstream. Feel good, touching, occasionally raucous and straight forward enough to send the patrons off into the night with a spring in their collective step.

Handsome Devil wraps itself around the perennial struggle between the individual and the team. Between coming of age and creating a voice and character against the desire we all sometimes have to be swallowed up by the collective. Lest we expose our inner selves and the secrets we may carry, being mute in the crowd is sometimes the safest place to be. Most acute in teenage years, of course, and the film is set in a rugby-mad boarding school teeming with all the insecurities, bullying and frequent hilarity you’d expect. Solitudinous Ned, played by Fionn O’Shea, is labeled “gay” in the way that hormonal boys the world over are want to do – having this Suede poster on the wall of his bedroom probably doesn’t help, of course. Throw in a new boy, Conor, played by Nicholas Galitzine – mysteriously expelled from a previous school, and you have a sweaty, febrile and occasionally tense atmosphere within which discovery and, well, growing up is the name of the game.

There are familiar tropes – an inspiring new English teacher, for one – and you have the eternal setup. Push me, pull you, arts versus sport, gay versus straight, asserting one’s individuality versus fitting in and being normal. Slightly cliched it may be but it’s hard not to get caught up in. Straight forward enough but there are sharp one-liners and moments of genuine emotion to keep things breezing along. If ever one’s attention feels like drifting, a rollicking soundtrack jolts one back. Highly musical film all in, as it happens. Indeed our flame-haired protagonist is busted by the hip new teacher for using lyrics from The Undertones‘ ‘My Perfect Cousin‘ as an essay: “Never use a borrowed voice! You spend your whole life being someone else, who is going to be you?”

And therein lies the heart of this short but sweet film. Characters orbit with varying degrees of testosterone and thought – both ‘less‘ and ‘fulness‘ – and everyone learns lessons along the way. Secret and lies, discovery and pathos, characters reveal themselves in sometimes unexpected ways. Not massively original but some excellent performances. The two leads in particular as well as a standout presence from Michael McElhatton as the headmaster, Walter. A quietly wry piece of acting that somehow makes him the effortless fulcrum around which the whole film rotates – despite others having a deal more screentime.

A decent and charming start to the festival. A taster without being particularly challenging. Add in some hot red carpet action and star power in attendance and we’re good to go. Easy to see it being a big hit upon its nationwide release.