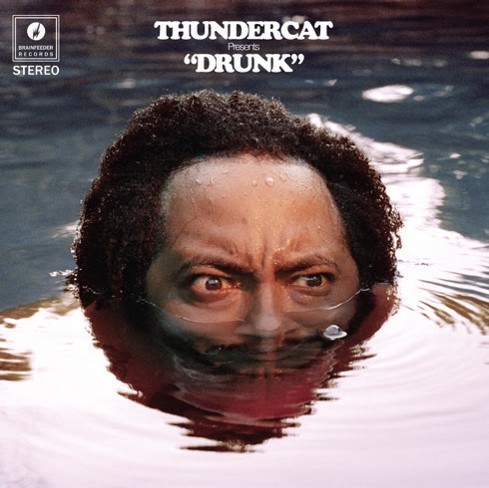 “I’ve always tried to hold true to what Erykah Badu and Flying Lotus told me: It has to come from an honest place,” says Thundercat.  “I feel like it’s a place that I’ve been in different ways, seen different angles of and it’s been a bit inspirational – the drinking.”  And so welcome to the not-so-sober world of the singer and bassist’s third full-length record Drunk.  From track one, he literally invites you to come tumbling down the ‘Rabbot Ho’ with him, encouraging you to become fully enveloped in his universe.

And if you want to delve into a realm that’s filled with a fusion of hip hop, jazz, R&B, pure pop, funk and even a touch of disco, you’ve come to the right place.  The heady genre fusions of collaborator Flying Lotus are all over Drunk, especially when it comes to ‘Uh Uh’, an astonishing instrumental thrill-ride that consolidates everything that’s good about Thundercat’s music.  ‘Bus In These Streets’ is a sparkling upbeat pop track, but there’s also some breathing room too, with both slow jams ‘Lava Lamp’ and ‘Drink Dat’ turning the lights down low.

The genre-bending would be mesmerising enough, but most of the tracks are also punctuated with added sound effects and layers upon layers of neon-coloured retro electronica that’s thoroughly charming.  The short skit ‘Jameel’s Space Ride’ is jam-packed with cheesy but utterly gleeful synth tones, while ‘Show You The Way’ riffs on vintage R&B alongside Kenny Loggins and The Doobie Brothers’ Michael McDonald.  But then it closes with sound effects ripped straight from Sega MegaDrive-era Sonic The Hedgehog.  And everyone knows that old Sonic music rocks.

Beyond the music though, there’s another reason that Drunk is so compelling: it’s very, very funny.  It’s not intended as a comedy album but most tracks are more than liberally laced with incredibly black and often highly surreal humour, which just adds to its pull.

‘A Fan’s Mail (Tron Song Suite II)’ has seemingly nothing to do with the movie Tron, but it does muse that “everybody wants to be a cat.” Living up to his name, Thundercat then says “I’m a cat” and then proceeds to meow repeatedly, both mocking our society’s obsession with felines and mimicking the silly conversations we sometimes have after having one too many.  On ‘Them Changes,’ his first exclamation is “nobody move, there’s blood on the floor/ And I can’t find my heart.”  It turns out that he literally cut out his heart to give to a woman, and he thinks “it must have fell when I lost my mind.”  It’s a tale that calls to mind Sufjan Stevens’ ‘I Walked,’ but instead of balancing its humour with remorse, Thundercat plays up the laughs.

A lot of the album’s funniest moments though are derived from pop culture references.  ‘Tokyo’ is, you guessed it, a song about doing some clichéd activities in the Japanese capital, but there’s also at least three references to cult anime Dragon Ball Z.  Hearing Thundercat say “I’m over 9000” probably won’t get old anytime soon.  On his duet with Pharrell, ‘The Turn Down,’ he laments over the mess that he’s made before asking “oh my god, where’s Captain Planet?”  Even the environmental crusader couldn’t help this situation though.

The pinnacle of Thundercat’s humour comes in the form of ‘Friend Zone.’  It’s a tale of a man who refuses to talk to a woman because she turned down his advances.  But this isn’t a bitter tirade against the woman.  Instead, he uses his character to satirise the stereotypical “nice guy” who feels he gets turned down without reason and now has nothing better to do than play video games (indeed he says, “I’d like to play Diablo” and “I’d rather play Mortal Kombat anyway”).  There’s even a bit of a meta moment when the narrator says “bitch don’t kill my vibe,” referencing the title of a 2012 track by Kendrick Lamar who also happens to have a guest verse on Drunk.

It’s sozzled, it’s high as a kite and sometimes it’s just downright psychotic.  But it’s because of the maniacal shifts in tone, its massive melting pot of sounds and Thundercat’s hysterical (sometimes in more ways than one) yet honest ramblings that Drunk will probably go down as his magnum opus.  It’s an intoxicating ‘Rabbot Ho’ you’ll want to keep diving down again and again.

Drunk is out on 24th February via Brainfeeder.