I’d not seen either of these bands since the late eighties. I went along in anticipation that they both could still cut it. Having been buoyed by recently seeing The Stranglers and The Damned , I should have had no doubts. Scanning, as I do from my lofty perch of er…being tall I noticed the audience again really covered all generations, which is great to see.

These days punks form an orderly queue outside the venue (the ever reliable Rock City) and chat peacefully about the many bands still doing the circuits. I only saw one late fiftyish old boy, slightly worse for wear being thrown out of the venue. His less than impressed Mrs following the entourage. The doghouse awaits… well he DID already have the collar.

These days the old punks are still pogoing, still fist-pumping and take up quite a bit more audience space than of old. There are band t-shirts with a couple more X’s in front of them now than you could find in the seventies. 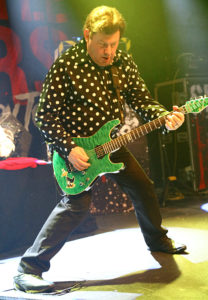 I’ve always been a Stiff Little Fingers fan, but I admit I had let it slip from my mind just how many anthems Jake Burns and the boys actually penned and what a top notch band they’ve always been live. Of course they can still cut it. They cut it, pasted it and sealed it in an envelope marked ‘As Good As Ever’.

From the initial strains of ‘Go For It’ which they enter stage to, they had the crowd, and I mean crowd, lapping at their feet like a faithful old bloodhound. Jake has many good stories to tell between songs. Funny ones at the expense of the other founder member, Ali McMordie’s vocal ability. About battling depression (‘My Dark Places’), about Ireland, and time for tributes to both Phil Lynott (before going into ‘When We Were Young’), and Joe Strummer before ‘Strummerville’.

There’s no point going through a list of songs, Setlist FM do a perfectly good job of that, but believe me, they were all present, balanced nicely with an array of newer tunes. ‘Johnny Was‘ is one of those on a shortlist where the cover version is better than the original and still sounds as poignant today as it did back in the punk days when the Anglo/Irish situation raged. A reminder of this also being in the night’s closer, the classic ‘Alternative Ulster’ thank you so much Mr J Peel. 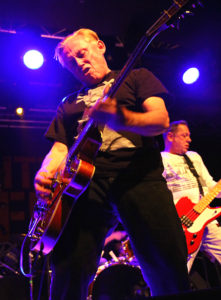 The night’s opening act Theatre of Hate were a real treat to have as a guest act, almost a double bill. They are no strangers to anthems themselves, one of those, ‘Do You Believe in the Westworld?’ was one of those hair on the back of the neck moments.

Kirk Brandon has lost NONE of the power in his voice and these really are a band still worth seeing. ‘Original Sin‘ and ‘Legion‘ have really stood the test of time and, with a smattering of new songs in the bargain, (The album Kinshi having been released last year) I would put them down as one of the best support acts I’ve ever seen.

I mentioned fist-pumping, it was a very fist-pumpy evening. Is it REALLY 40 years? Wow!