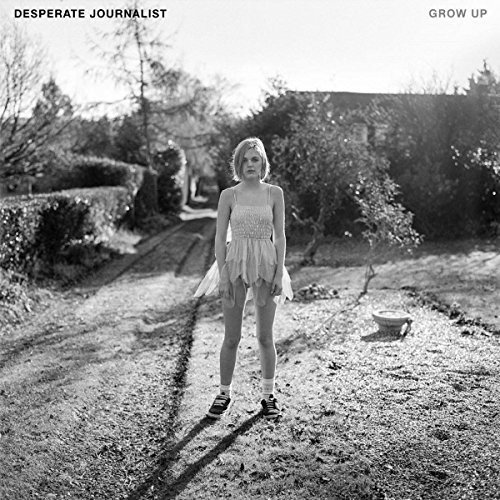 Maybe it’s just the rare sensation of having all my sad old 80s indie fan buttons pushed at the same time, but as the Gothtastic ‘Hollow’ storms out of the traps, sounding like no less a landmark than The Cure’s ‘A Hundred Years’, to be followed by ten more songs of equal brilliance, I feel like I did when I heard Doolittle, Bummed or Isn’t Anything for the first time – in the presence of genuine, tangible, indisputable greatness.

Anthony Wilson once said Joy Division were on stage because “they had no fucking choice”, and you know exactly what he meant, but in these days of “privately educated kids singing in falsetto about the over-privileged lives that they live” (as Fujiya & Miyagi beautifully put it), that’s an increasingly rare thing; but Desperate Journalist sound utterly driven, devoid of irony or concessions to what sells these days, like they’re doing this because they simply have to. Everything that was great on their 2014 debut – my album of that year – is more refined here, more focused, taken to new heights. Guitarist Rob Hardy jangles, chimes and soars in all the right places; the rhythm section, marshalled by  wonderfully-named drummer Caz Hellbent, lay down a meaty, often brutal low end; and in singer Jo Bevan, they have the first STAR British indie has produced in years. She’s a force of nature, switching easily from the sturm und drang of Siouxsie to the English ennui of Harriet Wheeler to the withering scorn of, yes, Morrissey.

It’s a lazy comparison given that everyone who writes about Desperate Journalist makes it, but fuck it, they do sound like The Smiths, because they’ve grasped exactly what The Smiths were about – not a jangly indie band fronted by an Oscar Wilde wannabe, but a loud, powerful rock beast who also had no fucking choice. “I am the chest pain that pins you to your bed”, sings Bevan on the blistering ‘All Over’; “They are so loud and I am so ineloquent” on ‘Be Kind’; and by the time she sings “The wine helped me kiss you, but I just couldn’t ask” on ‘Radiating’, the whole thing feels like a handing over, no, a grabbing, of the baton, and you can’t help thinking Moz would approve.

You can certainly imagine him smiling at ‘Why Are You So Boring?’ a high-octane indie-rock anthem stuffed to the gills with put-downs (“You touch me on the arm, lecture me on Animal Farm…Can one evening last so long?”), just as you can imagine halls, stadiums even, full of people yelling gleefully along to its chorus. Ditto the shimmering, self-aware ‘Resolution’ – “5-4-3-2-1 and it’s over – the band leader beaming/The fever, the screaming”. And the masterpiece of sarcasm that is ‘Your Genius’, the story of a teenage pop fan betrayed by a charlatan (Pete Doherty?) – “Nihilistic-tragic’s a good story, and it used to hold a fascination for me” – set to a gorgeous Marr-like melody.

And I haven’t even mentioned ‘Be Kind’ yet, the beautiful bouncing lovechild of New Order’s ‘Love Less’ and Nirvana’s ‘All Apologies’, the highlight of the band’s career thus far (and it already has considerable competition). Or ‘Oh Nina’ – apparently the theme of Grow Up is ‘working out what it means to be an adult’ (good luck with that – I’m in my late 40s and I still don’t have a fucking clue), and ‘Oh Nina’ is a wonderful evocation of that moment when all the people you got drunk with and did loads of crazy shit with when you were younger suddenly start getting married, buying houses and having babies, while you’re still drinking alone in your flat listening to Disintegration every night and wondering how the fuck they can just turn their old lives off like a switch – “I suppose it’s time that I admit that you grew up & got on with it/I’m so happy for everything you’ve started, but oh Nina, what a lot, what a lot of parties…” And of course the fantastic closer ‘Radiating’, a quite stunning and unexpected piano ballad about (I think) sticking to your guns in the face of romantic disinterest – “I’m chainmailed as Seberg in The Death of St Joan/One of these days I’ll turn into light/I know it sounds stupid, but really I might”.

Holy shit. What a band.

Grow Up is out now on Fierce Panda.