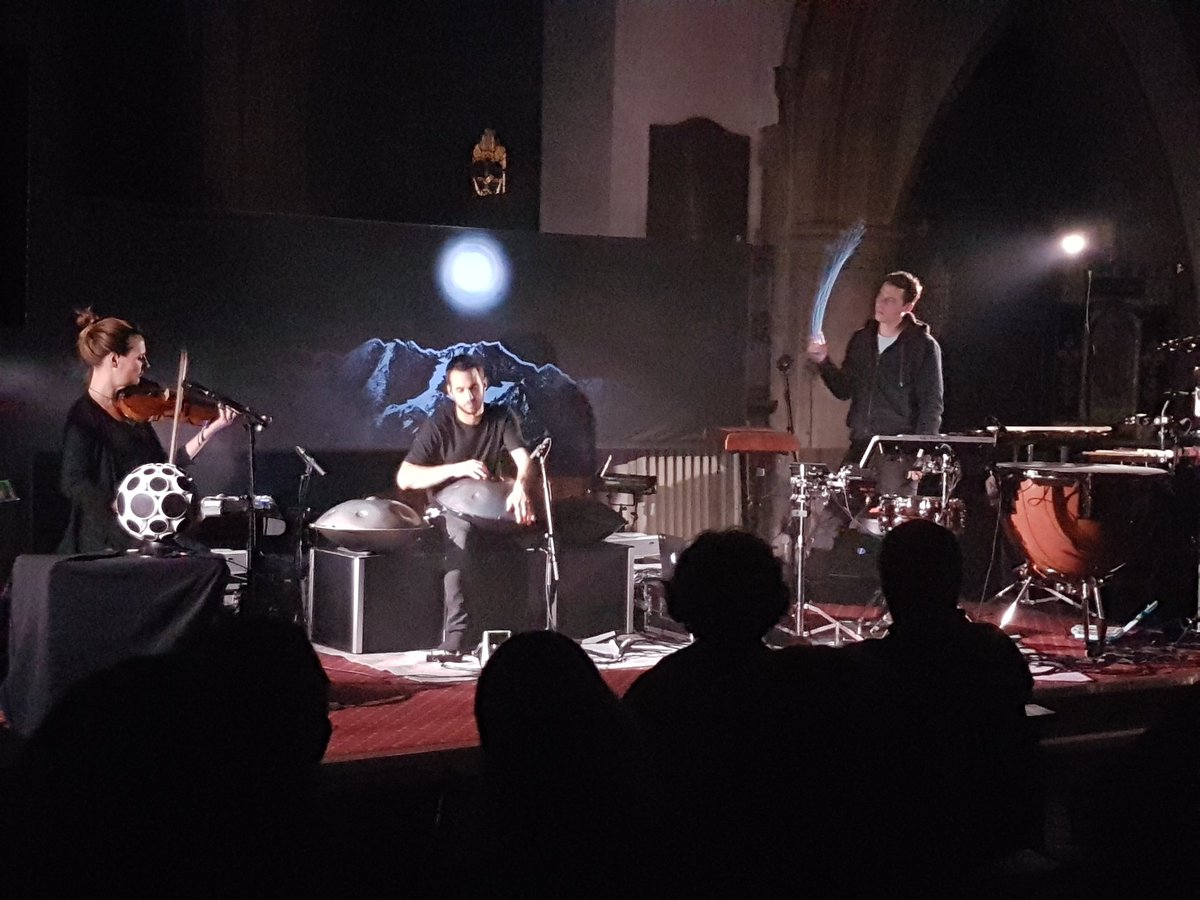 Rhythms. Our lives move to them. Heartbeats, the tick of a clock, the beeping of horns, the clapping sound of tracks under a train at high speed. Austrian hang player Manu Delago knows all about rhythms – manipulating their cadences, orchestrating their rise and fall, their ability to grow and expand upon layer upon complex layer of sound, traditional or modern, harnessing their percussive power, and the base that they form for jazz, electronic and classical music. This is a man who has worked with Bjork, played a part in the cinematic orchestra, worked with the London Symphony Orchestra and is now crafting his own niche as the humble yet virtuoso leader of this most inventive of trios, Manu Delago’s Handmade.

Beginning the night, stripped back, alone and dressed in black, his hands palming and pushing, clips and drum trigger pads with his innovative instrument, the hang – a kind of hand drum inbuilt with multiple synth trigger pads. He crafts delicate patterns that build and build before returning to a motif. ‘Frozen’ is a case in point, like the pattering of rain on a window as you follow its traces: simultaneously entrancing and awe-inspiring, his use of rhythmic timing and an instrumental beat has something of the East and African musical quality to it.

Mostly performing songs from his most recent album Metromonk – out at the start of the year on Tru Thoughts and produced by Matt Robertson (Björk, The Prodigy) – it’s a fusion of traditional instrumentation with sparing use of vocals and experimentalism which roams over new terrains for the musician. Tonight, Manu Delagu is front and centre, anchoring the sound framed by a backdrop of the stained glass windows of St. John’s Church and its cavernous ceilings that reverberate to the rhythms of the multi-instrumentals and the beats. There is a kind of trip-hop dappled effect to ‘Spaceful’ that opens up a vastness with its twinkling sound created by the hang and the accompanying instrumental sweeps and twinkles that are somewhere out there in the stratosphere with the experimentalism of Burial.

Later Manu Delagu is joined by Isa Kurz on piano, violin, vocals and Chris Norz on a range of percussion, timpani and xylophone. They add a further expansiveness to an already cinematic sound. There are sparing, but well-chosen vocal accompaniments with first Isa on the gorgeous sound of ‘Mesmerising’ which is dedicated to a German scientist who came up with the name. Delagu tells a story about his first appearance at Green Man Festival “when I spoke in German nobody understood me, so I hope you can understand me in English tonight”, before ‘local’ Pete Josef lends his angelic falsetto to the dreamy ‘A Step‘.

With an impressively shifting set of visuals, the backdrop grows with each strike as if it is sprouting and blooming like the bulbs of flowers, blue, red and purple, the kind that bloom throughout spring, Manu Delagu holds us in his palms. It is sensitive, heavy and poignant. At one point during the opus-like ‘Sun in the North’ from the 2015 album Silver Kobalt, we are offered a view of the night sky and its stars as it transports us to the River Danube, the Bohemian Forest, and the granite mountainous region of Austria.

The evening ends with the exultant ‘Chimp Rave’, ushered in by a Timpani bash like an as yet unwritten movie soundtrack, its layered jazzy, instrumental loops and stomping piano notes are playful, thudding and exciting, leading up to a crescendo of bass lines. The piece is backed by the visual of a drawing of a monkey cheekily dancing and poking its tongue out behind the musicians. Together they craft a sound that is built upon rhythms and experimental multi- instrumentation which possesses a scope similar in ambition to an entire futuristic orchestra yet is one that is actually made up of only a few players.

Manu Delago and his fellow sonic travellers expertly remould soundscapes. This allows the rhythms to control the pace with an extensive range of percussive elements which, in turn, guide the moment and allows each individual to go exactly where they feel. It is this element of spontaneity that makes no one evening or set the same as any other. On this evidence, Manu Delagu’s Handmade are one of the most mind-expanding, incredible live experiences that I have ever witnessed. My heart swells and my mind is stretched by such a unique performance, something that I have never ever seen before. It is little wonder that the evening ends with the entire crowd on its feet thunderously clapping its appreciation to tonight’s three performers. It is the kind of rhythm they would appreciate; the rhythms of our lives.