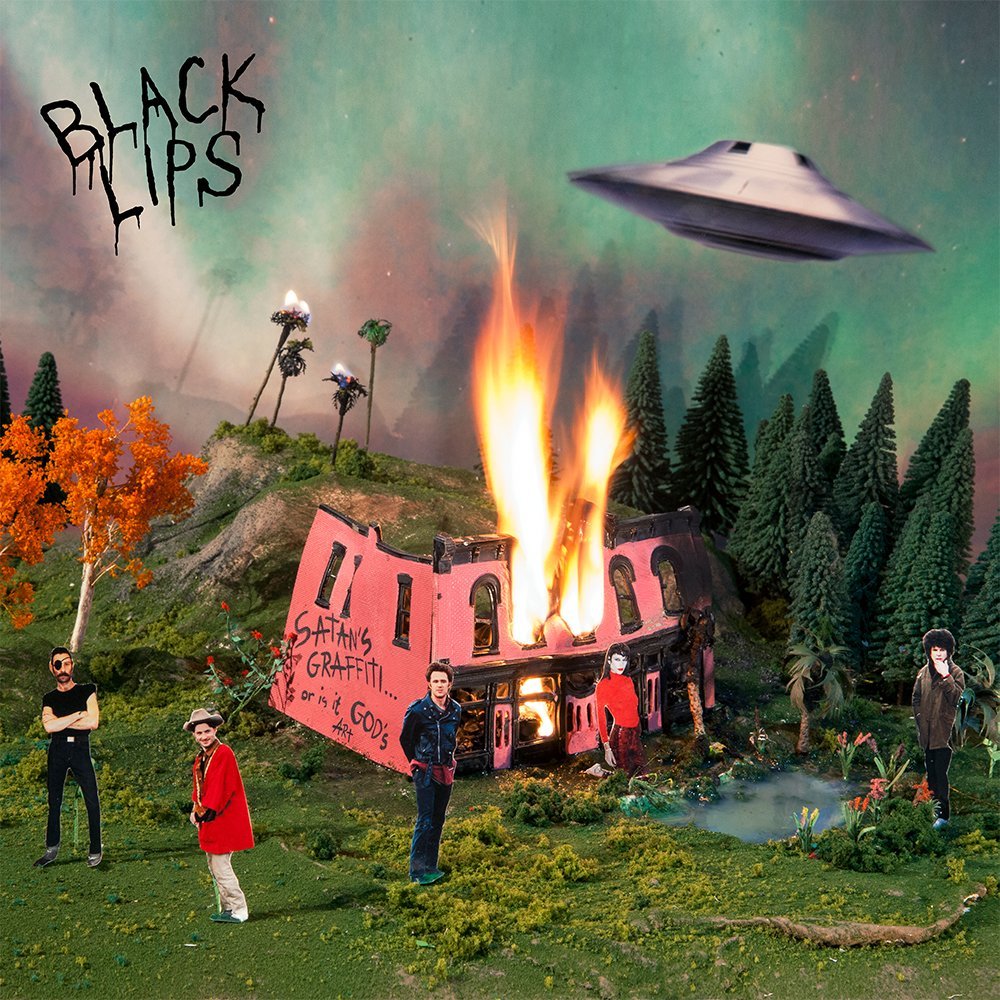 There’s very much a Beatles presence in the air here, on Black Lips‘ eighth full length album, not least because it was produced by one Sean Ono Lennon and features his mum, Yoko, on ‘Occidental Front‘, the rowdy psychobilly stompalong tune that (almost) opens Satan’s Graffiti Or God’s Art? That’s not where the connection ends either, as ‘Crystal Night‘ has an early moptops feel about it, while the Atlanta collective tackle the Fabs’ ‘It Won’t Be Long‘ in grand style towards the arse end of the album. And what a fine arse end it truly is, with the second half of this excellent long player being roughly twice as good as the first half. Which is nice, because the first half’s good anyway.

Many of the tracks here sound, as is the wont of Black Lips in general, as though they could have tumbled straight off the classic Nuggets collections from the sixties, though there is a wistful nonchalance which permeates several of them so, for example, ‘Last Cul-De-Sac‘ sounds like Ray Davies wrote it, while the wonderfully fuzzed up single ‘Can’t Hold On‘ borrows the chord sequence from The Four Seasons‘ ‘Beggin’‘.

Satan’s Graffiti… is interspersed with several short intermissions which feel a little like woozy drunken strolls through the park on a summer evening, perhaps even the early hours of the day after the most epic of parties, especially ‘Interlude Elektrik Spiderwebz‘, which is near enough three minutes long and suggests that it’s probably a good job the drug squad failed to raid the aforementioned party, where the Lips were acting out their Stooges-meets-Muddy Waters fantasies (on ‘Got me All Alone‘), and tossing free bags full of illegal narcotics to all and sundry.

‘We Know‘ sounds like Aussie alt rockers Rocket Science circa Contact High, the brilliant ‘In My Mind There’s A Dream‘ is akin to being invited to some nightmarish rodeo where, upon your arrival, you learn that YOU are the bucking bronco and there are no untamed horses in sight. It’s a real addictive number where the vocal whip-cracks are strangely reminiscent to those on punk band 999‘s legendary ‘Obsessed’ single. ‘Lucid Nightmare‘ appears to borrow the rhythm section from Adam And The Ants and both ‘Wayne‘ and ‘Losers Lament‘ are both highly intoxicated folk/country numbers.

This is all tremendously enjoyable stuff, and some of the lyrics here are full of intrigue, not least at the album’s conclusion, ‘Final Sunday Mourning‘, which states, simply, “I came across Gerry Adams on the highway, and he looked at me and said ‘Saul, you’re a miserable man’, and he had a bag of magic beans.” And let’s face it, if that alone doesn’t make you want to hear Satan’s Graffiti Or God’s Art, there is something seriously lacking in your life. Another winner.

Satan’s Graffiti Or Black Art is released on 5th May through Vice Records.