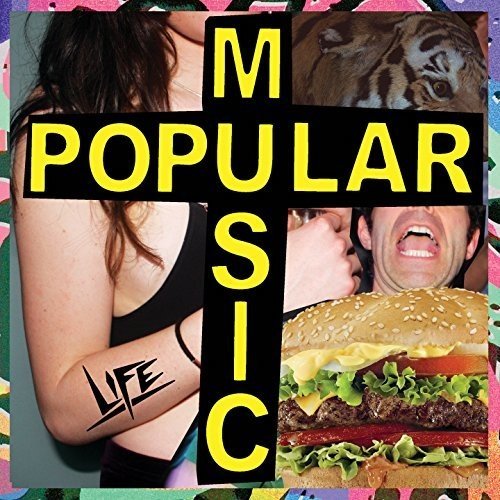 “Life?“, an acquaintance of mine sniffed haughtily, “what a terrible name for a band.”

He is unquestionably, embarrassingly, hopelessly wrong. LIFE is probably the best name for a band anybody has come up with in years. Why? Well, for a start it’s pretty much impossible to Google. Until recently, even if you searched the keywords “Life band“, pages full of fashion accessories would come up before you reached anything resembling a musical group. No, you had to type “Life band Hull” to get what you were looking for.

“But why is this a good thing?“, I hear you cry. I’ll tell you exactly why – LIFE do not want you to have it easy. If you are the kind of person who gets their panties in a bunch over prejudicial tabloid headlines linking immigration with terrorism on every other page, without ever digging deeper to get a fuller story and a broader perspective on the matter, they do not want you as fans. And why should they? Not for nothing is their debut album titled the equally unsearchable Popular Music. Quite frankly, they want you to make an effort, and if you don’t care, you may as well fuck off and die.

So it’s something of a quirk of fate then, and somewhat ironic, that the eleven tracks that comprise this debut long player require barely any effort whatsoever on the listener’s part before they burrow themselves brazenly brainwards. Hell no, these are genuine, golden, two and a half minute pop gems with a perpetual sparkle, at the same time making it abundantly clear that the world at large is an evil place right now, and these angry young men are demanding answers.

Kicking off with the furious ‘In Your Hands‘ (“Eat junk food, buy it raw, shop rich and shop poor, Keep telling your piles there’s creams for that sore“) and the Mark E Smith-meets-Pixies drawling of the thunderous ‘Sugar God‘, Popular Music is simply the most vital debut album you will have heard in some time. Vibrant, often incandescent with rage but all the while maintaining a wicked sense of humour (sample: “I knew I was a sap when I didn’t get the part / But Game of Thrones is back so I called for greed and dark” from ‘Go Go Go‘), anyone who hasn’t yet seen the band live ought to check them out as soon as possible. Their commercial success is surely only a matter of time.

‘Rare Boots‘ is like a ballsier Killers if the Bunnymen‘s Will Sergeant circa Porcupine had taken on guitar duties, while ‘Ba Ba Ba‘ out-bababa’s even Paul Weller in his Jam days (suck on THAT, ‘Transglobal Express‘). The title track, meanwhile, is a feisty, intense punk rocker of the highest order.

Comprised of eleven tracks and clocking in at less than half an hour, Popular Music is a frenzied 28 minute workout (the only reprieve coming in the shape of ‘Beautifully Skint‘, which is reminiscent of the fabulous Adorable), and boy will it make you feel good about yourself afterwards. Throw yourselves in as deep as possible and help LIFE change the world.