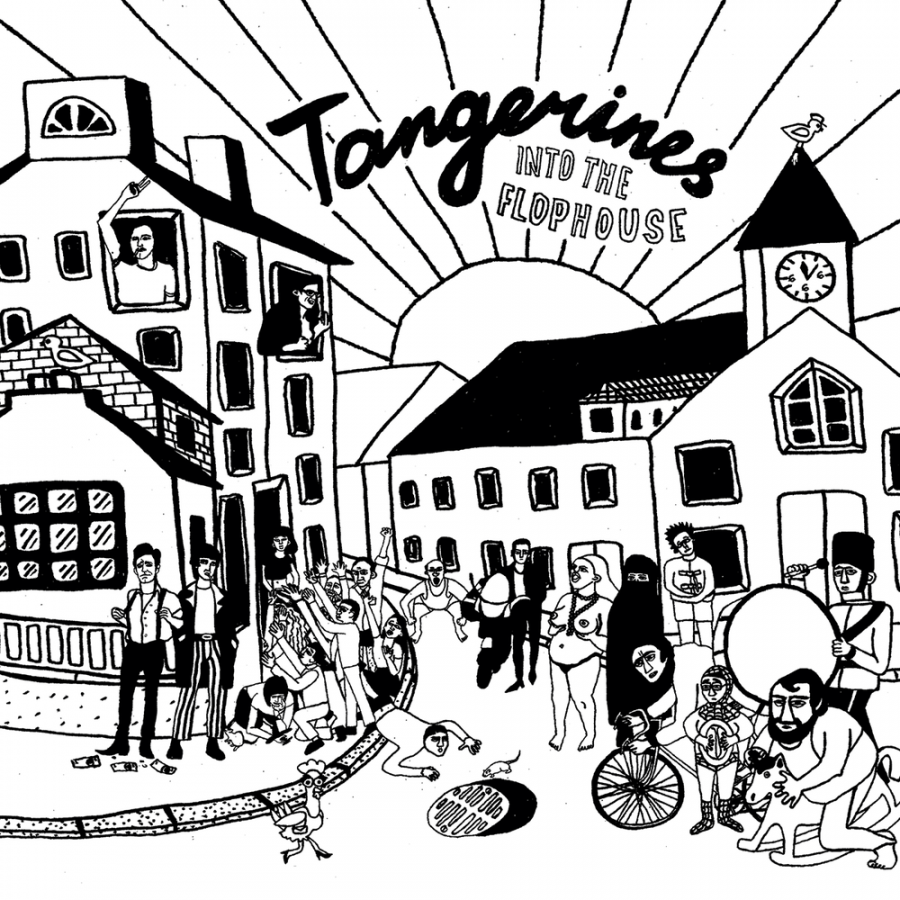 Oh man. It’s some more “Band you can Believe In” musical antics from Tangerines‘ debut album Into the Flophouse, which is essentially an overdose-tier Velvet Underground, Strokes and Rolling Stones speedball beamed straight from sunny, gentrified South London.

The album begins with single ‘Peckham Boys‘. I assumed it almost certainly referred to a load of twats in lumber jackets and straw hats, with wads full of mum and dad’s cash to throw about on vodka-infused chickpea sliders in urban outdoor spaces on top floors of car parks, rather than the South London gang.

However, on the song frontman Gareth Hoskins has this to say: “The irony is, it’s not entirely about THE Peckham boys as such, it’s more fixated on a moment in time; the rough times, the boredom, lack of funding, the shortage of affordable housing, the culture and the downwards battle that any individual faces. …Here they come, and here we all come.”

While I have no doubt whatsoever those embroiled in the poverty, isolation and dysfunction surrounding London’s gang epidemic will appreciate this sentiment in the form of a swaggering Palma Violets-ish barroom boogie, if I was 10 years younger I’m certain I’d find the song ‘Peckham Boys‘ risible. But I’m old now and this kind of Nathan Barley silliness just gives me a wee chuckle. Hipsters aren’t my problem anymore. They’re YOURS.

Otherwise, this LP is a pretty dedicated Velvet Undergound-cum-Libertines impression both in the stoned, mean city streets vibe of the arrangements, and the dramatic delivery complete with curious accent; the insistence for enunciating every other syllable in a nasty rasp, think an English Kyle Faulkner from The View, which occasionally has the unfortunate effect of sounding like he’s squeezing out a particularly difficult poo.

The song ‘Marlene‘ has maybe unintentionally funny lyric concerning to the object of the song’s desire being referred to as a “16 hour lady”. Eh? She was so attractive you’d allot 16 hours, no more, no less to the act of ‘sprucing the goose‘? Nice. Nice.

But there are lots of sunny jam-outs on this album beneath the off-putting preen. Songs like ‘Versailles‘ and ‘Lovers Night‘ work better because they dial down the theatrics in favour of vibey, looser instrumentals. It’s a shame that the album seems to come alive towards the end when they drop the act.

I’m not dismissing this record out of hand, as it’s not for me. It’s too daft and giddy to be truly objectionable. I’m sure it’ll go down a storm in the refurbished former post offices, citizen’s advice bureaus and Alzheimer’s hospitals co-opted by trendy London bars. “Can you believe this used to be a Job Centre??? Ha ha ha! What’s gwaning with you anyway?”

Into The Flophouse is out now on RIP.

1 thought on “Tangerines – Into The Flophouse (RIP Records)”