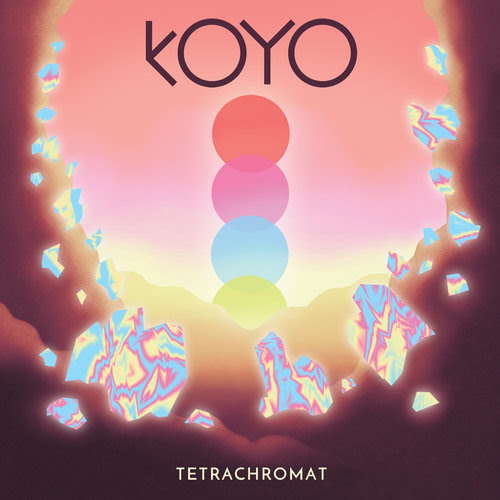 For once, Headrow House is relatively warm meaning we don’t have to watch Koyo huddled in our duffel coats; jumpers will do. The blackouts have been drawn, closing out the last of the late evening sun and the dry ice is on, alternating red and purple under the lights.

Koyo are the neglected middle child tonight, playing in between the young but very loud Wuzi and headliners Vulgarians. They have a mere thirty minutes to impress, sparkle and make the concrete floor thunder.

Tagged with the dubious prog rock label, they are in fact proficient, reflective and utterly self-effacing, a far cry from the cape-wearing and wizard-hatted indulgence of your traditional progressive musicians.

Because of their second billing, they are without the psychedelic lightshow that completes the usual Koyo spectacle. No matter. They make every minute of their set count. Each of their six songs is an intricate piece of stained glass. Koyo are at once delicate and robust. They give the impression that they have implicit trust in each other and their abilities. ‘Strange Bird In The Sky’ is the melodic opener. The repeated lyrics thread through the music which twists and turns with both freedom and control.

This is followed by ‘Jettisoned’ which sounds like dub reggae at times. Frankly, they sound as if they could play every musical genre going and with equal flair. On ‘Lost In The Kingdom’, they are accompanied by Kari, a Polish vocalist. It’s a much more upbeat song and Tom Higham, the superb drummer,  is playing in yet another musical style.

The ‘shiver down your spine’ moment is on ‘Jouska’ that they throw in halfway. The combination of Huw Edwards’s bird-soaring guitar riff and his beautiful melancholy vocal take some beating live. They finish off with ‘Tetrachromat Pts 1 and 2’, a title we can forgive them for, which has the addition of a saxophonist (as if the pool of talent on the stage isn’t enough).

They are prog in the sense that their songs are longer and they are well-schooled in music –literally. But Koyo wear their versatility and charm very lightly indeed. The album’s out in August. Buy it.