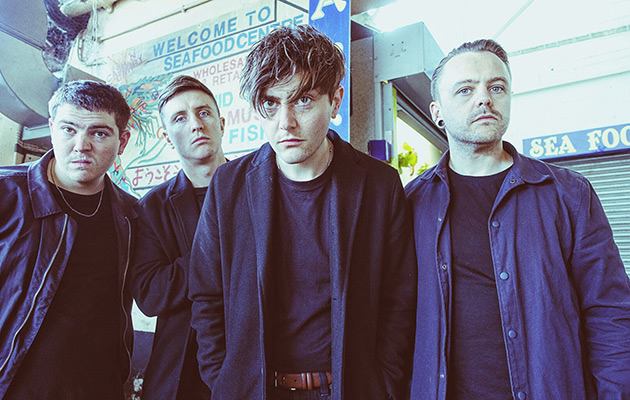 Having long been amused by the fact that LIFE‘s bass player’s name is also (what are the chances?) Loz Etheridge, the whole Matrix shit grew still weirder when I was handed frontman Mez Sanders-Green’s mobile number in order to do this interview and it was nigh on identical to my own! The band were en route to Amsterdam when I called, and, aside from what made it into the final draft of this piece, Mez fended questions about producer Ian Dowling (“he’s become one of our greatest friends“), football (“I follow Liverpool but Loz is a big Hull City fan“) and ludicrous gig schedules (“No band has ever done a tour that’s made geographical sense!“). Read on for the rest of our take on LIFE…

I have quite a bit of affection for Hull, as a mate of mine went to uni there, and he (unintentionally) threw the wildest parties, but I thought the place, despite being a tad run down, just oozed character. How do you feel about your hometown?

Mez Sanders-Green: I think Hull really does embody who we are as a band, and as people. There’s a real community feel that runs through everything, especially the arts, and poetry and all that kind of stuff. It’s a real creative community, and because we’ve always been known as underdogs, it was nice for Hull to finally have the spotlight shone on it with the City Of Culture thing. I don’t think we could have written it if we hadn’t lived here and it definitely had an effect on the album. The energy and urgency of it really sums up the place, I think.

When I reviewed your album, I alluded to the fact that it seemed you didn’t want anyone to have it easy, due to what I interpreted as a deliberately vague titling process. Am I reading too much into things here?

I think it’s definitely good when people have to try hard. I guess that is a part of it, but I didn’t deliberately set out to make it that “un-Googleable”! The name actually came to me when I was in a supermarket and I kept seeing things advertised with slogans like “This is better for your life” and then I just kept seeing the word “life” everywhere, so I thought “You know what? That could be a good band name.” But yeah, I guess it IS a bit of a quest to find us, especially as we called the album Popular Music as well, and that’s just a very vague genre description too!
But hopefully once people have been on that quest, they’ll be happy to find us. We’re really proud of the album, especially as we’re a real DIY band too. It feels like a real achievement, you know?

And so you should be proud. It’s easily one of my favourite albums of the year. It’s a frantic, furious, largely political beast, which is probably why I loved it so much.
With the shocking anti-Corbyn media bias both on print and in television though, it does look like we’re destined for a pretty bleak foreseeable future under hateful Tory rule, especially with the Brexit bullshit on the horizon. Presuming the worst does happen, how do you think we can turn things round after that?

I’m just hoping for a miracle, to be honest, and praying that the Tories don’t get back into power, or there’s a danger we’ll just fall deeper and deeper into this black hole, this abyss where the younger generation doesn’t have a voice. It’s a scary place we live in right now from here right across the globe. But music brings hope, I think, and that anger can be channelled into good art, which I believe, and hope, is what we have done.

When I saw you at Handmade (festival in Leicester) a few weeks back, I was more than impressed with your endeavour at winning a crowd over who were still seemingly standing open jawed after the IDLES experience. It’s a brave band who agrees to go on immediately after THAT lot…

IDLES are a great band, yeah, and we’ve become really good friends with them, but knowing how good they are live, we knew following them was going to be tough. But you try not to think about it too much and just make sure you’re up and ready to go. We’re confident in our own songs and our ability to win over the audience that’s in front of us, so how well other bands have gone down before us is of no relevance. We just go out and do the best we can, and we will always give 100 per cent.

Popular Music has garnered nothing but extremely positive critical acclaim from what I’ve seen. Is there a danger you’ve set the bar too high on your debut release?

I don’t know really, we’re just so glad everyone has been receiving it so well, and are really grateful to guys like yourselves and Steve Lamacq, who has been one of our biggest supporters, but we knew that if we were going to make any kind of impact with it, then it had to be a good one. There would have been no point putting out something we didn’t totally believe in ourselves, so it’s great to start building a body of work we can be as proud of as we are. I’m not worried about the pressures of the follow up though. I have total faith that we can write an even better album next time around.

If Mez and the boys keep to their word – and I believe they will – then what a belter that second album is going to be. I haven’t been this convinced a band is going to be huge in a very long time indeed. And you know what? When they do, they will unquestionably deserve it. It’s in their hands…

LIFE’s stupendously brilliant Popular Music album is out on 26th May through Afghan Moon.