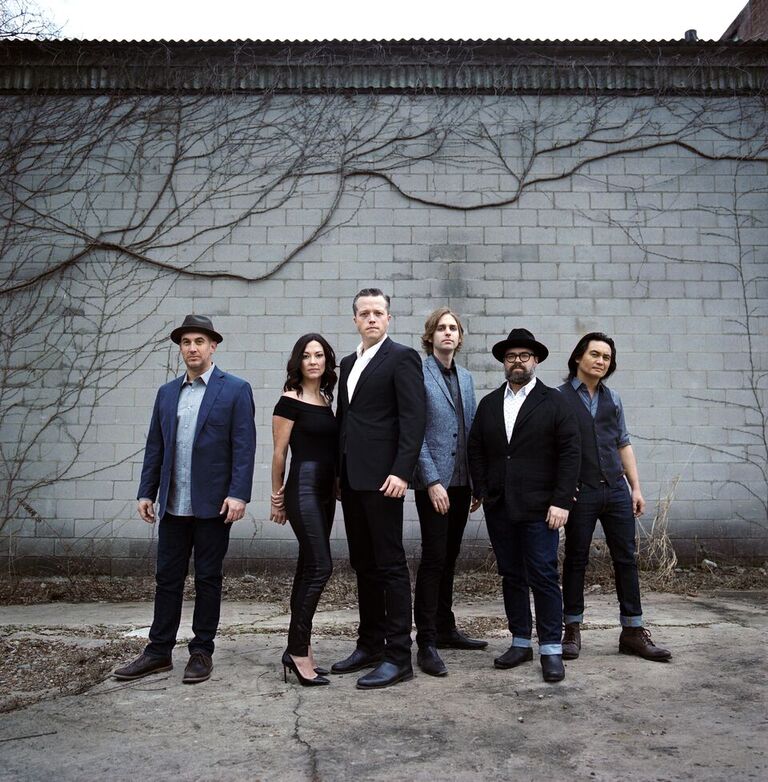 Last year at Kentish Town’s O2 venue, God Is In The TV photographer Paul Reno and I met Jason Isbell‘s bass guitarist and lifelong friend, Jimbo Hart (second from the right in the photo), after a truly stunning performance. A fantastic musician and beautifully funny guy to boot, we stayed in touch, so I asked him a few questions about the band’s remarkable latest album, The Nashville Sound, and true to form, he was only too happy to comply…

God Is In The TV: You’re one of Jason’s longest standing friends, so you’ve been through many things together, probably helped him through some difficult times, and had a ball at others. On The Nashville Sound, he sounds arguably the happiest I’ve ever heard him. If you could pinpoint a moment that turned his life around, what would it be?

Jimbo Hart: I think the pivotal moment for him, since I’ve known him, was his decision to get sober. He regained the focus, learned to learn, again (mind you he’s a pretty smart dude to begin with) and really just transformed into the much better version of himself that was already there but not there. I watched him get his mind right, again, and get his health back. It wasn’t always easy for him but he’s an inspiring guy, you know? He inspired me to do the same and in so changed my life forever, as well.

How much do you think becoming a doting dad played a part in the writing this time around?

I think him becoming a father definitely influenced his writing. I couldn’t imagine how it couldn’t have. I think we all felt that, alongside him, this time. Mercy has been with us as much as possible since day one and she’s already running the show. She’s amazing and I couldn’t be prouder for my friends.

Despite the positivity on the album, there is also a political edge – one of uneasiness about the future – on a few tracks. Previously, Jason’s songs were either more personal, or story driven, even when he was in Drive-By Truckers, a fiercely political band. As part of the 400 Unit, and with the political climate as tempestuous as it presently is, have you felt more of an obligation this time to address such issues more pointedly?

Politics. Where to begin? How do you feel about it? I think it’s a crying shame. I have many opinions about things but I’ll digress…as a musician, it’s my duty to serve the song. All songs convey a tone or mood or message that is totally up to the listener to glean in their own light. I will say that some of these songs made me stand up while recording them in the studio. Hahaha. So often, I wind up sitting down to play a part but this time, the vibe, the substance, the songs, demanded that I stand up. If it does the same for our listeners, I’ll take that to mean I did good.

What is it about being in the band that you love so much? And having met you last year, I KNOW you love doing it, as that radiance shone through!

Man, I get to play with the best drummer in the world!! Chad (Gamble) rules! He keeps me on my toes. His drumming is driven by heart and it’s really raw and honest.

Jason is the best guitarist I’ve ever played with and Sadler (Vaden) is equal on so many levels…to mention the voices of both those dudes. Derry (DeBorja) always plays the perfect part in the perfect spot in time. The way he approaches things is completely different than any musician I’ve ever known. Amanda (Shires, Jason’s partner) is like Derry in a lot of ways in that she approaches things uniquely. Sometimes, she can be very aggressive with her delivery or play something that maybe I’d never thought of. Other times, she plays really subtly and sweetly.

Oh, and I get to play great songs that resonate in my own self about people that I know intimately or maybe even myself, sometimes.

I get to hang out with cats that are just as nerdy about strings, straps, cables, pedals, cases as I am. You name it. We geek out about gear. We all have a great time together on the road and get along smashingly. It’s just the best band I’ve ever been a part of on every level.

Do you have a favourite track on The Nashville Sound? If so, what is it and why do you love it so much?

Hmmmm…I dunno that I would say I have a favorite, so far. I think every song has its own unique message and approach on a lot of levels (instrument, tonality, etc). I think ‘If We Were Vampires‘ might be one of Jason’s best songs. The rock numbers are a real gas to play. I think one of the weirdest bass parts I’ve ever recorded is on ‘Chaos and Clothes.’ I’m excited to play that one in the real world, sometime.

How involved are you in the song writing process? Any side projects of your own?

I’m not involved, at all. Jason writes on his own with Amanda’s assistance, at times. Between the two of them, there’s enough literary knowledge to fill the Library of Congress so they handle all that. We’re all allowed a liberal degree of freedom with our own parts when we record and we just try to do the best we can.

I don’t have any side projects of my own, so to speak. I’ll occasionally get some calls to play on some dates at FAME or The Nutthouse, here in Muscle Shoals. I recently did a really neat session at Sam Phillips Recording Service in Memphis with Matt Ross-Spang running the gear. Halley Phillips put it all together and that studio is so cool and vibey! That was a great session.

You’re coming back to the UK soon. What’s the thing you always look forward to most when you come over here?

Oh, man. Breakfast!!! Y’all got it down. Also, I hope I can take a stroll over to Camden and hit the Bass Gallery. It’s one of my favorite music stores on Earth. Thanks for talking with me and I hope you guys enjoy the new record.

The Nashville Sound is released on June 16th through Southeastern Records / Thirty Tigers.