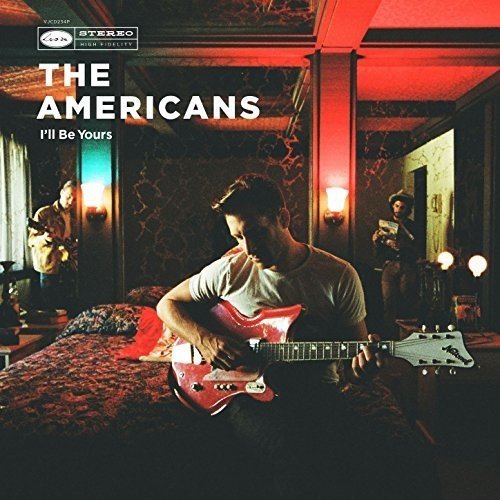 “Radio playing nothing new” bemoans The Americans‘ frontman Patrick Ferris on opening track ‘Nevada‘, which is a bit rich for a song that sounds rather like Bruce Springsteen fronting Mumford And Sons. Still, to be fair, that at least suggests a coming together of the old and the new to create something fresh. I’m not convinced that is the case here, but one thing is for sure – I’ll Be Yours is an eminently listenable set of tunes that sound like the soundtrack to a good ole boys knees-up downtown. ‘The Right Stuff‘, for instance, sounds like a particularly chipper Lloyd Cole, ‘Hooky‘ possesses the pent up, frantic energy of a George Thorogood composition, and ‘Long Way From Home‘ recalls the rock and roll pizazz of Little Richard, Chuck Berry or Danny And The Juniors.

It’s not too much of a surprise to learn that Jack White was involved in the ‘no-mark to notable’ rise of The Americans, as he, along with his illustrious friends T-Bone Burnett and Robert Redford, selected the Los Angeles quartet to appear in the recently aired PBS documentary series American Epic, a show which focused on the history of roots music Stateside since the 1920s onwards. Not that the band are exactly unknowns within musical circles, having backed the likes of true heavyweights like Nick Cave and Lucinda Williams and recorded an album full of sea shanties that featured both Tom Waits and Keith Richards. It’s fair to say that, with friends like these, they probably aren’t likely to fall on hard times any time soon.

Irrespective of such well-connectedness, you still need to have the chops to pull something like this off without coming across like sycophantic second rate imposters. Credit where it’s due then, as The Americans do somehow manage to absorb almost a century of their musical heritage into their own sound, while at the same time maintaining an identity that may not be entirely original, but is different enough to mark them out as real contenders.

It’s not all rock and roll to them though, as the more introspective numbers, such as the title track or ‘Gone At Last‘ evoke memories of the barren wastelands of Nebraska era Springsteen, yet with an affecting allure which disposes of the grim realism that the latter record conveyed.

It probably doesn’t hurt that Ferris himself is a dead ringer for James Dean, but, unlike the tragic screen idol, instead of rejecting the premise of the American Dream, this band embodies the idea that, while it might seem like an ambition of mythical proportions, maybe, just maybe, it’s worth at least making an effort to realise it. And, if they don’t, they’re going to make damn sure they have fun trying.

I’ll Be Yours is out now on Loose.