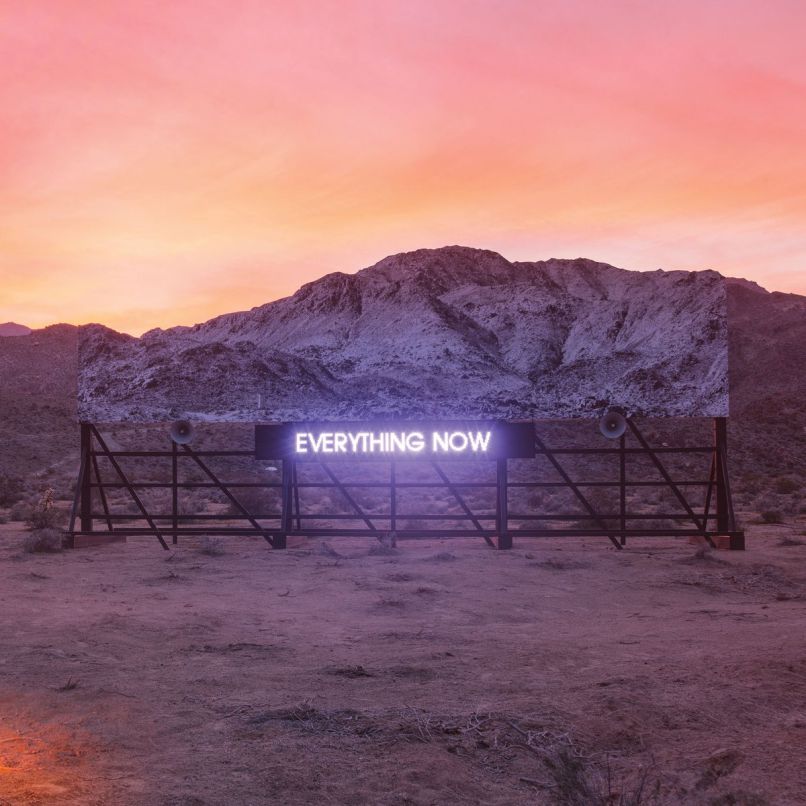 “I think the internet was co-opted pretty early on by corporations. I don’t think anybody knew when we were signing up for Gmail accounts that we would be getting direct marketing of things we write in our private emails”, observes Win Butler in an interview with website Stereogum in June. Cynicism of the digital age and its hidden consumer-exploitation abilities is what’s on Canadian indie rockers Arcade Fire minds at the moment and it seems as if their latest mission is to get audiences to wear the greed-revealing glasses from John Carpenter’s sci-fi They Live and think twice before they log in.

Even before the release of their fifth album Everything Now, the continually-ambitious group created a marketing campaign that includes bogus stories and facts about themselves that satire on the cyber problem of fake news, a premature critical music review that pokes fun at fickle fans, a stereotypical corporate logo and and a website drowned with so much suffocating pop-up information (a reference to click bait) that it’s reminiscent of MIA’s album cover for Maya.

The socially-reflective Arcade Fire have utilised marketing campaigns before (such as the mysterious imagery and calling service for religious themed Neon Bible) to stir up hype for a record’s concept but this time it’s an incredibly topical commentary about modern society that’s thought-provoking, relevant and has the potential to be powerful. But how well is this strong message projected on the 13 tracks on Everything Now and are the songs themselves any good?

Well, even from its name alone, the title track is very transparent. ‘Everything Now’ examines the immediacy and availability of media. But as beneficial as the system is, it’s also so overwhelming that it can replace any room for independent thought (“Every inch of space in your head is filled up with the things that you read”) and also can encourage an impatient Veruca Salt syndrome: “I need it, I want it. Can’t live without it.”

Arcade Fire also cleverly and comically uses the structure of the album to their advantage when presenting the theory of the internet’s monetary and engaging powers in two consecutive tracks called ‘Infinite Content’. Both with the same repetitive lyrics that play on the two meanings of content: 1) happy and satisfied 2) a large amount of information. While Win Butler sneakily admits that “all of your money is spent” on an album that includes two identical tracks that only switch in pace (from bashing rock to lonesome country).

The first and last track of the album are also replicas of each other. They remix the title track ‘Everything Now’ into an ambient hypnotic spin. As those tracks can seamlessly connect to each other, if the album is played on a repeat loop it’s like it never ends. A cycle metaphor for streaming services and a playful twist on the album format.

‘Creature Comfort’ is also an important observation on how the internet has deformed the modern mindset. A Creature comfort used to be something necessary such as food and a relaxing home but thanks to YouTube’s instant fame machine, for an increasing number of Generation Z see being famous as an essential ingredient of life and will do stupid things for it. If they don’t achieve it, they feel they are abnormal and contemplate suicide. “Saying God, make me famous. If you can’t just make it painless.” With the recent documented suicides of Chester Bennington and Chris Cornell, this discussion is strangely apt.

The rest of the album is not as strong in its concept and can be quite lyrically lazy but demonstrate Arcade Fire’s recent chapter into the grooves of dance rock and embrace of eclecticism that started with the James Murphy produced Reflektor and has now moved on with the helping hand of Daft Punk’s Thomas Bangalter.

None are classics but they show diverse influences. There’s the reggae-meets-Daft Punk’s ‘Robot Rock’ on ‘Chemistry’, the neon-lit disco of Régine Chassange-lead ‘Electric Blue’, odd funk-rap of ‘Signs of Life’ and mellow soul of ‘Good God Damn’, one of many tracks where Will Butler attempts to alter his voice to fit the mood but is perhaps best to sticking to his normal tone.

The choral baroque-pop of their beginnings may be long gone but the character of Arcade Fire: ambition, epic power and an empathetic consideration for society are still present.