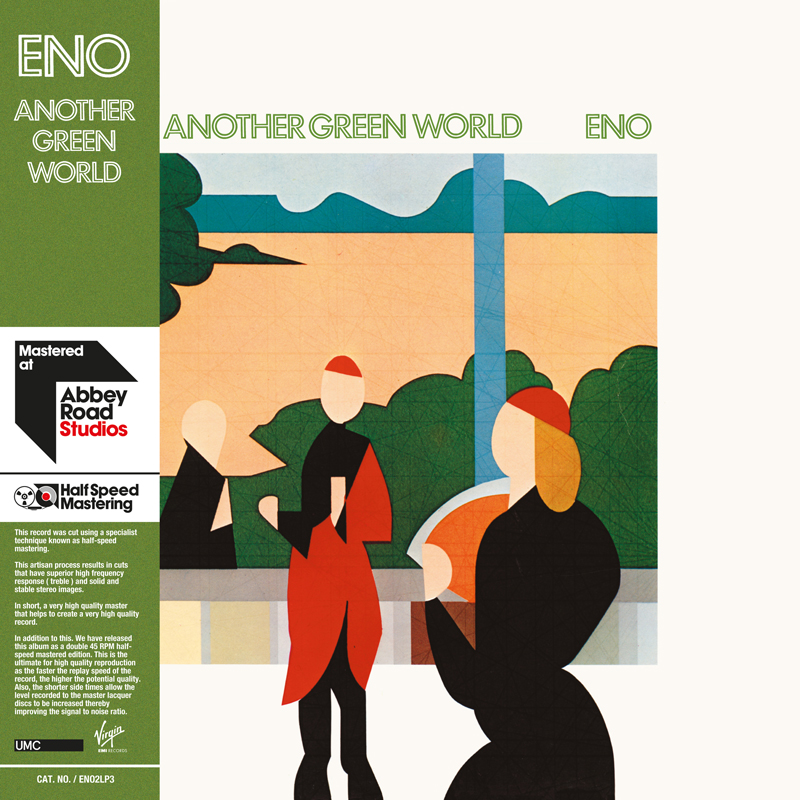 It may come as some surprise that Brian Eno considers himself a ‘non-musician.’ After all – and the re-issue of these four albums make part of that case – he has had a huge impact on the music scene for over forty years. He has collaborated with a huge list of artists, and worked as a producer for some of the most high profile albums of the last forty years.

Two events can perhaps be considered as having set him on the course of shaping post-Beatles music. In 1969 he was a student at the Winchester School of Art. He attended a lecture by The Who‘s Pete Townshend about the use of tape machines by non-musicians. He would later cite this as the point that he realized even as a non-musician he could make music. In 1971 a chance meeting with Roxy Music saxophonist Andy Mackay led to him joining Roxy Music. He later said that had this not happened he would have become an art teacher. He played synthesizer on their self-titled debut in 1972 and the follow-up For Your Pleasure in 1973. Despite making significntproducing two landmark albums, disagreements with singer Bryan Ferry and, bizarrely, getting distracted on stage whilst thinking about doing his laundry led to him leaving the band. Part of what resulted was these four albums, which mix glam rock and art-pop, now re-issued on vinyl.

Eno’s debut solo album proper Here Come The Warm Jets (8) was released in 1974. One of the first things that the listener picks up is that Eno actually a good singer – and opener ‘Needles In The Camel’s Eye’ and ‘Baby’s On Fire’ could have fitted quite happily on either of the two Roxy Music albums. His delivery as a singer is that of a more sneering Bryan Ferry – and you sense that there were a number of members of future British punk bands taking notes. ‘Cindy Tells Me’ is perhaps what the Velvet Underground might have sounded like if they came from the English countryside, as opposed to New York. As an album it’s a little more experimental than Roxy – but not impenetrably so. The highlight is the title track, which closes the album. Despite the fact that it was believed to be a slang term for urination, Eno later said that it came from a description he wrote for the treated guitar on the title track; he called it “warm jet guitar … because the guitar sounded like a tuned jet.”

Taking Tiger Mountain (By Strategy) (7) was released towards the end of 1974. Although musically more upbeat than Warm Jets, there’s a darker lyrical theme within. It has been described as being a ‘loose’ concept album, looking at topics including the Chinese revolution. The album title was taken from a series of postcards about a Chinese Revolutionary Opera, and it was on this album that Eno started to develop and utilise his Oblique Strategies postcards. These were phrases or instructions designed to break deadlock or in a dilemma situation. It’s perhaps the hardest of these four albums to get to grips with – and there’s a sense that Eno has a particuarly interesting sense of humour. Highlights of the album are the punky sounding ‘Third Uncle’ (later covered by Bauhaus on their Ziggy Stardust single) and the rather lovely ‘Mother Whale Eyeless.’

While all these albums are worth not only hearing but owning, Another Green World (9) really is the pick of the bunch. What Eno managed to produce on this album was a particular sort of pastoral electronic beauty that with its astonishing textures make for an aural smorgasbord. The Wire magazine later included this album on their list of the 100 most important albums ever made. Herein lie the signposts to his work with both Bowie on the Berlin trilogy and just why U2 were so keen to work with him. ‘I’ll come running (to tie your shoe)’ is perhaps a contender for the most lovely song he ever wrote. More instrumentals than on the previous two albums as shown by the rhythms of ‘Sombre Reptiles’, which is short but affecting. The haunting ‘Golden Hours’ is another highlight.

On 1977’s Before and After Science you can hear echoes of the trilogy of Talking Heads trio of albums he would produce on opner ‘No One Receiving.’ It’s there in the guitar textures, which seem to anticipate his work on these albums, most strongly on Fear Of Music. ‘Julie With’ indicates the move towards the ambient work he would do on the series of four albums and the still-astounding Apollo Soundtracks he would do over the next five years. Perhaps …Science is less astonishing than the other three albums re-issued – but with the benefit of hindsight (it’s a wonderful thing), it can be seen as something of a transitional work.

These albums are not intended to be the entirety of Eno’s seventies ouevre. Rather: why they matter is that they are the four art-rock albums that he mad eunder his own name, not including collaborations with Robert Fripp, Harmonia and Cluster, or the aforementioned Bowie Berlin trilogy. His ambient work – and he’s often credited with inventing the whole genre – is another area entirely. But if you want to see the lines where progressive rock and glam – seemingly polar opposites met (and not just in terms of who was playing on the records) – actually met, and paved the way for punk, not to mention how indie bands took on his services to head for stadia, listen up here.