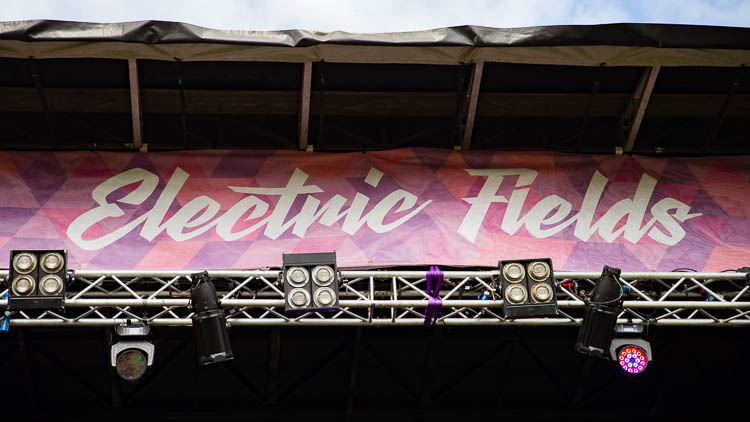 Electric Fields festival can be found in one of the most beautiful settings known to man: in the grounds of nearby Drumlanrig Castle in Dumfries & Galloway, Scotland.  It’s a decent-sized festival without being overwhelming and everything is within a few minutes walk.  The only minor downside to that is loud music from one tent interferes a little with the sounds coming from another tent or stage.

FRIDAY:  We took the scenic route – via a couple of paths we were almost certain we weren’t supposed to go down and through a barrier or two – to the main arena and the Press Tent to get the photo pass we’d need for the two-day event.  They hadn’t arrived yet and the poor two-person PR team handle the stress better than I would, and we meet what I will affectionately refer to as The Crew – photographers from a variety of publications as well as a couple of freelancers – for the entire thing.  We’ll cross paths a lot, you see.

Taking my cue from a chap photographing for The Skinny, I start marking out a list of bands on the funky lanyards we’re presented with upon arrival.  All excited about Modern Studies, we hear they’re not actually playing after all.  Re-thinking the afternoon, I settle upon Nieves.  I like Nieves, so I’m pretty excited.  Life, it seems has other plans though, because on arriving at the Redeemer Stage just before 3pm, we discover that no, it’s not Nieves, it’s actually Savage Mansion (supposedly on at 4pm).  It’s a tiny stage with a very basic lighting set up.  This could go one of two ways, really.  Savage Mansion have a strong 1990s/early 2000s vibe about them and it’s not bad, all things considered.  And then it slowly starts to unravel…  The warning signs are there – a can of Red Stripe, a bottle of Jameson’s, and a two-thirds empty bottle of Buckfast are on the stage.  When the lead singer/wailer backs the bassist into a corner, the whole thing descends into farce – particularly when the lead vocalist clambers over the barrier brandishing the bottle of Jameson’s.

We gravitate towards the Neu! Reekie! stage/tent and arrive to hear the last moments of an entertaining chap by the name of Billy Letford, telling interesting tales of crocodiles and paranoia brought on by smoking a joint while on travels abroad.  Following that was something I hadn’t expected: poetry and music.  The poetry in question was provided by the highly energetic, irreverent, and enthusiastic Michael Pedersen, the music provided by none other than Frightened Rabbit‘s Scott Hutchison.  The pair of them effectively trade poems and music.  The mere mention of Scott Hutchison’s name elicits a loud cheer from the gathered crowd.  Excitingly, Pedersen’s second collection of poems titled Oyster – and illustrated by Hutchison – is out this very day.

Over at the Main Stage is where you’ll find a nice, healthy-sized crowd gathered ready and waiting for British Sea Power.  The downside, something somewhere is slightly off with the sound balance and the lead vocals and lyrics are unintelligible.  A small pocket of the crowd is dancing, while the rest clap politely and the end of each song.  It turns out that it doesn’t really matter that pretty much all of the instruments drown out the vocals (and only appear to get even louder) because it’s still great fun anyway (including some dancing bears that I’m afraid to look at); someone to my right is also waving some ferns very enthusiastically.  British Sea Power are a band you can totally lose your shit to and still maintain all of your dignity. 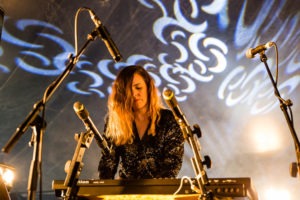 In what I nicknamed earlier in the day as The Dickhead Tent (Tenement TV Discover Stage) due to some over-eager security treating members of our Crew like crap is a stage full of people and instruments – two cellos, a tuba, a guitar, drums x2, a keyboard and a laptop – with Anna Meredith on keys and the smaller set of drums. Opening with very ominous sounds, Meredith builds a taut, exciting atmosphere.  Everyone is wearing variants of black and gold.  The drummer whacks the kit to within an inch of its life, and I’m left wondering if I should have brought glow sticks.  And now I’m completely lost, everything has melted together, I have no idea where one thing ends and another begins.  Only one track is sung, and while there’s absolutely no finesse to it, it works and is a Hell of a lot of fun.  Out of seemingly nowhere, Meredith has a clarinet.  It’s basically drum & bass and everything in between with a massive band.  I should definitely have brought glow sticks.

Band of Horses‘ Ben Bridwell (guitar and lead vocals) takes a small risk announcing the obvious – “We come from that crazy place called America,” the crowd applauding politely.  “I’m not sure you want to applaud that,” he responds.  The crowd is having a great time dancing and singing along.  Me? I’m reliving my uni days and pinching myself that I’m dancing to Band of Horses but I’m neither alone, in my room, or in my pyjamas.  Small children are running around chasing numerous inflatables and flinging beach balls in the air.  All of this proves that the U.S. blatantly does indie better than we do.  And we finally have photo passes!  Hooray! 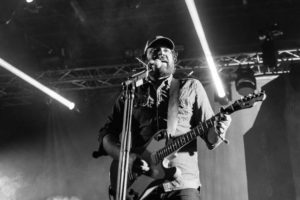 Frightened Rabbit are – according to Scott Hutchison – not a band that gets asked to headline festivals which, having seen them play a few times already, I find incredibly hard to believe.  The crowd surges forwards.  None of the pomp and flare for Frightened Rabbit, no: “We’ll just play a fuck load of songs,” they insist.  In moments, everyone is swept up in the glorious thing that is Frightened Rabbit, playing a mix of tracks, and they’re having as much of a great time as the audience.  The huge brightly lit Ferris wheel behind the crowd only adds a little brilliant absurdity to the performance.  It’s cold now the sun has well and truly disappeared, but nobody seems to mind very much.  Freezing or not – and sober or not (though I’d guess the latter is rather more prevalent in this case) – the crowd don’t let up at all, singing back every single damn word, right to the very end.

SATURDAY:  Taking yet another scenic route – this time from the opposite end (no, we don’t know why, either) into the arena, the day rather more cloudy than before, we head to the main stage for Sacred Paws.  Do you ever hear a sound check and think “What the Hell have I let myself in for now?”  The lead singer/guitarist – wearing a shirt that curiously enough matches the Electric Fields banner on the Main Stage – asks if people are hungover and a low moan and a fair few nodding heads come from the audience.  I do like it when a band takes me by surprise.  Expecting something awful and flat, what you end up with is something that’s just good fun.  At random moments they’re joined by another guitarist and bassist, filling out their sound beautifully.  Although when the additional musicians leave the stage, it does sound different but in those moments as a quartet, Sacred Paws have found their feet finally. 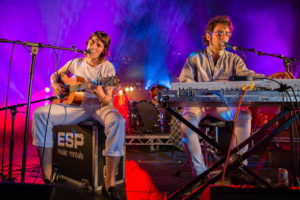 Over on the Tenement TV Discover Stage (the aforementioned nick-named Dickhead Tent) is a stressed out Aldous Harding and a chap on the Mellotron.  Running several minutes behind, a few on-stage technical problems, and she’s not playing her own guitar (coupled with a number of sound issues), the poor girl looks like she could cry at any moment.  When she does finally get going, her voice is strong and sweet, otherworldly, enchanting, and absolutely beautiful; well worth the wait.

On Friday it was the Redeemer Stage, and today it goes by the name of Big Pink – hosted by BBC’s Vic Galloway.  I trust Galloway, he’s never once steered me wrong, but I suppose there’s always a first time for everything – in this case, it’s Skjor (weirdly enough, that’s pronounced “Shore” and not the Norwegian influenced thing I came up with).  A four-piece from Edinburgh, Skjor look the part: young, pretty, a generous amount of serious and sophisticated…  So what’s the problem? The instruments drown out the vocals (although the music is very much a polished sound), and the vocals are a fraction or two out of tune and a little bland.  Then she starts shouting and the whole thing ends up way off track.  Throwing glitter/dust on the children right at the front is an odd move.  With a bit of preparation and some hard work, though, Skjor have the potential to be amazing. 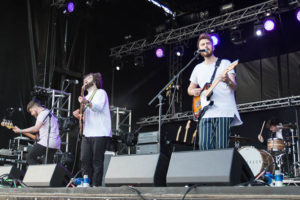 Back over to the Main Stage and Fatherson have gathered a respectable crowd even before they’ve done anything.  The sound balance is all wrong again, this time it’s too bass-heavy giving the overall sound a distorted quality.  Apart from that, as expected, the band are in fine form.  It takes a couple of songs for the crowd to really settle in and start singing along.  Fatherson manage to sound louder and bolder with each and every introduction, and the vocal harmonies are spotless – a great performance, all things considered.

PINS are an interesting bunch, really.  Sunglasses on indoors (technically, inside the Tenement TV Stage tent) and evidently the lead singer (with her star-shaped tambourine) is the fierce, sex kitten/femme fatale one – gyrating hips, hot pants, and a fur coat and all.  The backing vocals are too far out of tune to ignore – mostly they’re shouted (which makes them horribly flat), and yet they can actually sing and so none of this makes any sense at all.  In contrast, the lead singer is really good in a Brenda Lee kind of way.  Whoever or whatever PINS are, they’re unbelievably and undeniably cool.

Last time I heard The Jesus and Mary Chain was 1998 at V-Festival, back in the days when V-Festival was held in Leeds (before Reading became Reading & Leeds) and they were terrible.  This time around, they’ve moved further up the bill – and on the Main Stage – and actually, they know how to put on a great show.  Mixing old songs and new, the audience is loving it, even when they experience a small technical problem two tracks in.  The downside?  The lights are simply for special effects and the smoke from those blasted machines is far too much.  The funniest part was watching two drunk clowns/folk with white painted faces who performed with Whyte Horses Experience try coaxing and flirting with the security to let them through to the VIP area, and fail miserably. 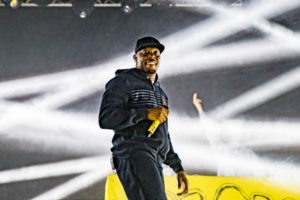 Arriving on stage around 25 minutes late, Dizzee Rascal finally gets the party going.  It’s already freezing cold – much colder than the night before – but everyone is itching to dance.  Dizzee Rascal opts for minimal banter and conversation, instead choosing to just blast out the tunes one after the other.  With hits such as ‘I Luv U’, ‘Fix Up Look Sharp’, ‘Holiday’ and ‘Bassline Junkie’ et al, the crowd go suitably wild.  Dizzee even notes how everyone keeps dancing when everything is suddenly plunged into darkness – well, of course, we do: this is Scotland, and we blatantly have the best crowds in existence.  It helps that Dizzee has them eating out of the palm of his hands.  As for Electric Fields, it’s very much a family-oriented event and seeing everyone, from children to middle-aged men and women throwing shapes to Dizzee Rascal is an awesome sight.  Closing with ‘Bonkers’, Dizzee Rascal brings another Electric Fields festival to a close for another year.  In the words of a group of guys behind me, “Dizzee, Dizzee, DIZZEE FUCKING RASCAL!”