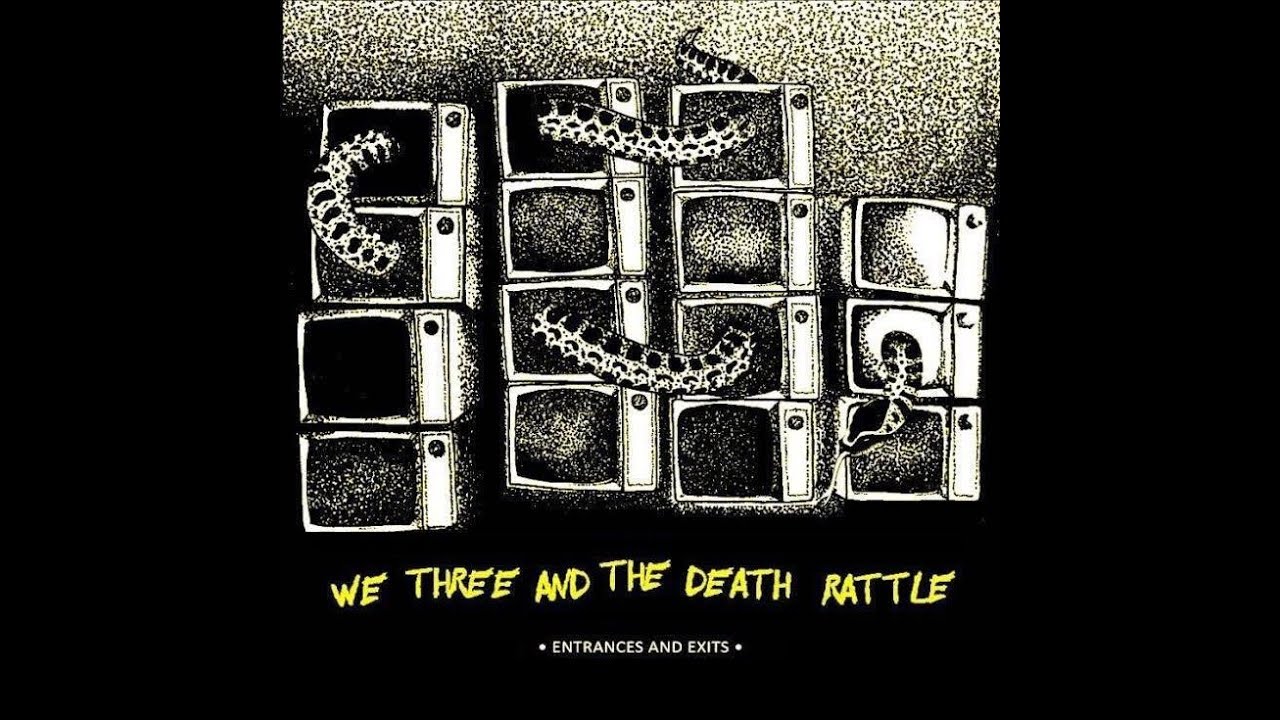 Bookended by two former Tracks Of The Day right here on God Is In The TV, We Three And The Death Rattle‘s second album was always likely to make an immediate impact, and sure as you like, Entrances And Exits is a right little belter. If you’re a regular follower of this site, then you’ll already know the intensely arresting ‘I See Static‘ and the formidable ‘(Hail Mary) Sister Six‘ from those TOTD berths, but what about the remaining tracks?

Well, ‘Stray Rounds‘ borrows a little of its melody from ‘Split Lips‘, one of the highlights of the band’s eponymously titled debut a few years back, but there’s enough of a difference to prevent it from being a mere rehash. ‘Stray Rounds‘, in facts, is altogether more explosive than its counterpart, telling of “storm warnings“, and advising us that we’d “better duck and cover.” The track fair fizzes along, whereas ‘Ex Lawman‘ is more fuzz than fizz. Yet all of these tracks take no more than two or three listens before they feel like old friends, and just for fun, if you know anyone called Colin, you should get the part where Amy Cooper sings “Calling, calling, calling, calling, calling” on a loop – for it sounds rather like she’s singing his name – and play it incessantly to see how long it takes for him to turn into Jack Torrance.

Perhaps the standout of the whole album is the practically perfect ‘Bomb Mars‘; with a driving rhythm reminiscent of Public Service Broadcasting and a killer refrain of “If I’m not me, then who the hell am I?“, this is an exciting, pulsating beast of a tune that makes you feel like you’ve thrown your foot so far down on the accelerator that you’re going to take off.

The tremendous ‘Crows‘ talks of “strange rain on a strange roof” and signals a change of pace, albeit briefly. It’s a truly striking tune that has a similar feel to The Shouting Matches‘ equally brilliant ‘Gallup, NM‘. Mostly though, Entrances And Exits is made up of crunchy, snarling guitars and often reaches the height of intensity, best showcased by the gnarly ‘I Am A Cell Of One‘, Cooper menacingly informing us “When I strike, it will be chaos / Guy Fawkes and I, except he got caught.” Anyone in search of one of the great modern songwriters need look no far than guitarist Jon Bennett, who composed all the tracks here and deserves the ultimate respect, for this is an album you’ll want to listen to all the way through every time you spin it. As an added bonus for movie buffs, each song is punctuated by a snippet from a well known film. A real Aladdin’s Cave for film lovers, if you will.

Can’t wait until its release date? Well, the good news is that We Three And The Death Rattle have given us an exclusive stream which you will be able to hear right here on God Is In The TV for the whole week from Monday.

Entrances And Exits is released on September 15th through Paw/Purr Records.