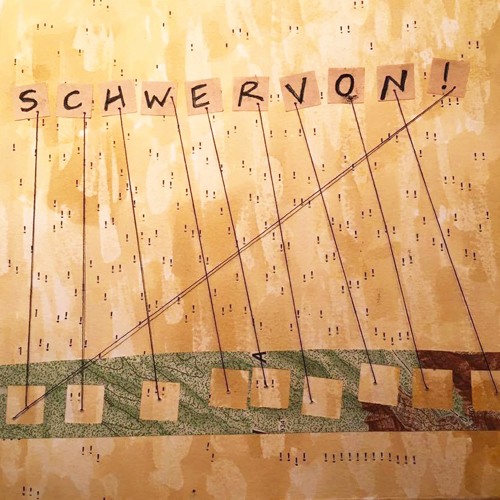 Go West, young man and woman. Five years ago, Nan Turner and Matthew Roth of Schwervon! may well have heeded the celebrated American author and newspaper editor Horace Greeley’s sage advice and sought their new collective destiny in Shawnee, Kansas but one listen to the A-side of their new 7” single would suggest that their hearts still lie in New York, the city from whence they came.

With Roth’s thin, nasal voice riding the most precarious of shotguns on the rattling stagecoach sound of their collective drums and guitar, ‘Blood Eagle’ emerges from a point in the Big Apple where The Velvet Underground and Jonathan Richman would most surely have met. “And you’ll run, and you’ll run, like a hopeless child” they sing, the song’s chorus giving lie to their steadfast refusal to move with the prevailing commercial times. And it is in this unwillingness to accept what is the common-place where the song’s undoubted charm lies.

‘Blood Eagle’ takes the listener on a delightful journey onto the other side of pop, a place where creation and contagion can continue to peacefully co-exist.

‘Blood Eagle’ b/w ‘Wrath of Angels’ by Schervon! will be released on 22nd September 2017 through Brokers Tip records, an independent label run by Bob Nastanovich (Pavement/Silver Jews), and Sea Records