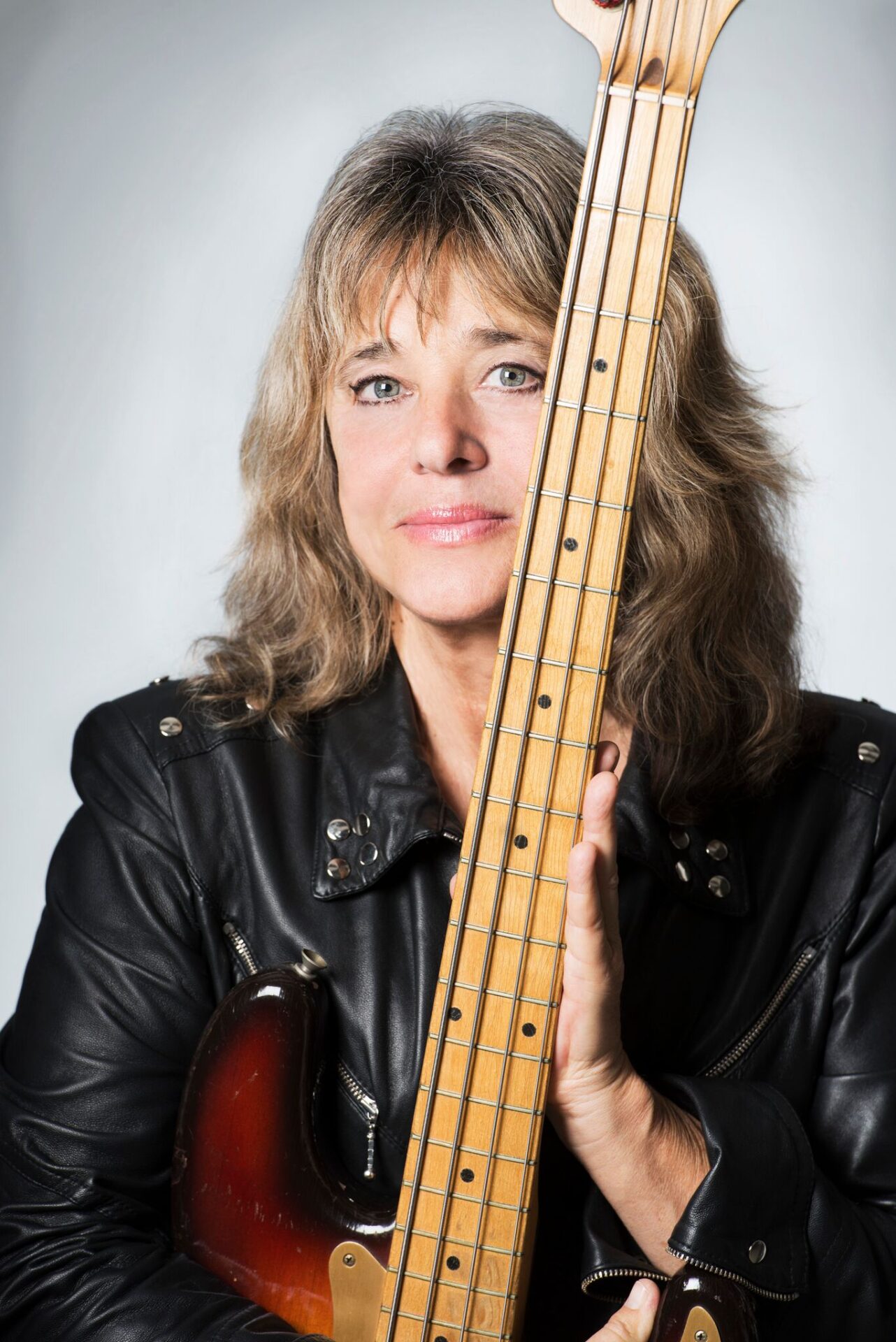 Suzi Quatro’s place in the pantheon of rock’n’roll is already assured. From the moment that she first hoved into the wider British consciousness in the early ‘70s, she blazed a trail for women in rock music in general and female bass guitarists in particular. Since that time she has had a staggering total of 18 hit singles, released 15 studio albums and sold more than 55 million records. She has also enjoyed successful parallel careers as an actress, writer and broadcaster. And the 67 year old from Detroit, Michigan shows absolutely no sign of slowing down.

Later this week, she will release ‘The Best of Suzi Quatro: Legend’, a 20 track collection of personally selected and curated songs. Taken from the original 1/4″ stereo tapes, the album features recently remastered versions of her biggest hits, including ‘Can The Can’, ‘48 Crash’, and ‘Devil Gate Drive’.

And then next month Suzi Quatro embarks on a tour of the UK with David Essex, The Osmonds and Hot Chocolate. Full details of Legends Live 2017 can be found HERE

Despite her hectic schedule, Suzi Quatro took time out to speak to God Is In The TV.

GIITTV: I wonder if I could take you back first of all to the late 1960s and the changing music scene in your home town of Detroit around that time. I am thinking more of the musical reaction to the then social disruption, civil rights and the Vietnam War and how that was reflected in the emergence of bands in the city such as the MC5 and The Stooges. What are your memories of those particular times?

SQ: Well, my first reaction is fear. I was raised in Grosse Pointe and we have our own police force. So to wake up and see soldiers with machine guns on the shops across the street was terrifying. My band, The Pleasure Seekers, had a gig in Buffalo and my father insisted on the whole family going early to the show. On the way we passed under a bridge on the expressway and saw a load of people standing on top throwing things. OMG.

GIITTV: Have you seen Kathryn Bigelow’s recent film Detroit? If so, is that an accurate representation of Detroit in the summer of 1967?

GIITTV: I think of Detroit’s Grande Ballroom as being one of the iconic rock venues. What was it like playing there with your band Cradle in the late ‘60s?

SQ: It was great, lots of UK bands, lots of premier Detroit artists, lots of Detroit energy, around which by the way, is unstoppable. We will always do what we do.

GIITTV: From photographs the Grande Ballroom looked like such a beautiful building in its earlier years. Having closed its doors in 1972 it now looks to be in quite a sorry state. What are your thoughts when you see it now? Do you think it will ever be resurrected?

SQ: I have been back loads of times since, celebrating my 60th birthday at the Motor City Casino in 2010. Since then it is slowly gaining back everything it lost. Money is being spent, buildings are being built, and people are enjoying the city again. Detroit will survive, have no doubt.

GIITTV: You left Detroit to come to England in 1971. What were your first thoughts about this country in the very early ‘70s?

SQ: My mom kept me informed about how the recession was going, that jobs were being lost, people were in a bad way. It depressed me. I was alone, following a star, and scared.

GIITTV: By 1972 you were out on tour supporting Thin Lizzy and Slade – what are your memories of that particular tour?

SQ: I hadn’t had any hits yet so was given 15 minutes at the beginning of the show. It was a great tour. I played all original music and went down a storm which my good friend Noddy (Holder) said just didn’t happen, Slade fans only wanted to see Slade……I now have a supergroup with Don Powell, original drummer in Slade and Andy Scott the original guitarist in Sweet, so what goes around comes acround. We released an album and on my Australian tour in Jan/ Feb 2017 and we were the support group!!! And the album got to t17 in the charts and is now scheduled for release everywhere else in October. It’s an excellent album.

GIITTV: I notice you played Glasgow’s Greens Playhouse that November – an iconic venue I was very familiar with in that decade; once the biggest cinema in Europe with seating for 4368 people – apart from the fact that they added an e to your first name on the actual gig ticket, do you have any recollections of that particular show?

SQ: I remember the entire tour. It was my first big tour as a solo act, albeit without any hits yet. Loved it, loved it. The Playhouse was a great venue, I was so happy on that tour, finally gigging after nearly a year in the desert.

GIITTV: You were back there again in February ’75 – by which time the venue was rebranded as the Glasgow Apollo and you were headlining – with Cozy Powell’s Hammer and The Arrows in support? Any memories of that tour?

SQ: Yes, again, good tour. Lots of poker games. And it was nice to come back to ‘that’ venue, as a hit artist in my own right. Felt real good.

GIITTV: I notice that a few years back Jon Savage selected his ‘Top 20 Glam-Rock songs of all time’ and ‘Devil Gate Drive’ made it into the list at No. 16 (sandwiched between Mud and Sparks and two places above ‘Rebel Rebel’). Should ‘Devil Gate Drive’ be viewed as a glam rock song (I think of it as being more of a rock song)? And, if so, is that a fair position for it?

SQ: I don’t consider myself to be glam rock whatsoever. I am pure rock and roll but I started to have hits in that era so I get lumped in there. I had on no make up and a plan black leather suit, the mind boggles doesn’t it. Suzi Quatro is rock and roll in its purest form.

GIITTV: Talking of rock songs, I still have my original vinyl copies of your self-titled debut album and it’s follow up Quatro. Still great albums – the likes of ‘Shine My Machine’ and ‘Keep A Knockin’’ are really superb rock songs. Where do those two albums feature in your own personal all-time list?

SQ: I love Shine My Machine, it’s about Detroit it is one of my personal choices on my new compilation album which is coming out soon The Best of..Suzi Quatro. Keep a Knockin I still do live, which says it all.

GIITTV: Moving dramatically from the past to the future, I read that one of your remaining ambitions is to make a movie. Are you any nearer realising that ambition? Yes, it’s out there. It may happen. There’s a documentary coming out next year about my life, I also just released my first novel The Hurricane which could be a movie too. I also just released my poetry book Through My Eyes which is out worldwide.

GIITTV: Again looking ahead, you are out on tour soon with David Essex, The Osmonds and Hot Chocolate. Even allowing for the passage of time and the ageing process, are these shows really that different in their format from going out on the road with Slade and Thin Lizzy almost 45 years ago?

SQ: Well the idea is the same, but we are all acts who have been around the block and back. Should be an interesting, thought provoking journey down memory lane.

GIITTV: If you weren’t doing this (touring, making music), what would you be doing with your time?

SQ: OMG, well I would always have to be doing something artistic and creative, its’ who I am.

GIITTV: Thank you for taking the time and trouble to speak to us and good luck with the new record and upcoming tour.