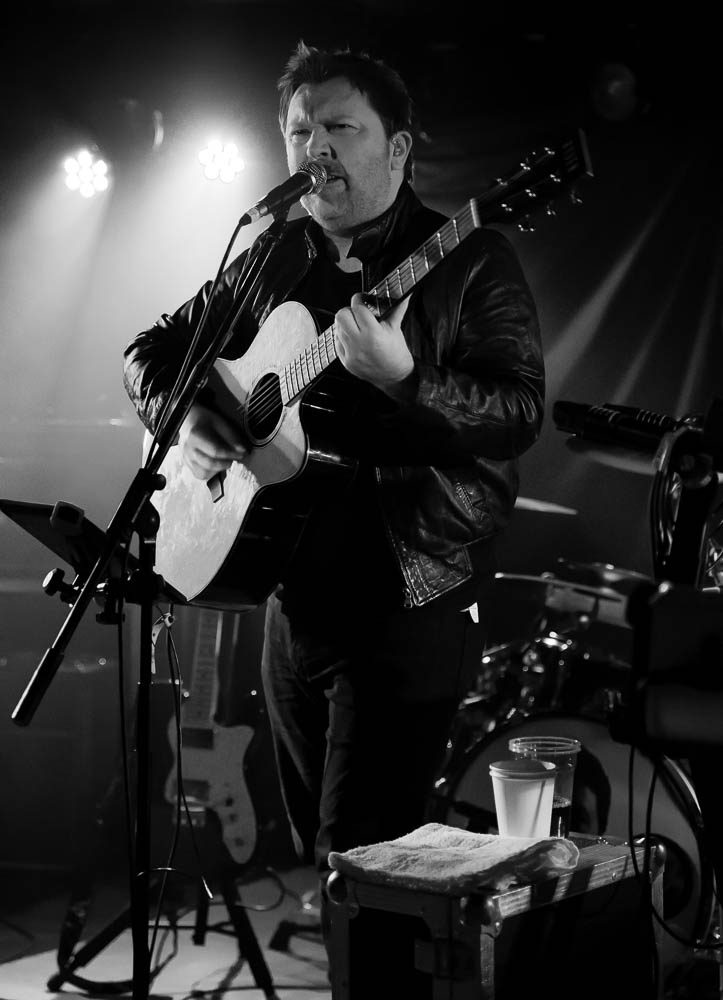 It’s no secret that King Tut’s has played host to some incredible acts over the years – and it revels in its own history with its most notable and celebrated performances on display on the steps up into the venue itself.  It’s often, so I’m told, one of the first choices for musicians and bands to play in Glasgow.  Its appeal is understandable – as long as you don’t think too much about what’s caused the stickiness on the floor that never seems to go away.

The crowd is very excitable for Paul Draper‘s first solo show in Scotland, and the chatter is loud and distracting.  You’d hope that when the opening act starts – tonight it’s Sol Croft (amusingly written as Soulcroft on the blackboard outside King Tut’s) all by himself with only a guitar – people would hush and appreciate the performance, right?  Unfortunately, that doesn’t happen at all.  What can be heard is a glorious mash of influences. One track sounds like Tom Petty; another is very much in the style of David Bowie; yet another sounds like Paul Weller.  Sol Croft either wears his influences on his sleeves or he’s a magpie (albeit a very gifted one) and I haven’t worked out which yet.  It would be nice if he could be heard properly.  People, I get it, he’s not the one you’ve paid to see, but talking right over his set pausing to applaud only when you suddenly notice the background music has stopped is just plain, damn rude.  If you want to talk, bugger off to the bar!

By the time Paul Draper and his band – featuring none other than The Anchoress (Catherine Anne Davies) herself – the audience are climbing the walls.  Opening a show with three b-side tracks is a massive risk (‘The Silence Is Deafening’, ‘Don’t You Wait…’, ‘No Ideas’) but the crowd loves it.  If I didn’t know any better I’d say they didn’t; hardly anyone is moving or singing or doing much of anything except stare.  My guess?  These are some of what’s left of the Mansun fans of years gone by, back when they – or we, I should say – were in our teens and 20s, and now we/they are upwards of 30 and 40; nobody has the energy they had 20-odd years ago.

As expected, the guitars are far too loud, and there’s nowhere near enough in the vocals.  So much of the vocals (provided by Draper and Davies) cannot be heard, but it hasn’t dampened any spirits.  The only annoyance is that there are still people fucking talking during the performance.  By the fourth track ‘Feeling My Heart Run Slow’, there’s a small bubble of movement from the crowd but it’s nothing like what it could, or even should be.  ‘Things People Want’ sees the first instance of people actually singing along.  And it gets even better when we’re treated to an acoustic rendition (stool and all) of ‘Disgusting’ – a track taken from Mansun’s debut Attack of the Grey Lantern.  “It’s a bit jazz, isn’t it?” Paul quips.  It’s the only point in the entire evening where everything is stripped back, relatively calm, and, well, slow.

We’re also treated to ‘I Can Only Disappoint U’ and ‘Wide Open Space’ from the Mansun catalogue.  The latter of these, Paul demands a mosh pit and just for a second, I’m not sure the crowd has it in them, but, thankfully, they prove me wrong and it ends up one big dance/karaoke party.  Expecting things to end with ‘Wide Open Space’ (come on, those of us who remember dancing in the clubs in the late 1990s remembers this being the last track of the night before they kicked everyone out, right?), things are brought to a close with ‘Don’t Poke The Bear’ – the opening track to Draper’s debut album Spooky Action.  “It has more of a groove,” he insists.  It’s another risk, but it’s another that pays off splendidly.

Judging by this, and the reception he gets (as people have no doubt come to expect from Scotland), Paul Draper could have spent 90% of the night blowing raspberries into the mic and the audience would still have gone crazy.  It’s been a long time coming, but it’s been well worth the agony and the wait.