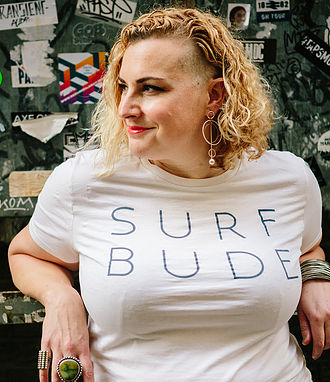 “I love record stores, the art, the unpacking and more about a record. I love how it ends: that is side one, that part of the story is over. I love how some of the classic covers have translated to be so much more than just a simple image on a cover – they are iconic and have a life and a meaning of their own. What MP3 image has crossed over and acquired meaning in a similar way?”

Dr Jennifer Otter Bickerdike’s latest book, Why Vinyl Matters: A Manifesto From Musicians And Fans, is much more than a collection of interviews with artists, labels, and industry folk about the format as it is a love letter to records and the culture and community around them. Talking to vinyl aficionados including Tim Burgess, Henry Rollins, Simon Raymonde, and Portia Sabine the book captures the enduring love of the format each of them has, but also the resurgence of vinyl and the changes as well as the consistency of the culture around it.

Otter Bickerdike says records have shaped not just her professional life – at various labels but notably at Interscope Geffen where she devised campaigns for bands including Nirvana, Pearl Jam, Gwen Stefani and Eminem, and more recently as a media and music academic and author – but her personal life too. In her introduction to the book she talks about how The Go-Go’s Talk Show was the first record she chose to buy and how it helped shape her identity, how she still hopes to add the Sesame Street disco album to her collection. When asked about which other records she thinks define her own collection she enthuses, “I know this is going to be a SUPER uncool answer – but I have to be honest: Phil Collins, No Jacket Required. I love every track on that album.

“It reminds me of being about 14-years-old. I was a lifeguard in Santa Cruz, California, where I grew up. I was over at the house of a boy I liked. His parents were out. This was a BIG DEAL as I was just starting to actively like boys. He put on his mom’s copy of this Phil masterpiece followed by ‘Every Little Thing She Does is Magic’ by the Police. Those records always remind me of that moment: when everything was ahead, when anything was possible, when it was just exciting to hold a boy’s hand.

“Fast forward about thirty years. Right after I started dating my now husband, I was telling him about how much I loved ‘No Jacket Required,’ and how so many boys before him had literally been so put off about my obsession with this LP as to end our relationship. A couple days later, he showed up at my house with a copy for me. I knew he was the one.”

Vinyl was once a punk format but Otter Bickerdike says it could no longer be considered one but is no less important for it. “Vinyl is no longer punk – It is too expensive, it takes too long to make and is not the most cost or time effective method.” she notes “There has been a big uptick in tapes, as a cheaper, faster and easier way to physically get a product out to fans. What is DIY, though, any more? What is indie? In my mind, they are fairly outdated, nostalgic labels for a different economy than what we are living in now.”

Asked about her favourite record shops she name checks Rough Trade, Friendly Records in Bristol, Music Millennium in Portland and Amoeba Music in LA which she calls ‘a warehouse of wonder’. Her go-to labels all feature in the book too – Tim Burgess’ O Genesis, Third Man, and Simone Raymonde’s ‘incredible’ Bella Union. With a heavy slant toward male voices Otter Bickerdike says it was hard to find women to interview, “The answer is I don’t know why it was harder to find women. I always say history is made by those who record it. If we look at pop culture, we have the clerks in High Fidelity being men, the whole record collecting culture has been portrayed as a straight white middle age dude thing – women are just not in the picture, which is largely untrue.

“If you go to a record store, it is pretty evenly divided between men and women shopping. Music has created the framework for my life, and I did the book as a big huge love letter to all of the indie stores, the clerks, the owners, the fans and collectors who I have influenced pretty much every area of my life. If I can get one girl out there to buy one record on vinyl, then my work here is done.”

Music, especially when made tangible through the tantalising tactility of a record, often marks out the moments of our lives. It is carried with us, weaving through the fabric of everyday life to give fantastical feeling to mundanity, and it transports us; a time machine where every hiss and click of the needle in the groove is a passport to the foreign country of our own pasts.

And beyond the personal experience music, record collecting can become a community. There is the enthused discussion of a much-wanted record found, a favorite played again, and the intimacy of recommending or even giving a record. Some of this transcends format but in a society where busyness is highly valued listening to a record, and the act of playing vinyl, is a statement of rebellion where creativity, time and attention are honoured by this connection between musician and listener.

This book captures what a vital part of identity and connection music is and why the format of vinyl, in particular, is as important to that as much as the sound it carries. Otter Bickerdike says, “Music is such a huge part of identity. It has been made invisible with streaming and MP3s. The resurgence of interest in vinyl as a format underscores how crucial the physical manifestation of important items are to showing the world and reminding ourselves of who we are and what we believe in.”

Why Vinyl Matters: A Manifesto From Musicians And Fans is available now via ACC Art Books. 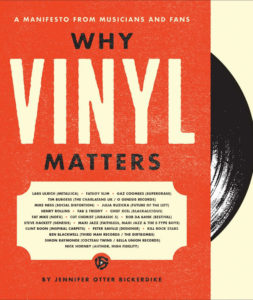