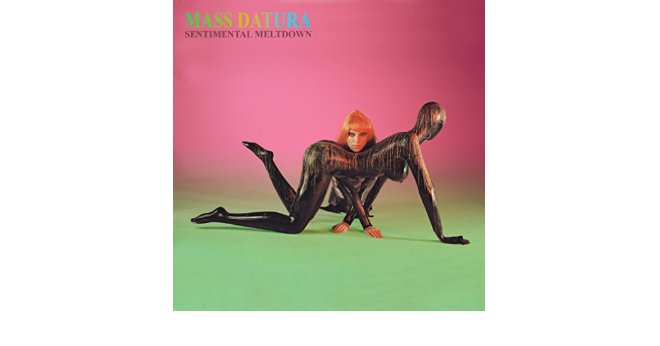 There is more energy, invention and inspiration in ‘Dream Thief’, the opening track from Mass Datura‘s startling debut album Sentimental Meltdown than some artists have managed in a whole career. Indeed, its 30-second introduction alone goes through three completely different sections before frontman and founder Thomas Rowe’s spectacularly glammed-up vocals appear for the first time, sitting somewhere in the region between Luke Steele (The Sleepy Jackson, Empire Of The Sun), Ezra Furman and, erm, Gay Dad‘s Cliff Jones. It’s an incredible track. A technicality alone stops it from being the best song of 2017; that is, that it was released on a single last year. The fact that it was actually the B-side (A-side ‘Feel Me Human’ follows next, gives some idea of the band’s quality control!)

And what a song ‘Feel Me Human’ turns out to be, a mellow All beginning, sighed backing vocals convey a real sense of yearning before the devastating distorted guitar break comes in, giving a Bowie-sized helping of drama. The motif returns throughout the song to punctuate Rowe’s impassioned vocals perfectly.

And the hits keep on coming: ‘Temporary Halo’ sounds like a single all the way, a really commercial keyboard sound and sweetly chiming guitars propel the song along, another killer intro and a kind of half-chorus that is so effective. ‘Fantasty Friction’ is a lot more gentle than the title suggests, showing that the band can reign in the drama when they want to; the track is again treated to some really nice backing vocals. It builds and builds and becomes the slow-burner of the record.

“How can you still believe that destruction can kill the beauty?” sings Rowe on ‘Hello Evil’, while an elastic bass line swirls around, like Stump gone psych-pop. Rowe is so impassioned that you buy every word, even when those words include oblique references to Humpty Dumpty. You don’t get this with James Bay.

Panic sets in as the listener realises that Track 6, the brilliant ‘Black Palm’ is the album’s penultimate song – Mass Datura have pulled off that rarest of tricks, actually resisting the temptation to throw in the kitchen sink and just concentrating on making a superb record, regardless of duration (27 minutes and seven tracks and it’s done!)

There is still time for ‘Thousand Nails’, though a dramatic closer which flits around, taking right turns when lefts were expected. It is an epic closer, and when it finishes, the temptation to just press play and circle right back around to ‘Dream Thief’ again is very strong.

Sentimental Meltdown is as strong a debut as will be heard this year.

Sentimental Meltdown is released on 6th October on All Types Of Slime Records.