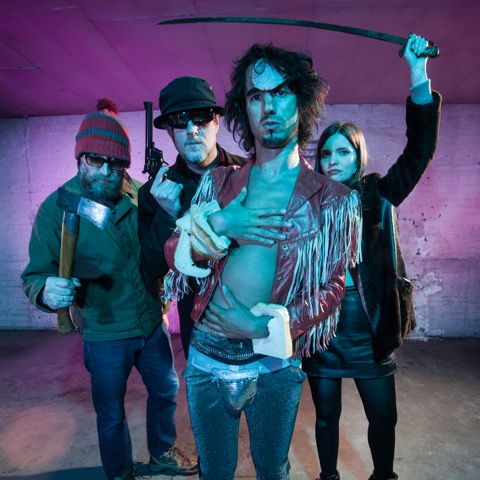 “I’m a big fan of Yoko’s 70’s albums like Approximately Infinite Universe and during a late night semi drunken recording session, I suggested to Sean Lennon – who we were working with up at his studio in upstate New York – that this crazy psychedelic freak out track that we had on the boil – but had no lyrics for – could really work with Yoko doing her thing on it. Sean got it straight away, said that he thought it was a good idea and after that brief suggestion it was never mentioned again… About 2 months later I’m at a tiny gig in some old spoon factory in Sheffield, watching a bloke play a home made synth in a shoe box with a wind up clockwork parrot sat on his shoulder, when I get an email off Sean titled MUMLANDINGZ… In the email was a video clip of his mum doing this incredible vocal over our music… The hair on the back of my neck stood on end, her voice stirs you like the most primal of rock and roll, it’s got so much spirit, it’s proper witchcraft!

After receiving the Yoko vocal, Lias Saoudi and I set about writing some words for the track back in Sheffield. A week or so later we got our friends Philip Oakey (Human League) and Rebecca Taylor (Self Esteem) to come and sing on the track and then Dean Honer & I went back to NYC to mix it. It was a song that went on quite a journey, but it was worth every bit of the trip. I see the track as a celebration of the activist in us all, the downtrodden, the ignored, people bullied by their local council, the government, the CEO’s in the workplace, the people you never voted for making a complete pig’s ear of running your cities, lunching out on decent hard working taxpayers money, whilst thousands of kids sleep rough in the street and whilst tower blocks burn. We live in frightening times, under the pretense of a so called democracy and something’s got to give!”

The band are also set to perform their biggest headline shows to date, on their final tour of the year… possibly for a while.