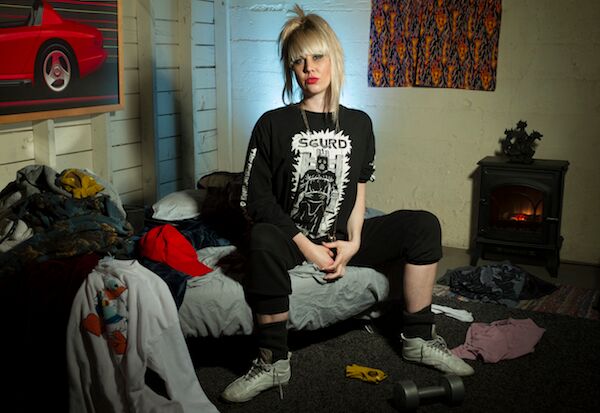 I’ve got my thesaurus out today folks, I think I’m going to need some assistance in finding an adequate vocabulary to do justice to Erika Michelle Anderson, better known as EMA. Let me tie my colours to the mast immediately, I believe that EMA has been responsible for three of the most intricately personal and affecting albums of recent times and her latest release Exile In The Outer Ring has done little to dispel the notion that she is a rare talent whose light is well and truly hidden under a mountain of bushels.

However, mere hours before she takes to The Cookie stage, I am to be found meandering around Windsor Castle some 100 miles away. This is the price you pay for choosing EMA over your wife on your wedding anniversary! Thanks to a biblical downpour on the M40 and road works in Slough I arrive just as the opening chords of ‘Aryan Nation’ throb into the walls and deflect into my heart. EMA may now be operating as a three-piece but every gaze is drawn to Erika, a striking figure reminiscent of Pris the replicant but with a warmth that could toast a teacake at a hundred paces.

The opus that is ‘The Grey Ship’ is launched early on and already the meagre audience are in total disagreement as the delicacy of her vocal melts into “Nothin’ and nothin’/And nothin’ and nothin’/I got the same feelin’/Inside of me”. EMA may be as empty inside as The Cookie basement but there is sufficient love in the room to power a small South Dakota town. Yet there is a dichotomy at work, listening to EMA spitting out the anger during ‘I Wanna Destroy’ it becomes hard to reconcile this persona with the one who oozes charm in-between songs; she is either very messed up or capable of compartmentalising her frustration at the world through her art. Never is this more apparent than during ’33 Nihilistic and Female’ which is a “fuck you” song to the music industry and live you know this girl really means it.

It’s only during the breathy ‘Blood and Chalk’ that I suddenly appreciate the clarity of the sound. As much as I love the compact and bijou surroundings of The Cookie, I don’t think I’ve ever seen an act underpinned by such competence behind the mixer. I want to go and thank her but talking to strange women on my wedding anniversary isn’t the done thing. The set is brought to a conclusion with the spite fuelled ‘California’ and ‘Marked’ and both tracks build to a crescendo of noise before being punctured and left to drift onto a, by now, truly gobsmacked crowd of believers. Then, just as she is about to leave the room, she re-mounts the stage and as if reading my thoughts, Erika winds up her band of futuristic troubadours and hurtles headlong into the evil that is ‘Butterfly Knife’. No set by EMA would be complete without the haunting caterwauling and Stooges riff which carries the song through to its inevitable conclusion.

Then…she’s gone. The lights come up and those present turn to face each other with a quizzical “wow” expression etched on their knowing faces. EMA should by now, be one of the brightest stars on the planet; a nihilistic version of Lady Gaga with an intelligent agenda and a penchant for showing the world an ugly side to life. Quite why she found herself in Leicester on a Saturday night with so few UK tour dates I have no idea but rarely do I leave a gig wanting to stop strangers in the street in a bid to convert them. Occasionally, just occasionally, you find yourself in the presence of beauty, barbarism and huge cultural significance and, given my travails around Windsor earlier, I got to experience these traits twice in a day. I just hope the value of EMA lasts just as long.