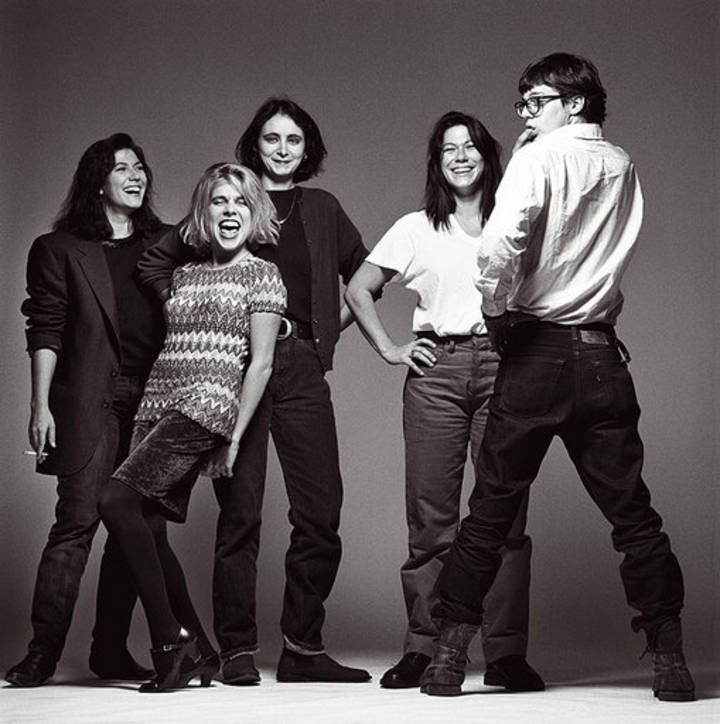 It’s no exaggeration to say that there’s a real sense of expectation in the air at the ABC tonight. The Breeders earned the status of cult band many years ago – but perhaps due to the fact that releases have been occasional rather than constant (just four albums in the space of 27 years) – the sense of awe and wonder about those releases or tours mean that the start of their European tour is a big deal for those present.

First up, though, are support band PINS. The best bands have a sense of being a gang, and these five Mancunian lasses definitely more than have that air about them. Opening with last year’s single ‘Trouble‘ (you can pick it up on the merch stand on cassette – it’s the first time I’ve bought a cassette single in many years, but then I’m not a hipster), with its goth groove it makes sense that they are signed to Bella Union, the label helmed by former Cocteau Twins Robin Guthrie and Simon Raymonde. There’s a danceability with a krautrock influence here that is enticing and tracks like the current single ‘Serve The Rich‘ suggest they can progress yet further.

As we wait for our headliners, the t-shirts on display (on the punters rather than the merch stand) – Sub Pop, grunge, indie – give a sense of where The Breeders first came from. Lead by Kim Deal, they were once talked about as being the ultimate indie supergroup. When the band debuted with the Pod album, back in 1990, she was the bassist and singer in the Pixies, a band who should need no introduction. Yet the Breeders took on a life of their own. Their second album, Last Splash, released in 1993 in the aftermath of her supposed day job’s breakup, sold over a million. It’s the line-up that made that record – Deal, her twin sister Kelley on guitar and vocals, Josephine Wiggs on bass and drummer Jim MacPherson – that are here tonight.

“We’re The Breeders from Dayton, Ohio” announces Kim as the band come on stage. “We’ve got a Scottish tour manager” Kelley informs us, “I can’t understand a fucking thing he says!” It must be working though, because despite a few nerves, they give us a near on two-hour set.

There had been rumours of new songs for years – but that aforementioned merch stand is where you can get the first new music in eight years: a 7″ single containing the new song ‘Wait In The Car.’ This is prime Kim Deal, barely more than two minutes long, a song to make you want to punch the air. This gets a warm reception – and its b-side, a cover of Amon Düül II‘s ‘Archangel’s Thunderbird‘ also goes down well in the set.

There may be a few bum notes throughout the set, but the crowd is hyped up and prepared to forgive them anything. Patient when instrument changes take a while – it somehow seems not to matter. After all, with the set list drawing right across their career, how could it? When Kelley was in rehab in 1995, Kim had her own band The Amps; the single ‘Tipp City ‘ from their only album Pacer gets an airing tonight. Perhaps inevitably, the biggest cheer is for ‘Cannonball‘ – the single that lead Last Splash into seven figures of sales. Yet it’s far from being the only song the crowd knows. From Pod we get ‘Fortunately Gone‘ and their cover of The Beatles‘ ‘Happiness Is A Warm Gun.’ Across the years we get ‘No Aloha,’ ‘Off You‘ and ‘Do You Love Me Now?’

When they come back on for a rapturously received encore, they start off with ‘Gigantic,’ the Pixies song written and sung by Kim that showed there was more to that band than just Black Francis. There have been people yelling for ‘Saints‘ all night, and when they finish with that and ‘Iris‘ it brings home just how fantastic The Breeders are. Crowd pleasing? Sure – but when most people are struggling to get by financially, why is that a bad thing? Above all, this gig serves as a reminder as to why their return was so anticipated. There are two more 7″ singles mooted – how many more excuses do you need to catch them live?