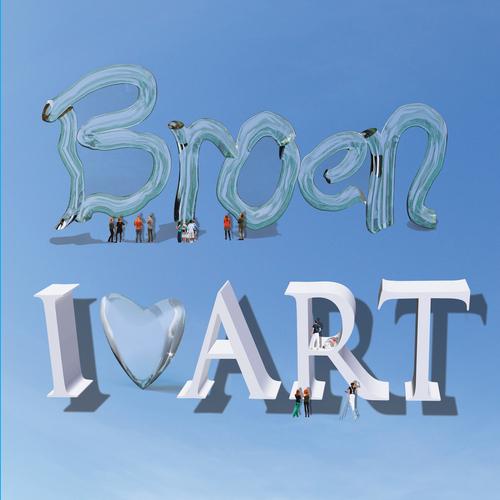 “Building bridges” was the official slogan of Austria’s Eurovision Song Contest in 2015, with the aim to connect borders, cultures and languages. Young Norwegian five-piece Broen speak of “building bridges” in their track ‘<3′ and their name is Norwegian for bridge. Their goal however is to be a label-obsessed critic’s worst nightmare, by building bridges in genres – from rap to jazz to electronica to splashes to water sound effects – that makes their sound eclectic and undefinable.

Broen – made up of singer Marianna Røe, synth player Anja Lauvdal, Guitarist Lars Ove Fosssheim, drummer Hans Hulbækmo and also a tuba player Heida Karine Johannesdottir Mobeck  – could be the sound of the future. Using a text language symbol in your album name for I <3 Art certainty shows the first sign of a modern mind and the use of robot voices in ‘(Waters Changing)’, ‘Water Is My Mirror’ and ‘<3‘ could be a futuristic omen of a world where speech synthesis could substitute human vocalists. Yet it’s the way that the group view the world musically and philosophically as a united force that makes seem visionary.

With influential record labels such as Jazzland Recordings, Norway plays a big part in the current wave of jazz enthusiasm. Broen have embraced their nationality status with Hans Hulbækmo’s jazz high-hat pace at the base of the majority of the tracks and Anja’s moody tuba adding a quirky edge in tracks such as Black Line’. Also like jazz bands, they use improvisation during rehearsal practice as their method of creating instantly new songs.

This evident love of spontaneous future-soul jamming is one of the reasons why Broen’s I <3 Art can be comparable to Hiatus Kaiyote‘s adventurous 2015 album Choose Your Weapon. The other reason is it’s unpredictability in time signatures and abundance of genres layering on top of the jazz vertebrae.

First there’s rap. Marianna Røe’s poetic rapping style is similar to Kate Tempest at her most calm and like Tempest her lyrics are meaningful and philosophical. “Take your pick of our slaves.” (Serenade) and “there is a great divide between me, myself and I.” (Black Line) sound like lyrics Tempest would say, although much of Broen’s album is concerned with time, nature and consciousness rather than activist thoughts.  It’s worth noting that Røe’s voice is not particularly distinctive though, even when she switches to more traditional singing, demoting her position as an equal member of the group rather than the stand out face of the band.

What’s ironic though for a five piece that could represent the future of music is that I <3 Art includes odes to older music, including the squelchy early 21st century British Hiphop sound of Roots Manuva’s ‘Witness (1 Hope)’ on ‘You (Detective)’, a similar Minimoog synth hook similar to Paul McCartney’s Wonderful Christmas Time on the cheerful‘ Time’, the distant metallic percussion of Eric Serra’s Nikita soundtrack on ‘Water Is My Mirror’ and the airy intellectual electronica of The Knife’s Silent Shout is present on ‘<3’.

At eight tracks long the album is rather short and the tracks aren’t particularly captivating or memorable. Furthermore, the bridging of style in genres and vocals take Broen away from having a particular identity which makes them stand out. That is aside from the clever inclusion of the tuba, which could have been used more. Although perhaps being called the same name as a popular Scandinavian noir (we call it The Bridge) might just them get a bit more attention.