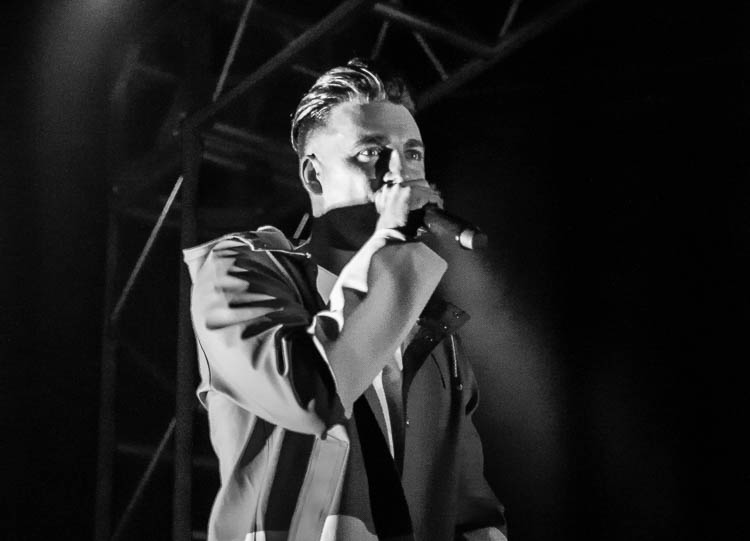 Ask almost anyone around here and they’ll probably tell you how great the Barrowland Ballroom is.  It even calls itself Scotland’s Premier Rock Venue.  I wouldn’t go that far…  Ask me, however, and you’ll likely be met with a look of disgust.  That said, there are worse places.  Previous visits at least showed off how good the sound is, so while the Barrowlands isn’t on my Top Places To Go To list, it does have at least one redeeming quality.

Opening the night, The Dykeenies – who sound pretty good on record – offer a bit of a party atmosphere with tons of energy.  They start off a little shaky; the vocals are a fraction or two out of tune, but they manage to sort themselves out for their second track.  By the end, though, everything has totally gone to shit.  The vocalist is now massively out of tune – probably down to the fact he insists on shouting and scrunching his body up to “sing” instead of actually attempting to sing.  Please, God, make it stop.

Thankfully we don’t have to wait too long for The LaFontaines.  The bit between bands where one bands exits and another begins setting up is the most boring moment known to man, save for, perhaps, watching paint dry.  But it is a very close second.  Something weird happens, too.  Suddenly the room is filled with the sound of shit dance music from the late 1990s.  And there ends the part of the night where things can actually be heard properly.

The LaFontaines enter to loud, rapturous applause and cheers, and pints glasses held aloft (no doubt to be thrown as soon as the notion takes said beer-holder).  Knowing that Recorded is different to Live doesn’t mean it’s impossible to be stunned by the difference between the two.  Clearly recording the album restrained the band quite a bit.  The album, while still essentially being a record by a rock band, has more of a synth twist to it.  Live, they seem to have done away with the synth sounds – or least it looks that way.  But, that aside, they still manage to re-interpret their own album (their second, Common Problem) really well.

The sound coming from Kerr’s mic is bloody awful.  I can’t hear a word he’s saying – neither lyrics nor chatter.  As it turns out I struggle to recognise music with lyrics if I can’t actually hear the aforementioned lyrics.  The photographers get the first two songs and that’s it, and there appears to be some snobbery going on amongst them – not cool, Glasgow.  Not cool at all.  On the plus side, my photographer companion rejoins me sooner and helps me to decipher some of the tracks.

The drummer is mostly hidden behind a ton of scaffolding unless the lights are in full swing and, I have to say, it looks really odd.  According to Kerr, it looked better on paper, but it is essentially scaffolding and coloured tape, trying to match the cover of the album and falling just short.  Speaking of which, the drummer Jamie Keenan has written a now sold-out book titled The LaFontaines Solve Twelve of Life’s Most Common Problems to complement the album.

Giving up trying to work out which song is what (even though the title is on the tip of my tongue – very annoying) I try to enjoy things as much as possible.  Apparently, the audience this evening has other ideas, though.  Typically – going by previous LaFontaines gigs – the crowd are friendly, polite, and are a joy to be around.  Tonight, however, some quite frankly rude people have come out of the woodwork, most notably the dickhead who knocked my photographer to the floor and injured her without even bothering to ask if she was OK or help her back up.  There’s always one person who spoils things, eh?  And the constant chatter.  There’s obviously an issue with the microphones and the expected imbalance between vocals and guitars, the constant bubble of talk is a massive distraction.  I’ve been disappointed by a crowd’s lack of reaction to a show before, but never have I ever been ashamed of one; tonight, I am ashamed.

Throwing in a small handful of older songs towards the end, including a fuzzy version of ‘Shark In The Water’ – which sees Kerr clamber up the scaffolding and finishing the song from the very top, and ‘Under The Storm’ rounds off the night brilliantly.  Let’s face it, they can’t not play ‘Shark In The Water’ now, no matter what they do!  The LaFontaines put on a perfect show whatever the setting, it’s just a real shame they were let down by things outside of their control.  And no, I won’t be rushing back anytime time soon.