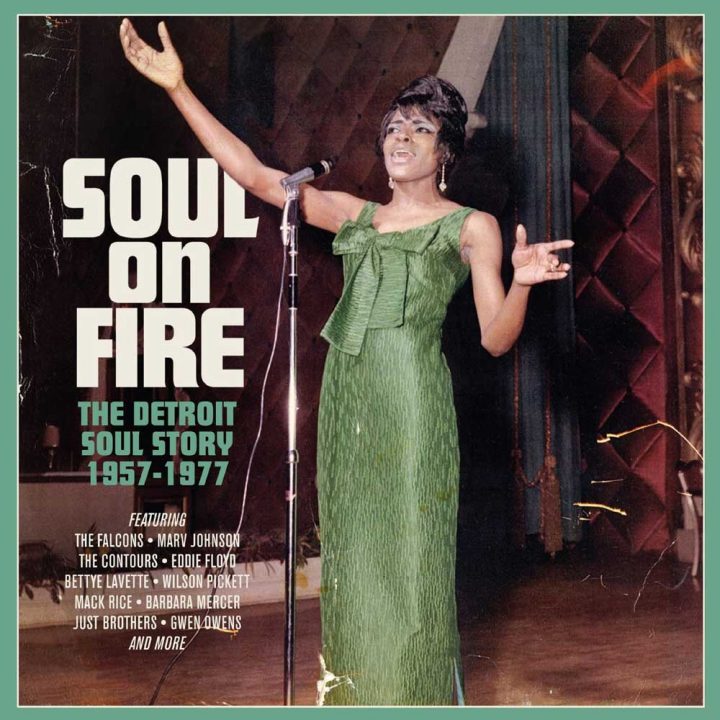 The main mission of archival releases and compilation albums is to trace the history and the developments of a musical scene or movement, providing sufficient context through the musical selections and liner notes to paint an accurate portrait of a specific time and place, the social and creative atmosphere around it, and more often than not, the particular dynamic in which these environments distributed and commercialised their material. With Soul on Fire: The Detroit Soul Story 1957-77, Cherry Red Records have undoubtedly delivered on that mission, highlighting the booming musical culture in the capital of Soul Music, home to the world-famous Tamla Motown, while also acknowledging the importance of the small-scale and independent labels that contributed most of the diverse and exciting sounds coming out of Motor City in the two decades it covers.

At a whopping 86 tracks, this 3-disc monster is a comprehensive education on how a local scene evolves through the years, the array of sub-genres, trends and styles coming in, the technological advances that made such progress possible, and the vision of its crucial figures. Cherry Red focuses on the work of legendary producer and entrepreneur Robert West, whose tireless efforts and enormous support helped mold the sound of Detroit’s ever-growing R&B landscape. Starting in ‘57, a time in which doo-wop was still the music of urban African-American youth, Soul on Fire chronicles the years where rock & roll and Gospel influences were being solidified into the identity of what we now call Soul.

One of this collection’s key accomplishments is this precise emphasis on chronological detail. 1957 marks West’s first foray into the music business, with the establishment of the Silhouette label, mostly known for its flagship group, The Falcons, whose single ‘Sent Up‘ was the imprint’s very first release and appropriately opens Disc One. In fact, The Falcons are West’s most important artists, the band he personally managed and that accompanied him in the different record labels and ventures he undertook. Their multiple appearances in this compilation illustrate not only the musical evolution — from compositional ideas to actual production techniques — of an individual band but that of the entire Detroit circuit. Also comprising this first chapter are wizard guitarist Marv Johnson, Brian(t) Holland — who would later be part of the Holland/Dozier/Holland songwriting hit factory for Motown —, The Fabulous Playboys and The Primettes, an early version of The Supremes, that released ‘Tears of Sorrow‘, the single that kick-started West’s most successful label, Lu Pine.

Disc Two documents the Lu Pine years, the time where both West and Detroit Soul were the most prosper. This is by far the most musically interesting of the three records, featuring some of the essential performers of the time, such as Sax Bari, Betty Lavette, Eddie Floyd and Falcons collaborator and absolute legend, Wilson Pickett. We can hear the great sonic diversity in 60’s Detroit Soul; wunderkind Joe S. Maxey brings the Latin-tinged ‘Right On!(The Cream)‘, while the Gospel call-and-response is the main ingredient in Tina Marvel’s ‘Promises You Made To Me‘. There’s a lot of surf-rock in the Just Brothers instrumental ‘Sliced Tomatoes‘ (later sampled by Fatboy Slim for ‘The Rockafeller Skank‘), and Eddie Floyd’s ‘Set My Soul on Fire‘ gives us a driving beat with a groove that anticipates the rise of Funk.

The last chapter in this collection goes through the catalogue of West’s later labels Puff, Sidra, Bump Shop, Big Wheel, Jodi-Pat, etc. During this time, Soul music takes a more ambitious direction, with bigger orchestral arrangements, more complex vocal harmonies and tighter rhythms. It’s the time where Funk and Disco come out of their shell and become considerable musical forces, which becomes evident in tracks like Dee Edwards’ fuzzy ‘Why Can’t There Be Love?‘, Sunny Munro’s ‘Open the Door to Your Heart‘ and the Disco adventure ‘For The First Time in My Life‘ by Michael Valvano.

86 songs may be overwhelming for many listeners, but this treasure trove of soul-soaring gems by Cherry Red is definitely worth the deep dive. Robert West’s contributions to the black music of the second half of the 20th Century make him a fitting reference point to address Detroit’s rich musical past, but the most important lesson here is that music scenes are always in constant transformation, and that Soul music is so culturally significant because it was a product of its fascinating time.