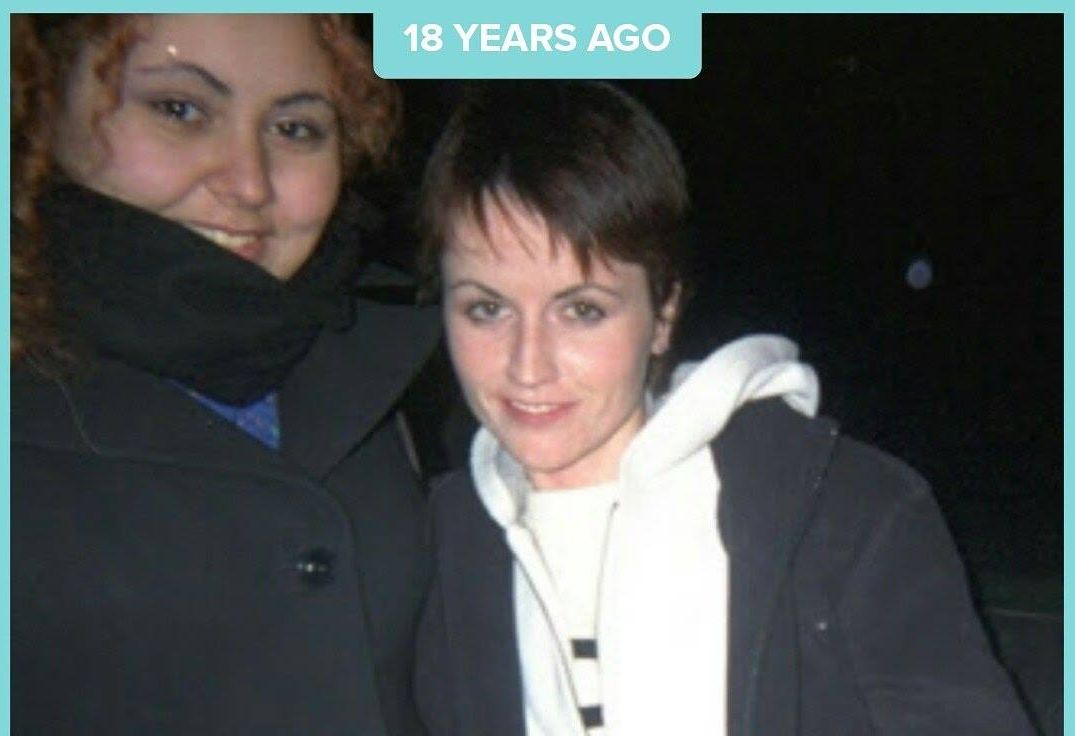 I was sixteen years old when I first met Dolores O’Riordan for the first time. Yet she kept looking at me as I was trying to put random English words together to express my appreciation of her music, until it seemed to dawn on her that it wasn’t the first time she’d met me. She was adamant she had seen me two days prior, as I was just standing in the crowd at The Cranberries‘ gig. She said she remembered seeing me in the first row because of my “Lovely Red Head.” That nickname stuck for many years to come and was the beginning of a fan-idol connection that in most cases would just be described naively dreamy at best. Stupidly impossible at worst.

As news broke about Dolores O’Riordan passing away at 46, in London, I am sure many people, and “fans” I can name by names, felt their heart crushed at the news because of that special relationship they all had with her, because if you ever had the chance to talk to her once, she would’ve pulled you in and made you feel special, not just in words but in actions. I cannot count the times she put names on guest lists; she used to personally invite her fans to private events as she knew what it meant to them. In recent years with The Cranberries, she had taken at heart to either call people in the crowd by name or actually pull them on stage with her; stages usually in front of tens of thousands of people.

Dolores was the core of a band who, at that point, had already sold more than 20 million albums worldwide and it was peaking; hit after hit to levels of popularity that got one TV Show found the excuse of setting a scenes in a club, just so they could have The Cranberries feature in them (Charmed). And yet this woman cared about every single person she came into contact with, even from such a pedestal she could understand and give that care and attention to people, knowing that what were little gestures for her could’ve had a bigger, better significance for all the receivers who looked up to her.

Every single time I got to talk to her the word “Dreams” would come up. It would be in her invitations to “follow your dreams”; she possessed the kind of cheesy teenage naivete that I have never seen before or after amongst music artists. Her lyrics were the first thing to reveal her sensitivity: she possessed the raw, genuine sensitivity of a teenager, and it can be seen in every song that bears her signature honesty. She was blessed and cursed with that heightened way to feel things deeply, and just like a romantic poet, she had to jump into the emotions and come back every time to tell us.

She may have started lost in romance and heartbreak as depicted in the first Cranberries’ album Everybody Else is Doing it, so Why Can’t we, but her softness and mindful depth was always there. Whether it was talking about the issues of the modern world and politics starting with the ever popular ‘Zombie‘ from their second album No Need To Argue, growing into a mother with the confusion yet adoration that experience clearly brought to her from ‘Animal Instinct’ and ‘You & Me’ from their fourth album Bury The Hatchet, and subsequently in her solo works writing songs for every one of her children: Taylor, Molly, and Dakota.

As the frontwoman of an otherwise all-male band in the 1990s, she represented unusual egalitarian views gender-wise as her defining traits were never connected to her femininity, but rather on the power and energy of personality which, even as the only female present in the group, made her “the band”. People did not necessarily find her feminine enough to see her as beautiful but all the girls I’ve known and met (and was part of) looked up to her as she gave us a new standard to aim for because of the way she always seemed to be so at ease with herself and with never a need to try and show off: she gave girls a new option to go against the prominent female objectification that was the current.

She was paying the toll for that open exposure: before being diagnosed with bipolar disorder in 2014 she had often been exhausted and stressed by the extensive touring she would enthusiastically undertake but that would have often resulted in rescheduling or cancellations. At no point, no exhaustion or stress ever made her any less than gracious whenever she was interacting with us.

She was an outstandingly gracious human being and that is the reason why her art speaks so clearly and honestly to the millions of people she touched.

Most artists are mourned over projections people were fed by media or indirectly, but with Dolores O’Riordan there is an outstanding number of people who will first-hand miss her.

When the news of her passing broke on the 15th of January 2018, I was inundated by messages from women whom I might have lost touch with years ago, but who were part of those girls Dolores inspired. All united by the inspiration she gave us just by dedicating her time and words to us, giving us, in such a delicate, crucial moment of our lives as the teenage years are, an importance that, coming from her, made us feel valued and made us aim to become the inspiration she was for us to others.

I last spoke to her back in 2010. Eleven years after that first meeting. When she saw me in the crowd at the Royal Albert Hall she called my name, which I can still hear in the album of that gig, and she pulled me aside at the end, asking me how I had been. That was the only time I got to thank her, to tell her that I was now living in London and pursuing a career she had put me on the path of. She lunged to hug me, she seemed so happy to hear that, she repeated a few times “I am so proud of you, you made it!” The last thing she did was holding my hands and looking at me in the eye saying “Are you enjoying every minute of it?” And I was, and being in front of her, telling her, thanking her, was for me going full circle.

As I slowly left the music industry years later, I can tell that part of the reasons why had certainly to do with the fact I was spoiled by her, her level of care, her dedication, her attention, as those were qualities I never saw again to that level in anyone within the industry. I feel I have no right to and still I feel like a tiny piece of me is broken now and this is possibly why, for Dolores O’Riordan, I felt the least I could do was retrace those steps and embrace again, for the time of an article, that side of music, including journalism, that I so vehemently wanted to be part of, thinking of those amazing people that I would’ve crossed path with. I believed that because of her because the only way she ever “used” her stardom was to celebrate and encourage the people looking up to her.

It is a devastating loss we are facing today in music, but it’s an even more profound one I find myself handling as a human being. As of now the causes of her passing are still unknown but whichever they might be, nothing will ever take away from the brilliant, compassionate human being that Dolores O’Riordan was and will be remembered as.

My heart goes out to her family and her beautiful children, and to all those people who, like me, felt something cracking inside today as the news jumped from share to retweet: Dolores O’Riordan, lead singer of The Cranberries, passed away at 46.

2 thoughts on “To The Faithful Departed: Dolores O’Riordan”