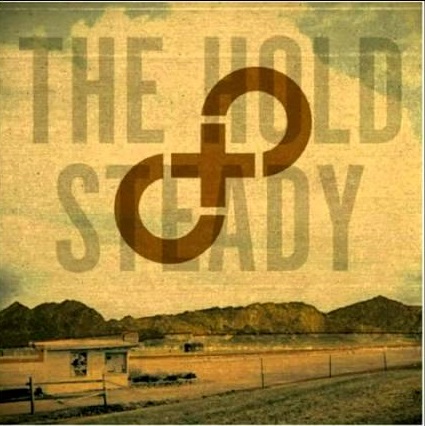 When you’re approaching your forties, as I was in the late noughties, and your two favourite albums of all time were released when you were in your teens (Doolittle and The Queen Is Dead), there is a tendency to become complacent in thinking that nothing now will ever top them. Granted, I was already very fond of The Hold Steady, having been a big fan of their 2006 record, Boys And Girls In America, as well as appreciating its two predecessors, but nothing had prepared me for Stay Positive…

My wife, as I recall, had sent me out to do some kind of menial task that should have taken around five minutes to complete, but I picked up the band’s fourth studio album on the way, to play in the car, and quite frankly I was so awestruck, from the opening throes of the first track onwards, that I had to pull over into the nearest layby and just listen intently all the way through. I was utterly entranced. Passers by may well have wondered why this strange man’s jaw was missing, and might even have been tempted to call for medical help, but that’s why I pulled over, you see – said mandible was pretty much flat on the floor. It would have been downright dangerous to drive…

Stay Positive is somehow already ten years old in 2018, and it has lost none of its impact, still thrilling and exciting me to the same level as it did in my youth. Well, ok, ‘youth’ may be stretching it somewhat, but given that the underlying concept (for wont of a better word) of the album is the ageing process, it seems rather appropriate to use it.

The record opens with the boozy, loving embrace of life by a group of friends who speak of raising ladders up and drinking on top of water towers, enjoying general high jinks, and the narrator (perhaps Craig Finn himself, or perhaps an unspecified character from The Hold Steady’s previous web of intrigue) nominating himself as spokesperson for the gathering, encouraging them to make something of themselves this year (“let this be my annual reminder that we can all be something bigger“). This is the remarkable, pulsating ‘Constructive Summer‘, and at this point, you would be forgiven for thinking this is going to be feelgood record of the decade. But then things go wrong in the close-knit neighbourhood of which Finn and co are providing us a secret window into. Not just ‘jam side down’ wrong, but drastically wrong.

As the former Uncut editor Allan Jones said in his review at the time, the deceptively cheery melody of ‘Sequestered In Memphis‘ belies “a song about a police interrogation – someone, we don’t know who, hauled in by the cops for questioning about something’s that’s happened, we’re not told what, the chorus his version of picking up a girl and the sex that followed, a harshly descriptive but inconclusive narrative that leaves us wondering what’s actually happened and where this might all be leading.”

And then it ALL kicks off. The gruesome discovery of two dead bodies and the psychic tendencies of the woman who predicted it (‘Both Crosses‘: “She’s known a couple boys that died, and two of them were crucified / And the last one had enlightened eyes, but the first guy he was Jesus Christ“), the paranoia and mayhem of this particular version of Suburbia upended (‘One For The Cutters‘: “Now the cops wanna question everyone present / They parade every townie in town through the station / But no one says nothing, and they can’t find the weapon / The girl takes the stand, and she swears she was with him“), the dependence on drugs in the seedy underbelly of the town by one main protagonist and another’s valiant but ultimately doomed efforts to save her from herself (‘Lord, I’m Discouraged‘), the promiscuous and not always satisfying sex of youth (‘Navy Sheets‘) and the emergence of several dubious, shady characters along the way (practically ALL of them!).

In some ways, it’s very easy to draw a comparison with the oft-cited Hüsker Dü when talking about this record and The Hold Steady in general, but the difference here is that, for all its gritty, bleak narrative, for all its shocking bloodshed, Stay Positive still manages to maintain a wicked sense of humour and is as easily quotable as something from, say, Withnail & I. Take for instance “They used to think it was so cute When she said “Dyer Maker” – all the boys knew it was a joke about Jamaica“, which refers of course to the Led Zeppelin track of that name (on a song, incidentally, that is littered with this kind of modern cultural reference, trainspotter fans!), or Sequestered’s brilliant chorus “In barlight, she looked alright / In daylight..she looked desperate / That’s alright, I was desperate too.”

All the hallmarks of classic Hold Steady are all over this record, some tracks with bright, terrace chant-like choruses, enhanced by Franz Nicolay‘s highly effective keyboard flourishes, and others with no discernible hookline at all (which doesn’t seem to matter one jot), and of course there are many ‘Easter eggs’ where Finn sends you scuttling back to earlier releases by the band to try to determine where you’ve heard a line before that he’s suddenly subtly dropped back into a new song.

It’s funny, I’ve been listening back to this album again now, whilst writing this ‘nostalgia piece’, and once again, the hairs on the back of my neck are standing up, it’s making me gasp and chuckle again, thrilling me – and indeed sometimes devastating me – as much as it did all those years ago, when I pulled over, dumbfounded, on that layby.

While it seems to be Boys And Girls In America that gets the most plaudits from both critics and fans these days, for me, Stay Positive might just be the greatest album ever released.