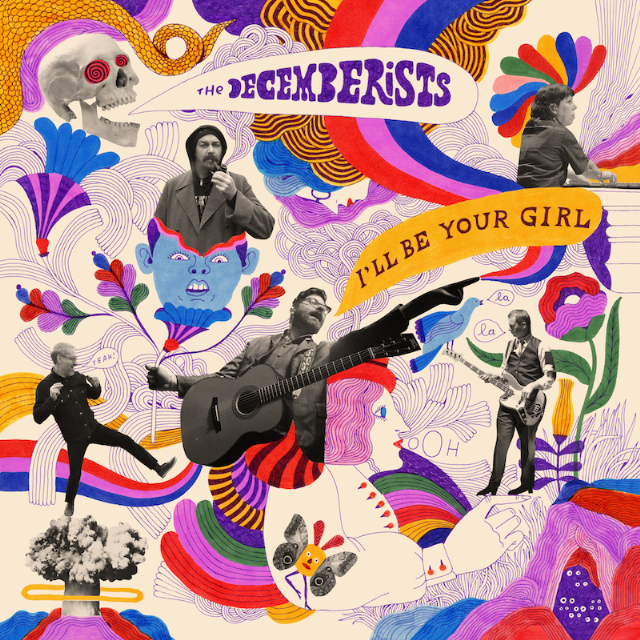 I was surprised, in a recent interview that Colin Meloy had given to Uncut magazine, to learn that he and his band, retrospectively, had been a little disappointed with their 2015 offering What A Terrible World, What A Beautiful World. They shouldn’t be. It’s an amazing album, for me not just their best but one of the finest of the entire decade by anyone.

Should I be worried then, that for I’ll Be Your Girl, they were going to shut the curtains on the brilliant light which made that record dazzle, intent on adopting a new, less friendly persona; one that you have to tread tentatively around until it stops spitting at you?

Instead, once again, we are confronted with another splendid set of songs, and if there IS one thing that The Decemberists have seemingly addressed and set about fixing, it is in the structuring of its track listing. Where its predecessor was merely a collection of great songs thrown together, arguably, this one is the most coherent release the band has unleashed yet.

Perhaps somewhat surprisingly, some of the album is quite proggy, yet almost glam at the same time, hence ‘Your Ghost‘ sounds like Muse‘s ‘Knights Of Cydonia‘ if it had been performed by Wizzard, and ‘We All Die Young‘ has that infectious Glitter Band stomp so synonymous with the early seventies at its silliest, yet recalls The Beatles too, specifically Lennon. It’s clear that, if anything, the remit for I’ll Be Your Girl was that it should be, above all, playful.

To that end, we have one of the most spectacular openers you will hear this year in the form of ‘Once In My Life‘. It’s a hugely uplifting song that evokes memories of The Triffids‘ ‘Holy Water‘ in its jubilance, while acknowledging Morrissey lyrically, namely the message of ‘Please Please Please Let Me Get What I Want‘, and incorporating eighties style synths in a similar manner to how John Grant did, on his 2013 landmark album Pale Green Ghosts.

Fans of the more meditative side of Meloy may want to head to the eight minute centrepiece ‘Rusalka, Rusalka_The Wild Rushes‘, which begins with a moody, mysterious aura not a million miles away from Dodgy‘s career high ‘Grassman‘, before developing into a folksier musical arrangement, Portland’s finest once again channelling young Steven Patrick with lines like “and I, being foolish, walked into my knees“, though this becomes “my chest” and “went into my chin” on subsequent verses.

As ever, with a new Decemberists long player, it is hard to pick a standout, as you will find yourself wanting to air this in its entirety every time, rather than just cherry picking, but if you’re drawn to the fountains of feelgood, then ‘Everything Is Awful‘ is for you, which begins like They Might Be Giants, but becomes a ‘we’re all in this together’ style anthem, whereas connoisseurs of classic bands of the sixties should immediately check out ‘Sucker’s Prayer‘, especially if you miss The Band. It’s an absolutely beautiful number and quite possibly the album’s zenith.

So, another winner then. I don’t think this one’s going to budge from my car stereo for quite some time, and just to further prove just how splendid it is, here’s the video to a track that I haven’t even mentioned…

I’ll Be Your Girl will be released on March 16th through Rough Trade.