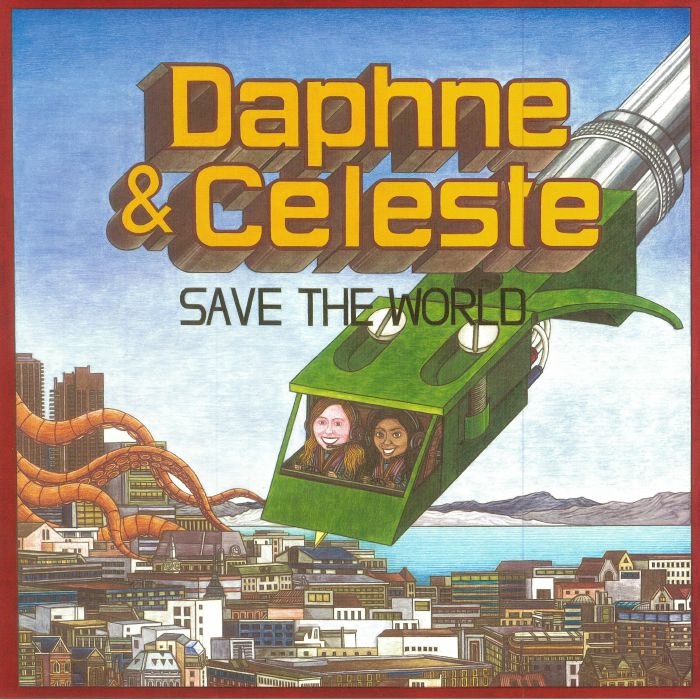 I always wanted to love Daphne & Celeste more. Anyone who can get a bunch of rock fans wound up and then perform heroically whilst being mass bottled on stage has to be worth rooting for. Disappointingly, the music didn’t deliver on their reputation (it also didn’t deserve the derision it received). Their music had attitude, but it lacked the  charm of people like Betty Boo and Shampoo –who achieved success with cartoon-character-styled pop.

After three hit singles and one flop album, Daphne & Celeste parted ways. In 2014, they were contacted by Max Tundra for a one-off single, ‘You & I Alone’-  a surprisingly understated comeback for a band whose existence was purely to provoke extreme reaction. Tundra toned down his usual chaotic melodies for a slower and moodier rhythm. It sounded more like Metronomy than either of their own work. Four years on, and Tundra has written and produced a whole album for Daphne & Celeste.

Tundra’s manic energy appears on the cute opener, ‘Save The World’. It’s just over a minute long and has the same childlike quality as Lawrence’s recent Go-Kart Mozart output. There’s also a Lawrence influence on the deliriously upbeat, ‘Sunny Day’. Tundra creates hyperactive melodies with string stabs and bright synths. These are in line with PC music and the sometimes brilliant, Kero Kero Bonito.

Whereas Daphne & Celeste previously had hits with playground chants and insults aimed at no one in particular, the targets are more specific on second single ‘BB’ (which stands for basic busker). It’s not hard to picture Ed Sheeran’s face as they sing, “each time I turn to that show, there’s a basic busker on the radio”. Tundra makes sure there’s a lot going on in every note — which works well because this song is lamenting basic buskers’  lack of imagination. They may have picked an easy target, but they hit their mark.

Max Tundra’s solo work was admirable but often overwhelming, and the same issues are evident on songs such as, ‘A.L.T.O’, ‘Golden Doldrum’ and ‘16 Stars’. They have nice moments in them, but are overstuffed with ideas. It doesn’t always stick. Daphne & Celeste briefly get lost in the music when their personalities should be centre stage. Their vocals are often heavily processed, too. This is rectified on simple piano ballad, ‘Song To A Succulent’ which has an early-70s folk vibe. It’s the album’s sweetest moment. It shows that they both have much stronger voices than you might expect.

On the strongest songs, Tundra strikes the right balance between giddy joy and his brand of retro-futurism. On the dizzying, ‘Paint Can’, Daphne & Celeste are a good match for the fast deep bass lines and 80s R&B style synths. Those 80s influences reappear on ‘Alarms’. It’s a complex arrangement without being too try hard. The repetitive layered backing vocals and addictive glistening keyboards are a perfect pop rush.

Just when you think Daphne & Celeste Save The World is going to end on a predictably colourful note, they close with one of the weirdest songs. Their ode to the overrated American candy, ‘Kandy Korn,’ starts as another bouncy pop song. It then changes tone with a weirdly ominous chorus, as they robotically repeat, “candy corn, yellow and orange, be reborn” before switching back into upbeat mode on the verse. It’s an eerie closer that gives the listener one last unexpected moment on this schizophrenic record.

Save The World isn’t the technicoloured masterpiece at which they were aiming. It is strong enough, though, to make me root for them more convincingly than I did the first time round. When it does work, it’s a collaboration that makes a lot of sense. It’s two divisive artists, coming together, not quite saving the world, but for 40 minutes making it a slightly brighter place.