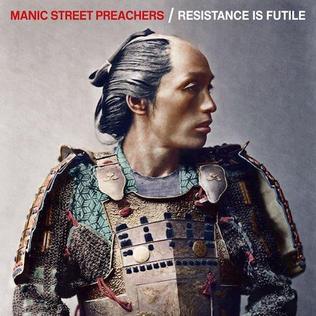 It could be said, that of about 2007, the main source of sonic inspiration for Manic Street Preachers albums has been their own canon. This hasn’t resulted in too many missteps, Send Away The Tigers revisited the snotty glam of their youth and produced one of their best ever singles in the process, Futurology is a band love letter to Europe bursting with ideas, and Rewind The Film is an elegant record, the sound of a band growing old gracefully, and Journal.. stands up as being one of the band’s strongest records. Only Postcards From A Young Man the bands ‘last shot at mass communication’ felt like they were running on empty.

Sadly, ‘Resistance..’ falls more into the Postcards camp; some of it feels like a fairly lethargic re-hash of This Is My Truth Tell Me Yours – opener ‘People Give In’ feels particularly phoned in – as string sections appear on cue as though written by algorithms; it’s reminiscent of their nadir Lifeblood.

That’s not to say that Resistance Is Futile is meritless and doesn’t have any genuine moments of magic. Recent single ‘Dylan and Caitlin’- a duet with The Anchoress – documents Dylan and Caitlin Thomas’ booze soaked relationship. It’s one of the most unabashedly ‘pop’ moments on the album- James Dean Bradfield has said that he wanted something like ‘Don’t Go Breaking My Heart’, which the call and response duet recalls emphatically. ‘Sequels of Forgotten Wars’, drawing on the record’s main themes of memory and loss, is absolutely saturated in melody and recalls the naïve urgency of Generation Terrorists. Singles ‘International Blue’ and ‘Distant Colours’ are punchy, emotive pop singles, the latter being a powerfully despondent meditation on the state of things, and showcase Bradfield’s voice at its best.

The record does have an overall ‘pick ‘n’ mix’ feel to it which at times is disorientating; and certainly in the latter half of the album when ideas of sonic consistency go out of the window. ‘In Eternity’, with its strident synth parts sounds like a rather gloomy reinterpretation of ‘The Winner Takes It All’- until the spell is broken by a guitar solo which feels entirely at odds with the tone of the song. We’re taken from that into ‘Broken Algorithms’, the most blatant Generation Terrorists pastiche on the record, on a record brimming with call-backs to their own catalogue. Wire takes lead vocals on the strangely touching ‘The Left Behind’ – a nostalgic, vulnerable moment that is the most intriguing and satisfying on the record.

Resistance… is not the sound of a band cannibalizing itself, but its lack of a defined identity is something of a misnomer in the band’s recent output. What it does have going for it is its relentless melodiousness, and it’s definitely a much more successful, urgent sounding stab at mass communication than Postcards From A Young Man. Undoubtedly, if this record was released in 1998 it would have produced a string of bona fide hit singles. It’s a welcome, if not essential addition to their catalogue.

Resistance Is Futile is released on 6th April through Columbia/Sony.