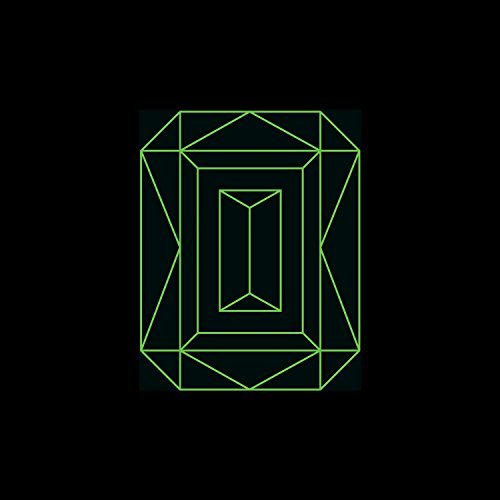 According to Crystal Vaults – a website that analyses the spiritual properties of jewellery – the emerald is known as the “Stone of Successful Love”. It’s a stone of infinite patience, it embodies unity, compassion and unconditional love.

The emerald is symbolic of the ever-present male protagonist on the impressive Vide Noir, the story of a lost romantic desperately searching for his lover in a dark black void (which in French is >Vide Noir) of night time. “I am only a nameless soul. Heading into a pure, black void“. Void is a clever triple meaning phrase to encompass death, emptiness and rock bottom sorrow.

Although the troubled soul is filled with regret over a past argument between the couple and becoming increasingly paranoid, like the aforementioned emerald he has infinite patience – he “will wait by the river in the light on the moon at the edge of the city” (‘Wait By The River’) and “will wait until the end, cause I don’t know where, I don’t know when. Baby, I’m gon’ see her again” (‘Never Ever’).

The incredibly engaging album follows the story of this man’s persevering hunt for his girlfriend and his failing grasp on reality due to all the weird spiritual occurrences that happen to him on his journey. Inspired by the nocturnal landscapes of Los Angeles (its neon lights, creepy shadows in its foothills, oceans and perhaps soul-searching), as well as cult practices, superstition, celestial and religious beliefs, it’s a delightfully typical Lord Huron record in sound and intelligent evocative lyrics that clearly paint the frustration of its main character with such depth and creativity.

Just like the previous two albums, again it’s a well-calculated musical balance of gritty addictive blues/garage indie rock hooks with fuzzy production that makes it sound nostalgic at times and moments of peaceful tempo from its lost-in-the-wilderness folk harmonies to refined slow dance. There’s also hints of Indian, middle-eastern instruments and dreamy harp to fit the record’s themes of mysticism and surrealism.

At beginning of the story (‘Lost In Time and Space’), the narrator wakes up to find his lover has suddenly disappeared. He assumes she’s selfishly taking his money to “chase her dreams” (something also referenced on ‘Ancient Names Part II’) and begins drowning his sorrows “lost in a galaxy of cocktail bars“, one of many references to the sky in the album. However he’s determined to get her back, and quits his job and drives his car “fast with no headlights” because he has an identity crisis without her.

On the subsequent ‘Never Ever’ the man shows his commitment to his lover by claiming he will never love anyone else and is stuck an endless cycle of denial, believing that one day she will suddenly appear back in his bed. From there on, he starts to lose touch from reality.

He seeks the help of a fortune teller called Lady Moonbeam for navigation on ‘Ancient Names Part I’ but as she predicts his imminent death, it makes things much worse for his sanity. ‘Secret of Life’ (“You chained my life to an ancient master. Will the curse be reversed if I say it backwards?“) and ‘The Balancer’s Eye’ (“Life is equal to dust in the balancer’s eye. Now I know that I can’t lift an old curse. Tell me, how does a man change the universe?“) are also tracks that interestingly comment on moments when people seek answers and guidance in mysterious otherworldly methods. While the repetition of “Follow the emerald star” on promotional material hints at brainwashing techniques.

There’s a feeling that this man is stuck in an never-ending limbo of guilt and regret on ‘When The Night Is Over’. “Will I find you when the night is over? Tell me where did you go? I’ve been searching high and low?“. However, the tale reaches an interesting climax on the spooky slow-rock song ‘Emerald Star’ when the protagonist does eventually find his precious girl but things are not as they seem.

Hearing a lovesick man go mad has never been so engaging but let’s remember this is Lord Huron, professionals at creating devastating characters with a tragic backstory and a fascinatingly detailed setting to match, doing what they do best.

Vide Noir is out now on Whispering Pines/Polydor.