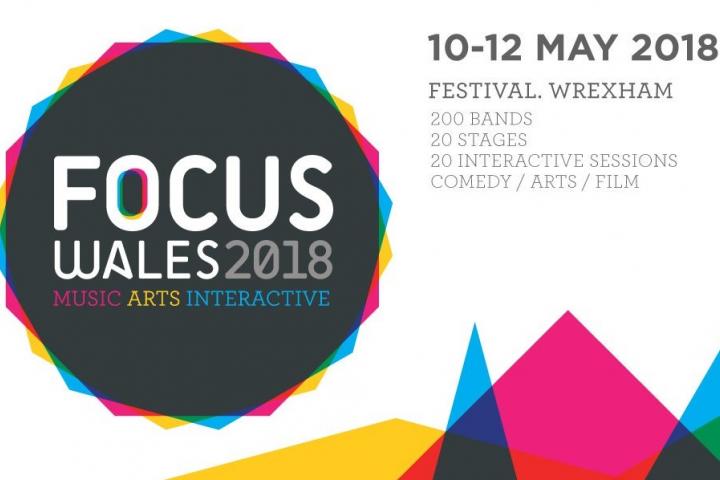 Ty Pawb has a custom-built venue space and a flexible area in the centre with a stage set up and some plastic curtains to separate it from the stalls and benches that make up the bulk of the building. There’s also a small acoustic stage by the seating area, and some serious sound bleed from the flexible area. The result is the most communal atmosphere the festival has ever cultivated, and that’s before the man making my coffee tells me to see Gallops later because the drummer also works there.

It’s testament to the success of Focus Wales in recent years that the PRS Foundation in partnership with the Arts Council of Wales and the Welsh government have chosen to use the  conference to  announce the Momentum Music Fund. Previously this had only been available to artists in England and, very recently, Scotland, but now artists can apply for a grant of up to £15,000.

As part of the festival’s Korean showcase, National Pigeon Unity ensure everyone present in Ty Pawb’s flexible space starts their festival off deaf as a post with their shoegaze-flavoured punk powered by absolutely blistering drumming. They’re followed by a stripped-back set from Adwaith next door. They move from indie pop ethereal folk, an unexpected Childish Gambino cover and even almost rapping and some awkward beatboxing to make up for the lack of drums in closer ‘Dunno’.

Ani Glass’s dense, choral, layered vocals and minimal electronics are perfectly matched to her grandiose surroundings of St Giles’ church. Her minimal techno in the church is a vivid contrast with Adwaith’s indie-pop in a brand new custom built venue in a weeks-old market hall, but there’s something really inspiring and powerful about two very different acts in vastly different venues united by singing songs about feminism in their native Welsh.

Chupa Cabras are a bit Weller (haircut), a bit Jagger (stare) but mostly just classic mod-ish pub rock/punk. Over at Central Station, the Tates are just as retro, for the 80s rather than the 70s, but without the fun. They pound away like an own-brand Duran Duran but no one looks like they’re having less fun than the band themselves. Their mood probably isn’t helped by an over-enthusiastic light show that keeps illuminating a disinterested dance floor and, weirdly, plunging the stage into darkness.

Fortunately Peaness are in the other room to get the floorboards flexing with ‘Oh George’. They play a new song two songs in, confident in their new material. Strangely, there’s a man stood right in front of the stage scrolling through his Instagram and not clapping but they valiantly refuse to allow him  to dampen their enthusiasm.

Gravves play a taut set of lean, razor-sharp punk to an unfortunately sparse crowd. Gengahr seem too polite to get the crowd going. Their mannered indie-rock is just interesting enough to keep people here, but not enough to keep their attention. It’s summed up by frontman Felix Bushe’s restrained manner of singing, and when he says he hopes were having a good time as “there’s a great lineup of bands here today, maybe there’s more on after us” it feels very insincere, especially in the mid-Atlantic accent he puts on.

As predicted Gallops blow the cobwebs away, blasting through an incendiary set, super tight, super fun and super danceable. It’s heavy on the more recent stuff and heavy in general, but in an intense sort of way as opposed to in a lumpen sense, especially with the flashing visuals of blocks of primary colours. What they’ve created is at the perfect midpoint between hardcore (as in happy) and hardcore (as in punk), but doesn’t fall into the traps that other bands who’ve attempted the same thing. It’s all about rhythm, the beat and the bass above all else, and it’s stunning. There’s couples passionately kissing, there’s a man stood on a table headbanging. There’s a moshpit, there’s a girl telling me how important and special I am. There’s a lot going on.

On Friday at Rock Suite, Eyre Llew do their epic, bowed guitar, enormous crescendos thing. It’s easier to admire rather than love, and with them playing a similar slot at the same venue as last year there’s a certain sense of deja vu. Around the corner at the former sports shop, now at gallery and venue Un Deg Un, Bone Cult are shirtless in glowing masks. As one of their blasts of electronic noise ends there’s a fire alarm still blaring, but it’s not coming from the band. There’s an uneasy silence in the room before a ripple of applause and then a man appears to tell us the building is being evacuated.

Atomic is an old-fashioned rock bar, complete with old band tshirts lining the back wall of the stage. It’s an appropriate room for Buzzards, who pack it out with their grunge with a classic rock bent. They wear their influences on their collective sleeve, but unfortunately they often stray closer to AC/DC than Springsteen. It’s a sharp contrast to Ennio the Little Brother across the road at Old No 7 whose barely there, gossamer light guitar atmospherics are almost drowned out by the small crowd chatting at the bar. Which is a shame as his gentle ambient drift is a welcome change of pace…until he starts rapping his family tree, that is.

Over at Ty Pawb Euros Childs has packed the venue to capacity, which seemed predictable for such a relatively small room. Still, Un Deg Un is running a little late following their earlier fire alarm so there’s time to catch local doom-mongers Mammoth Weed Wizard Bastard’s crushing noise rock. Their chunky riffs are heavier than lead, but singer Jessica Ball’s voice and trippy synth noodling rises above the noise to provide some much needed respite.

Haiku Salut begin to a half empty Atomic but it soon fills up as their folk-tinged electronica catches the ears of passers-by. Their set is mostly new material and it’s incredible. The three of them share the dozen or so instruments littering the stage with psychic fluidity. ’Bleak and Beautiful (All Things)’ gets a cheer of recognition for its opening flickers, but it’s the wealth of new material that’s really interesting. Their third album is really going to be something special. They’re followed by the hotly-tipped Boy Azooga over at Central Station. They’re a great way to end the day, simultaneously tight but loose, like Foals without the overthinking. Very good fun, like early Arctic Monkeys if they had enjoyed themselves a bit more.

Saturday begins with talks on how digital innovations are affecting the arts and the experiences of women in music. After a slower start music-wise, Mary Miller takes to the stage at Atomic, soothing heads with her wonky XX stylings, armed with just a guitar and sampler. She’s almost improving before our eyes: her last two songs are new and the strongest of the set by quite a distance, all throbbing sub bass and unexpected samples. As a full band, Adwaith are dubbier, more bass-led with more than a little Specials influence. They seem to still be finding their feet as a band but the songs are there; appropriately-named Hollie Singer seems very pleased and not a little bemused that ‘Fel i Fod’ has had 100k streams on Spotify.

Names at Rock Suite deal in melancholic piano ballads, so it probably doesn’t help that the TV screen behind them is showing footage of Elton John. There’s a live drumkit and a laptop backing track of backing vocals, bass and guitar, and you can’t help but feel it would be more effective if all of the instruments were live. They lose some stage presence by being a drummer and a pianist who’s wearing headphones and looking at a laptop unfortunately, especially when the backing track threatens to drown out what’s actually happening in front of us.

After a quick run over to Ty Pawb we can hear MOJA thrashing away but can’t get to them as the front doors we’ve been using all weekend are both locked. Another dash around the back means we’re in time to see them lay waste to Ty Pawb’s performance space like a Japanese Lightning Bolt. An onslaught of heavily distorted bass riffs and turbo charged drumming. The pummelling noise lets up only for a brief rendition of the riffs from ‘Smells like Teen Spirit’ and ‘Seven Nation Army’ before the bass is being swung round heads and pounded by the mic. Brilliant, and totally worth the rushing around.

The sets are stacking up as we get closer to the end of the festival, so there’s another quick trip back to Atomic. Musically, Canada’s Respectful Child is at the opposite end of the spectrum. They craft ambience with a violin and looper, scratching, tapping, plucking and scraping. They cut a lonely figure on stage but the quietly hypnotic music slowly builds to have the room spellbound. We can only catch half their set before heading to Central for Baby Brave. They have got louder since their last EP. ‘Alone in Tokyo’ has become a beast and the as-yet unreleased ‘Baby Behave’ sounds like early Franz Ferdinand only with a killer guitar solo. They’re received with such love by their home crowd but don’t take a second to soak it up, going from one song to another in quick succession. That new record can’t come soon enough.

The folk-tinged indie of This is the Kit is powerful enough to start the night winding down. ‘Bullet Proof’ is particularly affecting: the lighting at Central has been a little excitable at times but cuts to just a single yellow spotlight on singer Kate Stables. Speaking of excitable, there’s more than a little buzz about shows from Canshaker Pi and Hippies vs Ghosts echoing into the night, but it’s been a long few days. Wrexham may not be as big as Liverpool and Brighton, whose Sound City and Great Escape provide the bread to a Focus Wales sandwich, but it more than holds its own against these higher profile events. Actually, the town’s size is a huge bonus as it’s only a five minute walk from one stage to another, and the good it’s doing for this north Wales town is wonderful to see. Focus has quietly become one of the best festivals in the country, showcase or otherwise.