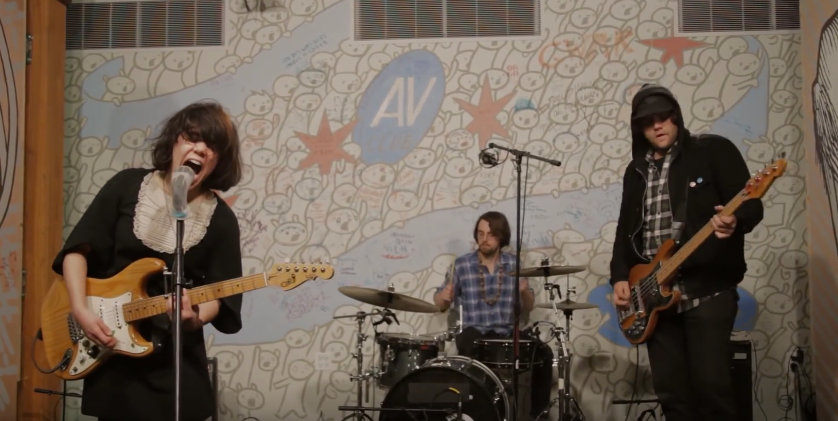 New Jersey’s Screaming Females have been slogging through the scene for some years now in various guises. From 2012’s Steve Albini-engineered Ugly to 2015’s Rose Mountain from Seattle based producer Matt Bayles (Mastodon, Pearl Jam), it’s not surprising latest effort, All At Once, which again find Bayles on production duties only ramps up this band’s storehouse of head-banging riffs.

‘Glass Houses’ ushers in Marissa Paternoster’s guttural vibrato, spit-strewn like the operatic bombast of greats like The Loaf (no joke). Buoyant banger, ‘Empty Head’ sees solid backbone, Jarrett Dougherty and “King” Mike Abbate bear down for a psych-style wig out. Cue the first face-melting solo of the evening and by no means, the last. You came for this shred fest, right?

Screaming Females write the kind of underdog indie greats that you find yourself swept away in, throwing your arm around your mate while your beer swills in the other hand. And there’s plenty of that  tonight. A bludgeoning bass line ushers in pop number ‘I’ll Make You Sorry’, as Paternoster admits: “I was love in before / I knew you / But I’ve given up” feelings of frustration tense in her fretwork. Sticking with the latest record, but with amps no longer set to 11, Paternoster’s fingers glide across the fretboard for ‘Bird In Space’ and its wind-in-hair wail, while ‘Wishing Well’ is up there with their ‘No Bye No Aloha’, all clean surf twang and sways from the crowd.

Chug city closer, ‘Criminal Image’ knocks us back into shape with its monster melody stabbing over Paternoster’s relentless riffage: “You’re a siren/ anything I want / everything I want“. Bearded rockers are shaking their heads. They can’t fathom. She is a siren but she ain’t a bantersmith. The trio are slick between songs, straight into the next jam but that’s fine.

We pay our monies to see Paternoster play because it really does give you everything you need, all at once.