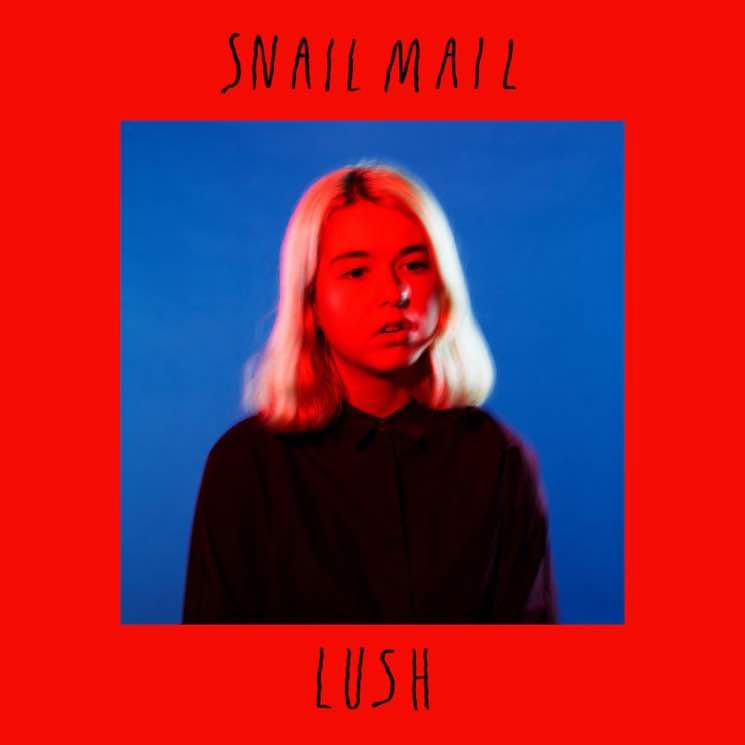 “Is there any better feeling than coming clean?” sings Snail Mail, aka 18 year old Maryland songwriter Lindsey Jordan longingly on sumptuous bittersweet first single “Pristine”. Its a moment of clarity set against an infectious song about the tumult of love, that typifies the confessional lyrics scattered across her debut album.

“I’ve never put more of myself into something than this record.” She says “I don’t feel comfortable finishing a song until I’ve ripped my heart out.” Thus her debut album for Matador Lush, is an album she spends wringing out the traumas of first love, coming out and growing pains, over one hot summer set to a slow burning guitar pop soundtrack, it possesses the potential to sleeper hit that could carve a place for itself in the way Japanese Breakfast‘s long player ‘Soft Sounds from Another Planet’ did last year. Growing up in Baltimore suburb Ellicot City, by the time she was sixteen, she had already released her debut EP, Habit in 2016, on local punk label Sister Polygon Records.

Recorded with producer Jake Aron and engineer Johnny Schenke, with contributions from touring bandmates drummer Ray Brown and bassist Alex Bass as well, Lush sounds intimate and expansive at once, whilst Jordan is not the finished article as a vocalist or songwriter this quality is part of the album’s strength; there’s a homespun feeling to Lush, eschewing terms like dream pop, Americana, folk pop or art rock, it possesses a singularity of voice, and a sparsity of instrumentation that makes each note simmer, a long player that you can get lost in like a long car journey spent telling each other about your lives and how things will change when you get home. Jordan’s lyrics are sharp and clever: possessing a maturity beyond her years shot through with her voice, at momemts a nascent melodic sigh and at others delivered with withering curl, it ripples with a undertow of what consumes a teenager’s life, the churning of longing, self doubt, disappointment and self discovery.

Spacious and evocative key song ‘Heat Wave’, is a crushing meditation on slowly crumbling first love, interjected by a surprising almost Wilco-style fizzing guitar solo. The proudly out Jordan’s first loves are at times given with therapeutic detail: “I broke it off, called out of my shift, and just cried in my bathtub and wrote this song,” Jordan recalls. “I was just so desperate to just get the way I was feeling out onto paper so that I could just have it and be done with it. It was almost kind of painful. It was like puking onto paper, and crying, ‘This girl hurt my feelings!’

The backdrop of her spindling guitar style (she was classically trained since the age of 5, uses her own tunings and incidentally was tutored by fellow Matador artist and guitar auteur Mary Timony of Helium) and shuffling percussion informs the subtle waves of ‘Speaking Terms’ and the wistful plaintive closer ‘Anytime’ amongst others. They possess echoes of early Unknown Mortal Orchestra or Radiohead’s laguid In Rainbows, this is most in evidence with chiming recent single ‘Let’s Find An Out’ which depicts a restrained side, guitar arpeggios shimmer like watching the dying of the sun on a summer evening; it’s garnished with evocative vocals that are shot through with an excavation of the memories of Jordan’s first wary steps on tour: “I’d gotten knocked around a lot by the process. I was scared. It’s sort of this love song about another person who is going through the same thing.” Part way through she sings “You’re always coming back a little older / but it looks alright on you,” she sings with a sophistication and self awareness that allows her to step outside of her situation, perhaps she’s come to terms with some of her fears at least.

With ‘Lush’, Jordan takes us on an endearing and formative coming of age journey from uncertainty and pain to growth and the realisation of just how strong she can be, and whilst it may pull back a touch by its final quarter. It’s a brave, gorgeous long player that possess a vividly drawn, brittle humanity and framed by a shifting musical pallette that suggests this is just the first chapter from Jordan: a bold emerging new voice. This summer Snail Mail’s songs will leave glistening silver trails across your heart.