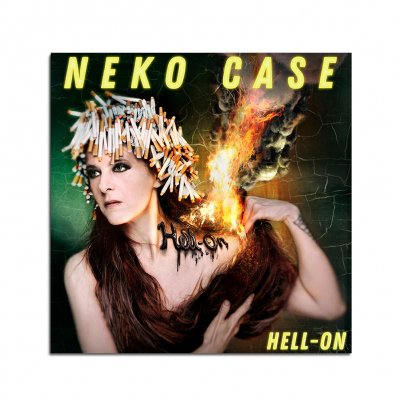 That Neko Case’s seventh album has arrived at all is a feat, considering the traumatic life events she dealt with while creating it. Her house burned down in Vermont, while she was oceans away recording in Sweden. Subsequently, when reporting on the incident, a journalist published her name and address – an act even more invasive and frightening because she’d just battled to rid a stalker from her life. Lyrics in catchy, poppy, ‘Bad Luck’ suggest the impact recent dark events had upon her life: “So I died and went to work / It’s not as bad as I thought it would be / But it’s still pretty bad luck.” That this album is vibrant, powerful and engaging is a testament to Case’s tenacity – as is the album cover’s black-humour laden image of Neko aflame with cigarette hair, and the juxtaposition of the song’s title alongside its affirmative, upbeat feel. I’m getting the impression a middle finger is being flipped.

This producer/singer/songwriter would be forgiven for shunning the world for a while. Yet the record pulls people in, it is a team affair, full of collaborations. It was self-produced with Björn Ytlling, and accompanying vocals include: K.D. Lang, Beth Ditto, Laura Veirs, Carl Newman and Kelly Hogan.

‘Curse of the I-5,’ is Neko’s collaboration with Mark Lanegan. It begins sweetly, yet as the track progresses, features some of the dark, ominous musical dialogue and reflection you might expect wherever Mark Lanegan appears. A contemplation of past selves and past love to understand the present and future, it looks at the process of getting older, wondering whether mystery is disappearing. “In the current of your life / I was an eyelash in the shipping lanes / And now I’m so scared about mystery / I fear I smell extinction.” For its inventive poeticism, “I was an eyelash in the shipping lanes,” may be my song lyric of the year – to be confirmed.

In brighter aural contrast, ‘Sleep All Summer,’ the cover featuring vocals by Eric Bachmann, is start to finish, wholehearted slow and soaring bewitching harmonies, pondering the cycle of the tides, seasons and relationships, the way nature and love both gives and takes away, over and over. Title track ‘Hell-On’ is spikier, stonier, laying out the cruelty of the environment. Menacing and ticking like a time bomb, its tone alludes to threat, while the lyrics spell out how unrelenting the wild world is, and how human beings – including stalkers and negligent journalists – are entwined in this. “You don’t have permission to take any pictures / Be careful of the natural world / Nature can’t amend its ways / Boils hell-on and then replays / Despite heartfelt springtimes of regret.” It’s a musical petition for compassion, and a warning that nature only shows mercy on those who deserve it. ‘My Uncle’s Navy‘ recalls Neko’s memories of an abusive relative who bullied her as a child, while Winnie charts her feminist awakening.

This is an album of disparate musical tones that together create an emotional journey. The tracks are unified by their defiance and their awareness of the uncontrollable nature of the universe and everything in it. Yet there’s a feeling that even though life on earth can be harsh and indifferent, we can persist, and look after one another. Final track, ‘Pitch or Honey,’ concludes: “The only thing that makes me smile is to remember / That I’m beloved of the wild / And may you ever return / To the warmth of your species.” Let’s be warm to all species – or you might experience hell-on earth, with Neko to answer to.

Hell-On is out now on Anti-.