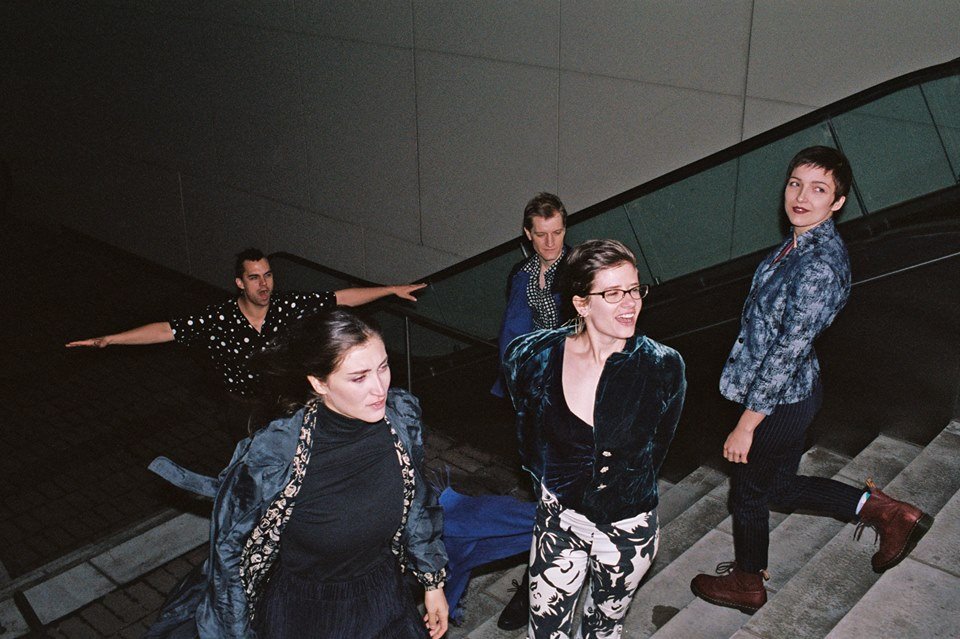 Playing their first London show since the release of their debut album Endless Scroll a few weeks ago, Bodega appeared at The Dome in North West London, to a crowd that still seemed to need some persuading. However, as the New York five-piece came onstage to set-up their instruments before actually getting into the gig they looked calm and looked unfazed by the challenge of winning over the large crowd.

With an album whose title and songs are aimed at highlighting the relationships that have developed between ourselves and the technology we interact with on a daily basis, it wasn’t a surprise that from the start of the set, and even before the band sang a note, we were played the robotically voiced messages heard on their album. Repeatedly we heard the messages “I touch myself while staring at your chat textbox” and “I use my computer for everything, heaven knows I’m miserable now.”

With old school computer mic wrapped around the microphone stand of lead singer Ben Hozie and on the cymbal of his fellow singer Nikki Belfiglio, whilst an iPhone was set up to record the entire gig from the back of the stage, it was clear that Bodega’s own relationship with technology was still a grey area that needed discussing.

As the band broke into their first song ‘Bookmark’, it was instantaneously loud and accompanied by the mesmerizing stage presence of singer Nikki Belfiglio, who with a single drum stick and her energy caught and kept our attention. As she confidently twirled the wooden baton round and round as though casting a spell on her audience, we had no choice but to let ourselves be put under the Bodega spell. And we didn’t regret it. Half-way through the gig it was refreshing to hear her poignantly point out that Bodega “were not our idols”, reinforcing the band’s underrated maturity and actual experience of lives lived.

The setlist as expected included tracks from their latest album, but we were also treated to new track ‘Knife on a Platter’. The band filled the room with their electronic punk rock as they played already popular songs, ‘Jack In Titanic‘ and ‘How Did This Happen?!’ Singer Nikki Belfiglio continued to stand out as she screamed and sang their song ‘Gyrate’, whose musicality and energy has echoes of Canadian musician Peaches. Guitarist Madison Velding-VanDam also stood out as he struck a robotic stance whilst shredding his guitar from stage left. As the band music became more animated he created his own relationship with the audience, targeting them with a tall stature and by putting his guitar in their faces.

As the gig continued the large room turned into a sweaty hot box, with the band giving us everything they had. For the final song ‘Truth Is Not Punishment’, Bodega played the song’s introductory chords repeatedly for well over 10 minutes, never dropping in speed or quality. When they finally got into the song, it was played for far longer than its original 2 minutes and 49 seconds. At this point you could feel that the audience was fully on board the Bodega experience. Had there been no curfew in place, the band probably could have go on playing forever.

Before the gig ended, lead singer Ben Hozie invited us all to come and chat to the band once they’d come off stage. Fans did as they were told and rushed to the merchandise stall at the end of the gig to await punk’s newest heroes, until the lights finally came on and everyone was asked to leave.

This gig was a true confirmation that Bodega are a band who not only know who they are but understand their own sound. This is a band who will continue spreading a message through their direct lyrics infused with their life experiences, regardless of what you think. So I suggest that you get on board now by looking up from your ‘phone and computer screens long enough to catch the brilliance of this very talented band.