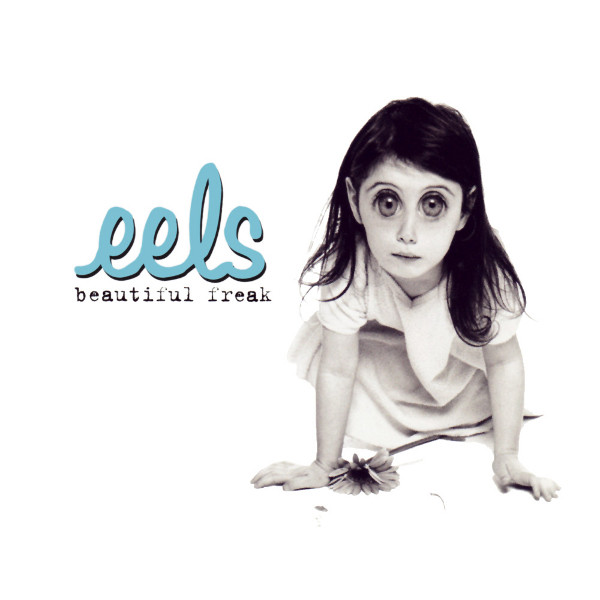 The first Eels album I ever heard (and the one I recommend that you start with, too) was Blinking Lights & Other Revelations, Mark Oliver Everett’s bittersweet magnum opus that was both an outstanding double album and a kind of musical autobiography. Over 33 tracks, it charted the ups and downs of Everett’s life, starting from his birth and ending with its sights set firmly on the future in ‘Things the Grandchildren Should Know.’ Released in 2005, Blinking Lights contained a few breakneck pop moments (such as euphoric lead single ‘Hey Man’) and a few noisy wig-outs (such as ‘Mother Matt’), but on the whole it was a downbeat, introspective listen that deftly demonstrated how life’s quiet moments could be even more powerful than its loud bits.

The second Eels album I heard was Beautiful Freak, originally released in 1996  and officially two decades old as of a few months ago. This album came as a huge surprise – Blinking Lights had offered up a pretty rich stew of different sounds, but not one of those 33 tracks indicated that Eels had once been a grunge band.
Okay, so that’s a little facile: Beautiful Freak plays with a whole bunch of different styles, including hip-hop, soul, rock ‘n’ roll, spoken word, and church music. But these components are painted on the canvas of grunge, with distorted, squalling guitars serving as a sonic analogy for Freak‘s central themes: ugliness, outsiderdom, anxiety, adversity, underachievement.
If that list of keywords makes Beautiful Freak sound like a pretty depressing album, don’t worry. Because while these 12 songs are marinated in misery and grunginess, that’s not the point of them so much as it is the darkness that enables you to see the album’s light. It’s a dim, flickering light, but it’s there just the same and it comes in the form of the record’s most childlike elements.
From the cover art inwards, Beautiful Freak presents childishness as a kind of ideal state, the thing we’re all trying to achieve even as the world continues to slap us silly and dudes get shot in the head all around. The album’s childishness is most obviously manifested in the toy piano heard on album opener and unlikely hit single ‘Novocaine for the Soul’..
…but it can be heard in lots of other places if you listen closely enough. There’s the cheering crowd of kids on ‘Susan’s House,’ the cute idea of a two-person “raincoat that has four sleeves” in ‘My Beloved Monster,’ the tinny ukelele in ‘Flower,’ the simple three-note piano melody that runs through ‘Spunky’ like a red thread. These out-of-character (‘freak’) moments of juvenile brightness are the true point of the album, and they poke through the angst and the grunginess like bright stars in a black night sky.
The album’s final track is ‘Manchild,’ and it resolves the whole cycle by finally calming the electric guitars to a single, serene-sounding arpeggio and allowing Mark Oliver Everett (or E, as he’s better known) to finally “feel like I am a child in love”. Don’t be fooled: there’s still darkness, even here, with a female voice despondently murmuring phrases like “I’m not happy” and “I’m not having any fun” on an answering machine message in the background. But as the strings take off and Everett sings one of the most pure love songs you’ll ever hear from any artist, let alone a misergyguts outfit like the Eels, you sense that this is it, this is the perfect moment that the whole album has been searching for. The clip of E rising into the air was used to promote ‘Novocaine for the Soul,’ but I think it’s actually a lot more befitting of ‘Manchild’: the whole song is him rising above the bad shit and trying to bring his lover – the depressed voice in that answering machine message, I guess – up with him.
Play this song at my funeral, maybe?