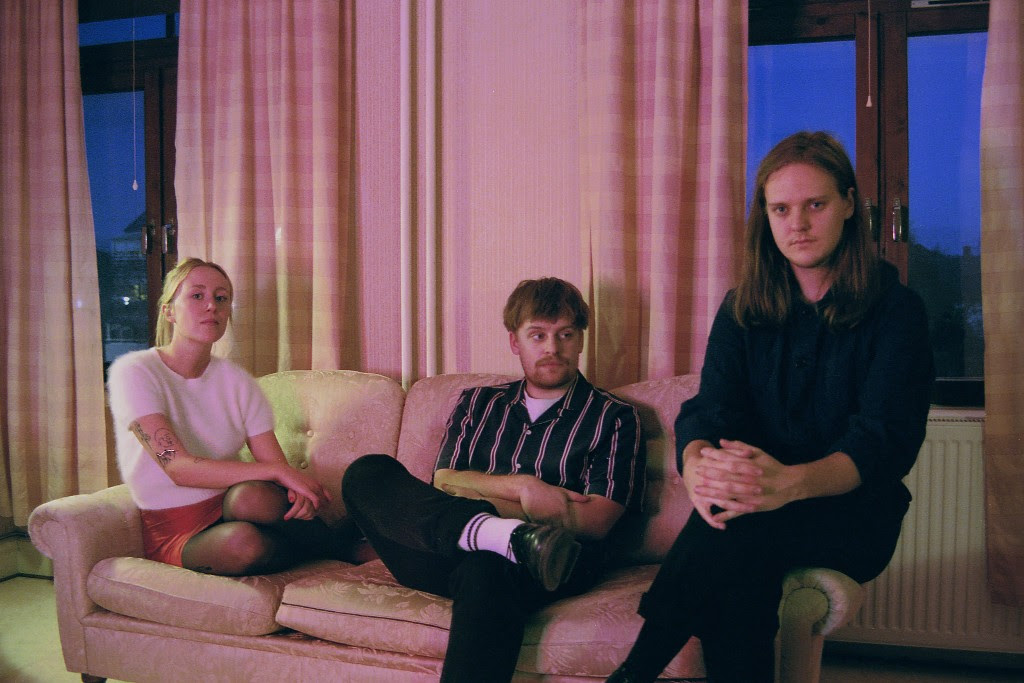 Echo Ladies return to the UK for a short run of dates next week – their first since the release of their debut album Pink Noise last month. ‘Bedroom‘ is a shot of pure brilliance from the Swedish group, its twitching beat and jagged riffs are infused with melodies riven with ‘heartbreak and confusion’, redolent of early Jesus and Mary Chain or the harder moments of the Primitives work, Echo Ladies is the fearsome sound of falling apart. (BC)

They play the following shows next week:

Speaking about ‘Crawl In Love’ – taken from Menace Beach’s forthcoming album Black Rainbow Sound (set for release on the 31st of August via Memphis Industries) – Ryan Needham says “It’s tough to justify chucking another song with ’love’ in the title on the pile, but ’Crawl in Love’ is truly the most unabashed, chock-full of joy song we’ve ever written and it came to us at a time when the endless horror of these times seemed to be really upping its game on a daily basis. I really needed to counter all the negative slime in my head in some way so I just went full cliché hippy and started writing list after list that explored and celebrated all ideas of love in the universe, a search for every last drop I could think of. Writing this one really gave me the mental rest I needed at that time.”

And it undoubtedly arrives in your ear, fully-fledged and with a mighty spring in its step as Menace Beach further explore the possibilities of a world that is inhabited by analogue synths and enveloping electronics. (SG)

Jawjaw – Worse Than It Seems

Jawjaw (Andrew Harvey-Gannon) makes an impression with his new track ‘Worse Than It Seems’ (featuring London-based artist, Tailor, on vocals). A playful subtle ripple of electronic music sewn with whispy soulful melodies and samples, it juxtaposes the lyrical themes of a crumbling of a relationship with smart production skills.

Andrew talks about the track: “‘Worse Than It Seems’ stemmed from my first writing session with Tailor. Writing sessions can be weird – you sit down with someone you might not have met before, who you may well not even like, and then you’re just meant to ‘create’. We had come up with something… it was fine, but it was a bit songwriting-by-numbers – it didn’t seem to come from anywhere real. So we called time, went for a drink, got to know each other better and agreed to be one hundred per cent emotionally honest. When we came back, the track wrote itself – about that moment when you first realise that a relationship isn’t just in a difficult patch: that lurch in your stomach when you know that actually, this could be the beginning of the end”.

While producing, mixing and remixing artists such as Giggs, Zebra Katz, Darq E Freaker and Mr Hudson, as well as scoring for feature film, London-based composer and visual artist, Andrew Harvey-Gannon, has evolved jawjaw as a collaborative music, film and art project. (BC)

Describing herself engagingly modestly as “A girl who likes music”, you get the impression the Germany-based Anna Kairos has just started (and she only signed with her label a week ago) though she sounds like a veteran of the business.

Putting aside the little French soliloquy, something about disorder emanating from anger I think, and a thunderstorm, the song opens with classical piano over haunting synths which returns fitfully to support a sumptuous Tori Amos-Fiona Apple-Hope Sandoval-like voice. Highly atmospheric, (and kudos to producer Guy Sternberg), it’s a five-minute track which like a good 45 minutes of a soccer match seems to pass in half that time and one that makes me think of the 14-year old Apple’s ‘Never is a Promise’. It’s that good. My only grumble is that it fades out suddenly; it deserves a better ending. (DB)

Ohmme are a Chicago duo who are releasing their debut Parts on August 24th on Joyful Noise Recordings. (home to Deerhoof, Sebadoh, WHY?, Oneida.) They make a splash (excuse the pun) with ‘Water‘ that’s ominous percussive stabs and entwined vocals are both experimental yet and accessible submerging you in their sonic textures and hauntings, they cite St Vincent and Dirty Projectors as influences this is a quality pop music underscored by a depth that marks them out as very promising.

Ohmme are Sima Cunningham and Macie Stewart, both classically trained musicians and established players within the Chicago music scene. They’re constant collaborators and have recorded and toured with homegrown acts as varied as Tweedy, Whitney, Chance The Rapper and Twin Peaks. (BC)

New Libertino records signings ilu split their time between Tallinn, Estonia and rural Wales, their impressively adventurous debut single ‘Graffiti Hen Ewrop’ released on August 3rd, is possessed of a propulsive, haunted motorik sound punctuated by squawking samples, stinging guitars redolent of Wire. It’s underpinned by the influence of the progressive krauty know of ’70s West Germany (Neu! Can, Faust) and laced with resplendent Welsh language refrains these are ‘hymns of heartbreak and poetic reflections on grief and loss.’

The lyrics came in one go, driving around a snowy Tallinn on Christmas day, throwing grief and sadness into the night that is falling around the city.

“I had just lost my father a few months before moving to Tallinn and I was dealing with my grief and my own confusion that was crippling at the time. The album was written and recorded there in a small flat in Merivälja looking across the harbour over at the old medieval town, it is very much a journey back into the light.” (BC)

Kate Teague was born and raised in the Gulf Coast city of Mobile, Alabama, she releases her debut full-length album will be released this Autumn on the Mississippi collective Muscle Beach Records. The first single, ‘Low Life’ is a shimmering, evocative slice of yearning framed in a celestial backdrop, Teague’s exquisite vocal tone enchants, then takes off into an astounding chorus: wrapping itself around your heart. You could compare her to Lana Del Rey or Caitlin Rose, but Teague’s has a voice all of her own. Absolutely gorgeous.