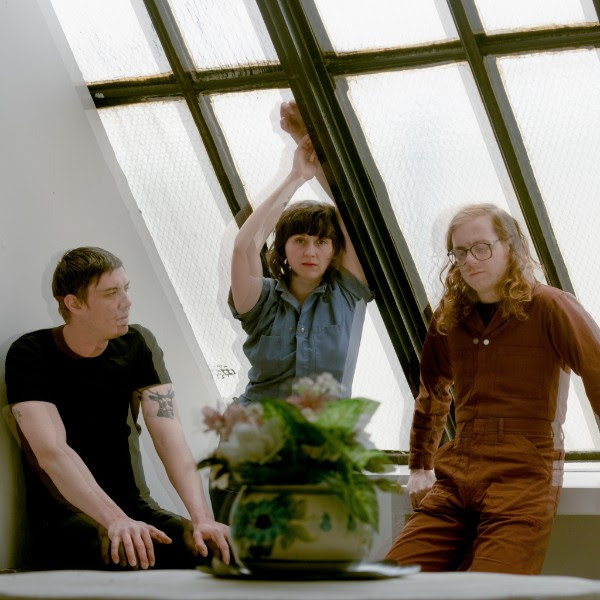 Swearin’ – Grow into a ghost

Swearin’ are back and have shared their awesome new single ‘Grow into a Ghost’, the from their forthcoming full-length Fall Into the Sun (their first since 2013), out October 5th worldwide on Merge Records. Elastic baselines, sinuous riffs punctured by boundless drum beats meanwhile Allison Crutchfield’s vocals drip with the kind of fuck you cool that brings to mind both Sonic Youth in its talky personification of self-discovery but also Belly in its infectious melodicism. Ace!

Fall into the Sun is a record that doesn’t try to obscure the passage of time but instead embraces it. “Getting older, your tastes change, and what you want to do changes,” said drummer Jeff Bolt. Those changes, though subtle, are impactful, making Fall into the Sun what Crutchfield calls “the adult Swearin’ album.”

INTERNATIONAL TEACHERS OF POP – Age Of The Train

The first fruits of this new project, their debut single ‘The Age Of The Train’ will be released on 12th July 2018 on Desolate Spools / Republic Of Music. A super slice of electronic pop that’s shuddering synth stabs, squelchy beats and clever vocals brings to mind the work of early Human League and the knowing dexterity of Black Box Recorder. Underscored by a wistfulness for travel and the history a of the rail network, it’s a tribute to the joy of travelling by train.

Leonore Wheatley of the group said this about the single: “Having been a perpetual passenger, spending hours and money on our beloved rail service. Now is the time to recognise and renationalise. Try and dissolve some of the stresses of not managing to escape your city for even just a day without feeling some kind of dread.” (BC)

Chemtrails – Ghosts Of My Dead Cats

‘Ghosts of My Dead Cats’, was the third single from the debut album from London’s Chemtrails, the project of romantic and musical partners  Mia Lust and Laura Orlova. Their debut LP Calf of the Sacred Cow released earlier this year via PNKSLM Recordings. Twinkling with a woozy and wonky charm ‘Ghosts Of My Dead Cats’ is an infectious haunting from Chemtrails as they stir a heady brew, swirling keyboards, and hook filled atmospherics gather as Lust and Orlova join hands and jump down a wormhole, catchy and slightly unsettling Chemtrails are intoxicating. (BC)

American singer/songwriter and producer Andrew Bayer has teamed up with Norway’s Stockholm-domiciled Ane Brun on the second single from his forthcoming third studio album, ‘In My Last Life’ which is scheduled for release on August 24th (Anjunabeats). Brun herself is between albums, her last one, the very personal lovey-dovey covers album Leave me Breathless having been released in October 2017.

Brun has worked with Bayer before and she will turn up on three of the tracks on this album. He was producing at 15, moving from pop to electronic along the way and has twice been Grammy-nominated.

I saw Ane Brun a couple of years ago when many of the songs she performed were from Leave me Breathless and to be honest, I couldn’t imagine her doing anything like this. But ‘Your Eyes’ works, mainly because her vocals are on top form. The tune isn’t bad either, and it builds to a satisfying trancey climax. But it’s almost ruined by a sort of semi-military beat of the sort the Albanian army might march to after they’ve read EDM Beats for Beginners. (DB).

Cardiff artist NonameDisciple releases her new double single, ‘Millennial’ /’Godfidence’. Her genre blurring sound runs the gamut from old school hip hop to RnB and taps into existential themes that question what it is to be human in 2018. In ‘Millennial’ produced by rising producer Syndrome, Noname believes her generation are brainwashed and too focused on material things. ”We’re not actually spending quality time communicating, everything’s very superficial,” says the 23 year old MC. “This track’s about how there’s a depth to life, a rawness and realness that we’re not capturing. We’re too consumed by distractions.”

The second track, ‘Godfidence’ is produced by newcomer J.Cardenas and is about what Noname calls Godfidence. “Confidence is having confidence within yourself, in your ability, your talents, skills, mindset and you as a person, which is great. But Godfidence is looking through spiritual eyes.”

The two singles are fused together in one abstract and creative short film entitled “A Millenial’s Godfidence” which is directed and edited by Onismo “Nizmo” Muhlanga   and mark Nonamedisciple out as an exciting talent. (BC)

Ahead of the release of Helena Hauff‘s new album Qualm on 3 August via Ninja Tune today she releases two new tracks: ‘Hyper-Intelligent Genetically Enriched Cyborg’ – a glitching pulsing framework of synthase it plugs into the motherboard and lights up, illuminating, adventurous and progressive, it’s quite simply fantastic. Qualm derives its title from the German word (kvalm) which translates as fumes or smoke, whilst the English meaning refers to an uneasy feeling of doubt, worry, or fear. (BC)

Adwaith released their new single on Libertino Records a few weeks back, the evocative ‘Gartref’ distills an atmosphere with chiming guitars and clipped percussion, is woven with Hollie’s haunting vocals it captures the yearning of homesickness and going away and returning, it’s the kind of superlative songwriting shifts we’ve come to expect from one of Wales’s most exciting emerging and constantly evolving groups.

‘Gartref’ comes from the band’s debut album which will be released in October this year. Libertino Records said ‘Gartref’ is a fully formed collaborative adventure for Hollie, Gwenllian and Heledd. The song was mostly written as recording took place, showcases their growing confidence that will be fully revealed on the much-anticipated debut album due for release later this year.   (BC)