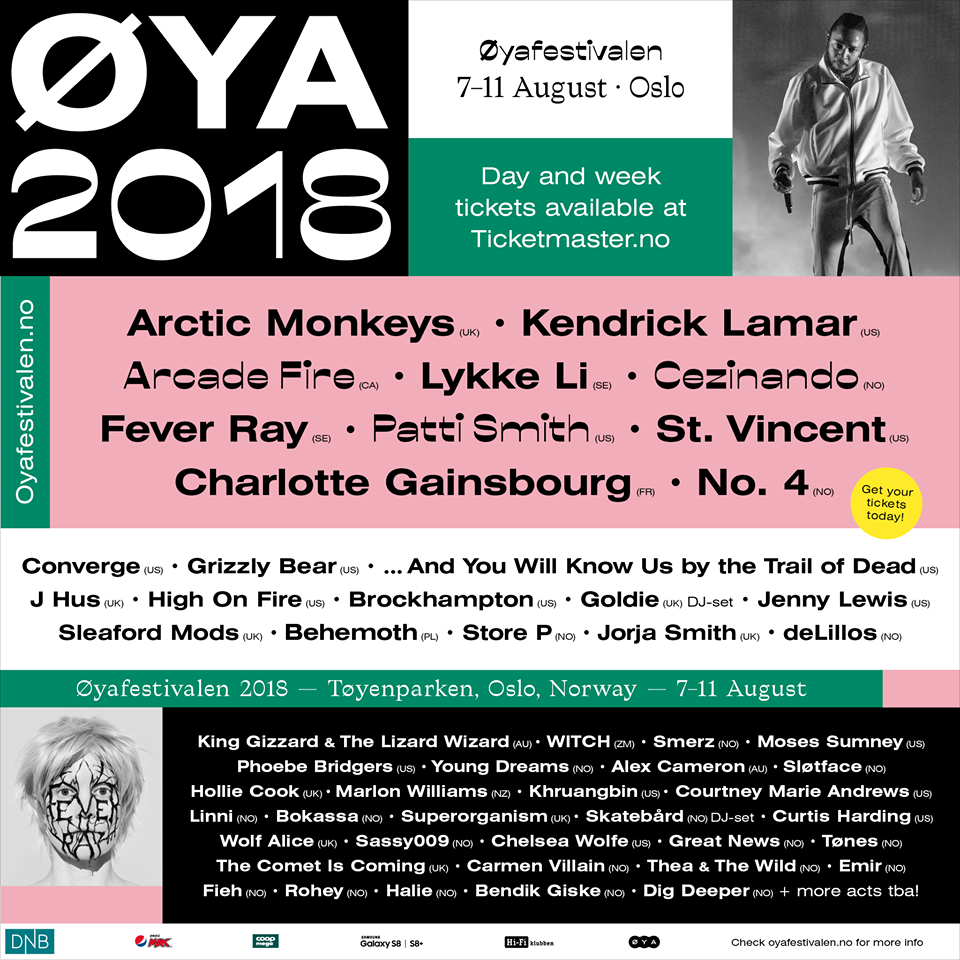 One of Scandinavia’s major music festivals gets under away again on 7th August until 11th August. The Øya Festival takes place in and around the Tøyenparken, close to Oslo’s city centre and preceding it for three days (3rd – 5th) is ØyaKino, a film festival.

Øya has grown dramatically since its modest debut in 1999 in a different location, when it attracted an audience of just 1,200 and all the artists were Norwegian. In 2018 the daily capacity has risen to 60,000 with around 100,000 visitors in all expected and a global cast of musicians.

Øya aims to be one of the world’s greenest festivals, finding new and more environmentally friendly solutions each year to handling such crowds in respect of such mundane but important issues as waste disposal, food, transport and power supply, leafleting and toilet paper. It achieves a material recycling rate of 74% and in 2018 one of the stages will for the first time run on solar energy. Free parking for bicycles is provided and even free repairs to them. Visitors can ‘cash-in’ the value of items they collect and present for recycling.

The first day kicks off with 130 lesser-known and up-and-coming artists performing across 28 venues in the city. On the Wednesday (8th) the action switches to the Toyen Park proper and its stages Amfiet, Sirkus, Hagen, Vindfruen, Hi-Fi Klubben and Biblioteket while performances continue at the smaller off-park venues throughout the main event.

Headliners on that day (Amfiet) are the eloquent American lyricist Jenny Lewis, who is in the throes of finalising her new solo album; Arcade Fire, who probably for the first time in their collective career have something to prove following a series of poor reviews and some adverse fan reaction to ‘Everything Now’; and The Arctic Monkeys, hot on the heels of their sixth album ‘Tranquility Base Hotel & Casino’ which also prompted a mixed response. Meanwhile Goldie hosts a headline DJ set over at Hi-Fi Klubben.

Kendrick Lamar headlines the Amfiet stage’s final performance on Thursday 9th; the Compton rapper having been winning rave reviews in the last couple of days for his acting performances alongside 50 Cent in the latter’s TV drama Power, in which Lamar plays a homeless drug addict.

Amfiet also bestows headline status on Norwegian wild child Thea and the Wild on Thursday, along with London alt-rock band Wolf Alice and another rapper, Atlanta’s 6lack. Sweden’s Fever Ray takes to the Sirkus stage, just after the abrasive Sleaford Mods have strutted their stuff around Vindfruen.

On the final day the main action for some will move away from Amfiet as other stages host the likes of popular Norwegian pop-punkers Sløtface, Arizonan Country & Western starlet Courtney Marie Andrews, Swedish icon Neneh Cherry and America’s “punk poet laureate” Patti Smith. On their song ‘Magazine’ Sløtface sing “Patti Smith would never put up with this shit”. It will be interesting to see how she responds and she probably will!

Øya is an eclectic mix of musical styles from around the world, from newcomers to established artists, packaged into an easy-to-navigate downtown location. At the time of writing it is understood that tickets are still available, see https://oyafestivalen.no/en/info/tickets/.