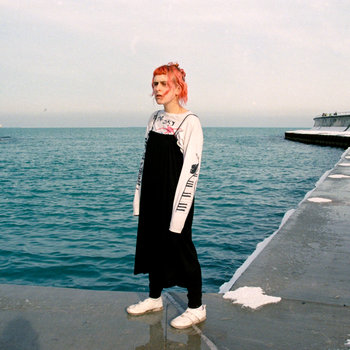 Lillie West aka Lala Lala releases her new album The Lamb on September 28th, 2018. The visceral lead single ‘Destroyer’ is a discordant drawl through trying to claw your way out of a rut of nihilism and despair, she says the song “is about retroactively realizing your feelings and trying to figure out what happened to get you where you are. Feeling out of control and like you’re stuck in a feedback loop.”  lurching into a chorus that shakes with an existential cry: like the fuzz-pop of early Angel Olsen fed through the fractured early ’90s lo-fi of Sparklehorse, it’s a fantastic anthem for the lost.  Directed by West and Brielle Brilliant, the video finds her protecting herself in an ongoing fight against destroyers. (BC)

Sextile return to our shores next month, the band have announced a new EP titled 3, which is set for the release at the start of the tour on September 14th via Felte. Sextile are a two-piece comprised of Brady Keehn and Melissa Scaduto now favouring synths over guitars, they haven’t thrown out the strings completely.

The abrasive lead track ‘Spun’ is a visceral thrill, convulsing synths, LinnDrum’s stomp in unison, while Brady Keehn’s vocals are barked out at the centre of a chaotic political maelstrom, like Suicide in a death march with early Birthday Party, it could be the ominous soundtrack to Donald Trump’s week of corrupt revelations. (BC)

Just over a month ago Bill Ryder-Jones played Deer Shed Festival in what God Is In The TV described as “the individual performance of the entire weekend.” There, in typically unheralded fashion, the West Kirby tunesmith introduced the world to a new song, ‘Mither’. Little did we know then that ‘Mither’ would also be the first track he would share publicly from his forthcoming album, Yawn (scheduled for release on the 2nd of November on Domino)

It is fast approaching three long years since Bill Ryder-Jones brought us the wonder of West Kirby County Primary but ‘Mither’ shows that in the interim he lost absolutely none of his unerring ability to pen the most melodic and melancholic of popular songs. I would seriously doubt that there is any songwriter around today who can better distil the feelings of sadness and joy into just over six minutes of such breathtaking beauty. Quite simply gorgeous. (SG)

Ghum are back with their new Double A-Side single for ‘I’m The Storm’ and ‘Undone’. ‘I’m The Storm’ is the pick of the two tracks from this London-based collective of distinct female musicians from around the globe. It channels the majestic post-punk sounds baselines and twitching drums of early The Cure and laces them with hauntings that swirl their way up the stairs and possess your body. With a more muscular sound and references to early Siouxie and the Banshees, it sounds like a statement of intent from Ghum who are clearly evolving into quite a prospect.

Oscar Jerome – Do You Really

Bright and bold earworm ‘Do You Really’ finds South London’s Oscar Jerome at his most ‘woke’ as he tiptoes through subjects like toxic masculinity and sexuality with a palette of soulful sounds. The delicious guitars, bubbling percussion and scatting soulful vocals of Oscar who positions himself somewhere between the ease of Omar and the pop flourish of Terrence Trent D’Arby. In the video, Oscar and bandmates washed in psychedelic visuals, courtesy of visual artist, Tilly Mint. Speaking about the clip, Jerome says: “Everyone featured in the video either plays in the band or helped produce the song. We wanted to have fun and be playful with the video and so the concept was based around us existing in alternate funky reality where people bathe in records and wear sunglasses inside.” (BC)

A regular in Nordic Music Scene, Swedish solo pop artist Summer Heart (David Alexander) has joined with Canadian contemporary-pop singer K¥LO for the seventh of his #12SongsOfSummer project, releasing one song per month through 2018, and with a dual vocalist for the first time.  Of course, summer doesn’t last for 12 months but Summer Heart’s songs reflect his sound, no matter what the season.

There’s always a groove to Alexander’s work but on this occasion, there’s perhaps just a little too much going on. It builds up layer on layer until it becomes an amorphous mass towards the end rather than subsiding. (DB).

Julia Meijer is a Swedish born singer, songwriter and guitarist who is based in Oxford, UK. Following her previous double A-side single, ‘Ocean’/’England’ (December 2015), Julia has just released her new single, ‘Fall Into Place’.

Tiptoeing through glacial pop and ’70s flecked folk-pop redolent of Feist, fall into place is a sifting through the detritus of life’s anxieties and the realisation that they don’t really matter, to an elegantly bittersweet vocal that’s part spoken mantra part harmonic shuffle. ‘Fall Into Place’ is infused with an aspirational sense of personal responsibility for one’s own life. Julia explains “the song is about how easy it is to fall into a pattern where you prioritise the wrong things and get stressed out over things that don’t really matter, and how angry you feel when you realise how wrong you’ve been. I wanted the words ‘let everything fall into place’ to be like a mantra to repeat every morning to get your priorities right and focus on the things that really matter”. (BC)