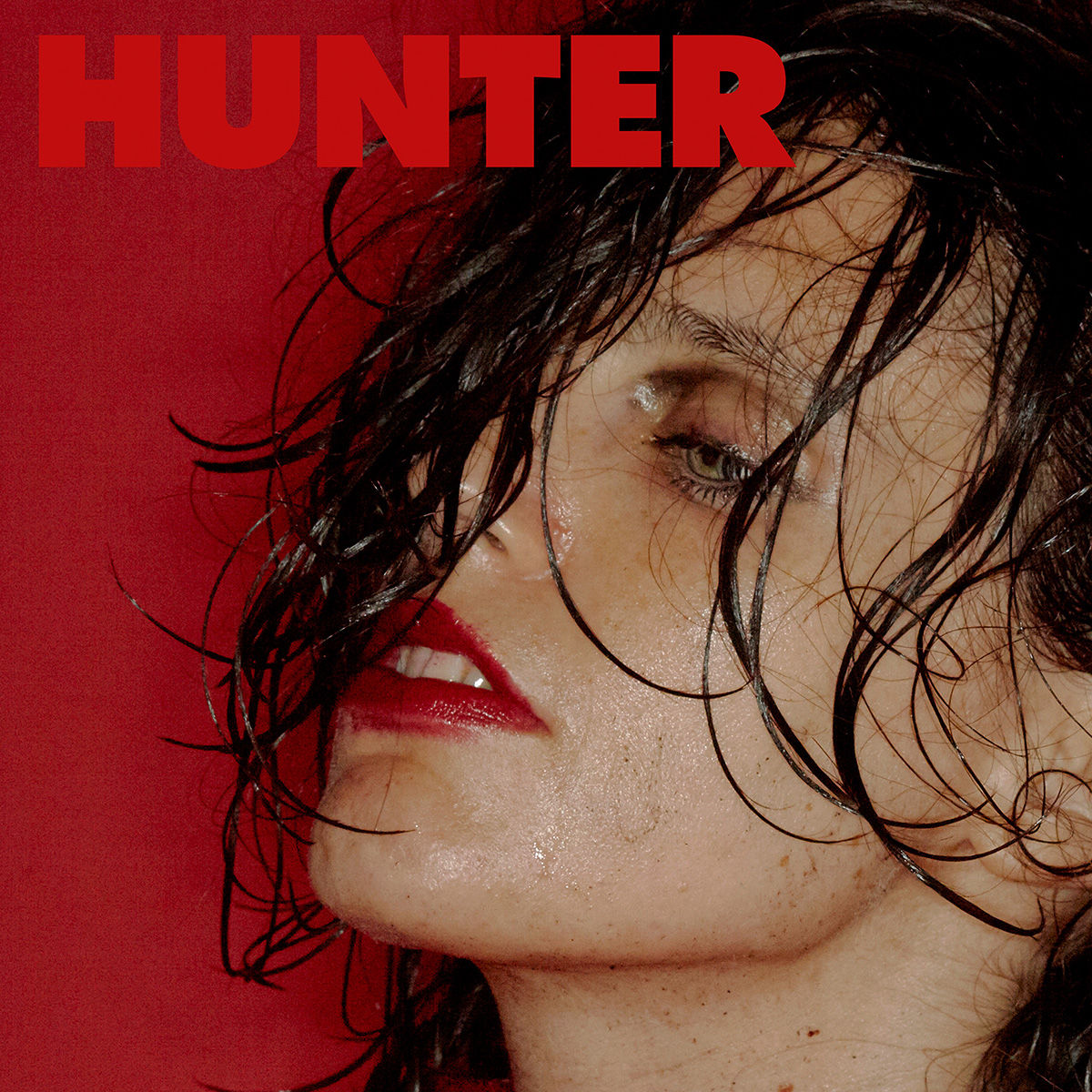 When Anna Calvi checked out of her Cheap Hotel and embarked on her solo career courtesy of a riveting performance on Later with Jools Holland in April 2011, she set new standards for virtuoso musicality and total focus (110% as the soccer pundits would say). I’ve actually seen her go into a trance in preparation for her legendary guitar solo in ‘Love Won’t Be Leaving’, something she may have learned from her parents, who are hypnotherapists.

More than that though, she displayed a level of raw sexuality in her performance not seen since the likes of Tina Turner or Courtney Love in their prime.

The red and black of the flamenco dominated the stage shows of a set of androgynous songs on her eponymous debut album. In the second one, ‘One Breath’, released in 2013, the focus was more on a restrained but animal-like sexuality, which could suddenly erupt, as it did for example on the tracks ‘Cry’, and ‘Love Of My Life’, complete with husky voice and shallow breathing.

And it’s all here again, on ‘Hunter’.

What was previously missing from Calvi’s repertoire however, was melody. To be more precise, hooks. Few of her songs, with a handful of exceptions – and ‘Love Won’t Be Leaving’ is one of them, along with ‘Blackout’, again from the first album – were built on anything more than a half-formed tune. That made them difficult to memorise and recall. I’m convinced that is why an unusually gifted artist like her, nominated for The Brits, and the Mercury Prize (twice, and on both occasions she really should have won) has so far failed to achieve mainstream recognition.

During the extraordinarily long gap between ‘One Breath’ and ‘Hunter’ (five years, although her ‘Strange Weather’ EP with David Byrne did intervene along the way), and during which she decamped to Strasbourg to live with a girl friend and officially came out, one song – apparently called ‘Dreams’ – appeared on You Tube from a live performance at Brighton in 2015 that suggested that the significance of a strong tune had dawned on her.

That song didn’t make the cut on to the new album, though snatches of it can be sensed on various tracks and many of those tracks on ‘Hunter’ do have a memorable tune and arguably deserve recognition as stand-alone singles.

Calvi rarely gives insights into the meaning behind her creations. Her perspective has always been that they should be interpreted by the listeners in their own way. She has let it be known however that this is fundamentally both a queer and feminist record, one in which she explores the breaking of gender conformity and promotes the concept of the female protagonist, the one that isn’t merely responding to the Alpha Male threat.

The dramatic ‘Don’t Beat The Girl Out Of My Boy’, for example concerns the need to avoid the crushing of female emotions in the male (and vice versa), such as shedding a tear at a soppy movie, or the desire to learn ballet pointe work and entrechat rather than how to head a football or play keepy-uppy. It also teaches us that Anna Calvi can SCREEAAMM (can she replicate it live? We’ll see). There’s a neat little two-chord guitar hook and she inserts one of those little finger runs like she did on ‘Eliza’ on the last album while the castrated percussion at the end is effective.

‘Hunter’ meanwhile starts with a pounding heartbeat and the sort of heavy breathing which suggests an orgasm is fast approaching – you really can’t get much more suggestive than this, only Jane Birkin on ‘Je t’aime, Moi Non Plus’ and Rilo Kiley’s Jenny Lewis on ‘Portions for Foxes’ come anywhere near it. And, as the breathing reoccurs several times, those orgasms are clearly multiple. There’s no question who’s on top, or who’s wearing the pants.

The lyrics suggest a sex game played out as faux prostitution but I could be barking up the wrong tree entirely.

Indeed, ‘Hunter’, with its haunting keys, Calvi’s intrusive industrial guitar and the Spector-like deep all-round sound, courtesy of faithful assistant Mally Harpaz, Alex Thomas, one of several drummers she’s used since Daniel Maiden-Wood went AWOL just before her last major tour, and new recruits Adrian Utley from Portishead on keys and Martyn Casey from The Bad Seeds on bass is possibly the most accomplished and satisfying track she’s ever laid down. The melody alone would be appropriate to any amount of TV dramas and even a (female) friend who is an avowed Calvi-hater (“she’s up her own arse”) grudgingly acknowledged its quality.

While both these tracks are in the main departures from previous material others are throwbacks to earlier albums. The trans-sexually  suggestive ‘As a Man’, the opener, could really be a remnant of the first, eponymous album and its ‘I’ll Be Your Man’,  with a Maiden-Wood style beat, though the Telecaster isn’t as strident and there’s more bass (Calvi tended to avoid bass on early work, preferring to channel bass sounds through her guitar, together with Harpaz’s pedals). Oh, and there’s the stamp of Bowie all over it; to such a degree that you wonder when it was written. January 2016 I’d venture to suggest.

‘Indies Or Paradise’ moves the tempo up and into anthem territory and with its obscure experimental industrial guitar solo that Torres might have written it is more out of the ‘One Breath’ mould. Coupled to a strong hook anchored on the repeated lines “I want us in the air in Paradise,” and “I get lost in the air in Paradise” (or is that ‘lust’?) and booming bass tom-toms, it is another highly sexually charged track.

Incidentally this track, when played live – but sadly not on the album – has featured a bell, courtesy of Mally Harpaz. In my view the bell is the most effective percussion instrument if used succinctly. It isn’t often used at all. I vaguely remember ELP’s Carl Palmer pulling at one with his teeth during one of his 20-minute drum solos. St Vincent (with whom Calvi used to swop crappy guitar solos) used one at the end of ‘Severed Crossed Fingers’ to great effect but not live (on the few occasions she’s even played it live). In stage ‘Indies or Paradise’ performances Harpaz hits one just three times but the outcome is sublime, it gives me an Autonomous Sensory Meridian Response (aka a head orgasm).

I’m guarded about any song called ‘Swimming Pool’ because several contemporary artists have produced songs with that title in recent years, including Emmy the Great, Lana Del Ray (‘pools’ in the plural), and Kendrick Lamar’s ‘Swimming Pools (Drank)’, while Lykke Li is, right now, in the ‘Deep End’. It is too easy to draw comparisons.  Calvi’s effort reintroduces the lush, swirling guitar and vocals that pervade first album tracks such as ‘Rider to the Sea’, ‘No More Words’ and especially ‘First We Kiss’. It soars wonderfully in the middle and is less chaotic and more structured than that earlier work. It is soothing in the way that Emmy’s effort is – you could easily drown in it – but what it has to do with queerdom and feminism is beyond me.

There’s no such difficulty with ‘Alpha’ in which Calvi relishes her new Alpha Female role, dividing and conquering, which presumably means her winning the girls from the boys. She even spells it out lest we don’t get the message. “I’m an A-a-alpha”. I’ll bet. To be honest the song, which is the least impressive so far, is going nowhere until another industrial guitar solo towards the end but before that a little bridge made out of her voice, booming drums that again might have come off the first album, and a delicate little glockenspiel contribution from Mally Harpaz is the highlight.

‘Chain’ is unusual for Calvi in that it starts with a short a cappella contribution then suddenly leaps into full climactic rock mode with the repeated line “I’ll be the boy you be the girl”; I’ll be the girl you be the boy” along with the entreaty to “Chain Me”. Collectively it could refer to her self-professed identity issues as a child or it could just be the telling of a bondage role-play episode. It’s a powerful song for sure, powerfully delivered, and one that is sure to go down well in concerts.

‘Wish’ is the longest track at 5:16 and is quite gorgeous. Just as she had “one more second to live” on ‘One Breath’ here Calvi has “one more wish…before I die”. The song changes direction and time signature on several occasions from driving rock into slower, generously synth-ed, orchestrated and vocalised sections and back again and then, when you least expect it, into a trademark guitar lick that is somewhat akin to that on “Love Won’t be Leaving” if shorter.

In the background are Calvi’s little whispers; and sudden gasps as if she’s just been groped from behind by Cherie, whoever she is (“Cherie…your eyes…”), and a soprano operatic voice that could belong to Montserrat Caballé. It’s a complex track, more like a musical opera (Calvi’s last job before this album was to score one). It rages like a Californian wildfire battled by helicopters dumping buckets of Radox and manages to raise the goose bumps throughout. It’s simply in a class of its own.

‘Away’ (Anna Calvi doesn’t go in for long titles) is again unusual in that it is a slow ballad to softly strummed guitar and she doesn’t do many of those.  Possibly a ‘death-bed’ song, (“There is no shadow of mine/there is a rage in the sky/is this the moment sublime/you know I ask no more of it all…”) she’s had to develop a slightly different singing technique to deliver it and it’s lovely.

The final track, ‘Eden’ picks up in the same vocal vein but with greater purpose, to an insistent snare drum beat. Again, it’s beautiful. The title and the lyrics suggest a “(Garden of) Eden” scenario of innocence between two parties and of associated falls and expulsions, emphasised by the finality of that semi-military drum beat which accompanies the beginning and end of the track. There is both religious and secular symbolism too, in the line “Through the window I see/ All your poplar trees”. The guitar riff is pleasantly reminiscent a litttle of Arcade Fire’s classic ‘Headlights look like Diamonds’ and Calvi’s multi-tracked harmonies are delicious.

So, three or four cracking tracks that really should each get serious airplay, great arrangements, powerful keys, lush guitar with a handful of wild solos: it’s standard Calvi fare; intelligently written and performed throughout and with the added benefit this time of the alluringly strong hooks that have been the missing link distancing her from greatness.

Anna Calvi creates emotion in a way few others do. Whatever your opinion of her style of music I defy you not to be moved by this album. She can sing the softest sweetest ballads, while generating as much power on her own with the Telecaster as any metal band. And undoubtedly, at 37, she’s the sexiest act on the circuit. Anywhere.

Anyone who thought the first album and ‘One Breath’ were evidence of wizardry will be blown away completely by this one. She’s reached the pinnacle of personal achievement here; the Manchester City of football, the Roger Federer of tennis or the Tirunesh Dibaba of track 5,000 and 10,000 metres. Add to that matchless production by Nick Launey.

Awarding a score of 10 is unusual (is anything perfect?) but were it not for a marginally sub-par ‘Alpha’ the mark would be off the scale and if there was ever a ‘shoo-in’ for next year’s Mercury I swear this is it.