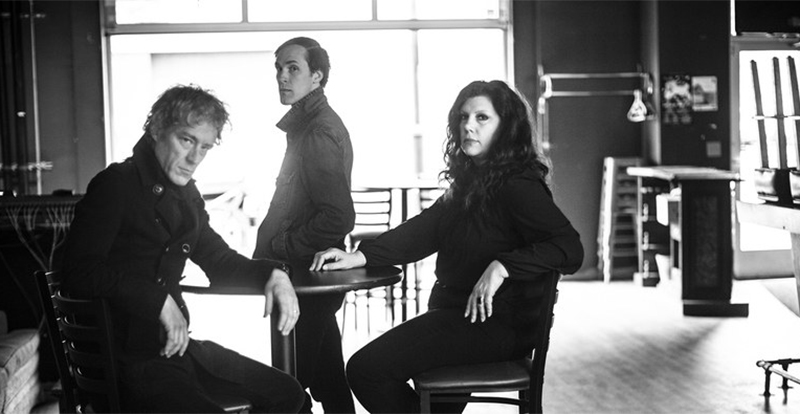 Over the last twenty-five years, Low have perfected a sparse, country-inflected, post-rock sound, distinguished by the glacial vocal harmonies of Alan Sparhawk and Mimi Parker.  They command an almost spiritual reverence from their audience, and their formidably intense live shows have somehow always eclipsed their recordings.  On 2015’s Ones and Sixes, however, producer B.J. Burton (best known for his work with James Blake and Sylvan Esso) captured something of their essence.  It’s no surprise that he’s back for Double Negative (out 14 September on SubPop), and in recent interviews, Sparhawk has been talking him up as the ‘hip-hop guy’, and a full collaborator and co-writer.  Just don’t go in expecting Ones and Sixes Part Deux.  This is a contentious and difficult album, laced with politics, R&B attitude and bad vibes.

Yet it also sort of isn’t.  Songs and noises do run into each other in bold and unexpected ways and it’s often not easy to identify what kind of musical instrument is making a particular sound.  The opener, ‘Quorum’, and its companion ‘Dancing and Blood’ sound like something nasty creeping along a gutter.  The album’s first intelligible lines are a reproach: ‘I’m tired of seeing things / You put away the book / What are you waiting for?’  It’s sullen and hostile.  But then ‘Dancing and Blood’ concludes with two and a half minutes of vocal exhalations looped and fading in and out of each other, cold and expressionless, until the keyboard strikes up the opening chords of ‘Fly’, and we’re taken somewhere better and more hopeful.  Parker’s vocals have never sounded more ethereal: ‘Well I don’t know / And I don’t mind / Leave my weary bones / And fly’.  When Steve Garrington’s bass finally kicks in he finds an exquisite counterpoint in a superbly Bowie-ish white-boy-funk groove.  I don’t know that they’ve done anything more uplifting and magisterial.

In ‘Tempest’ there are glimpses of a beautiful song behind a veil of sonic sludge.  Again it’s achingly sweet on one level, and utterly contrary on another, but it makes My Bloody Valentine look like a bunch of try-hards who only use so many layers of distortion because they can’t seem to hit on the right one.  Similarly ‘Always Up’ dares you to find fault with it.  It’s not so much a song as a dialogue between different song fragments, its footsteps finally tending toward to a piano and vocal composition invoking the kind of dystopian future imagined by Vangelis.  Anybody else would have done this the other way round, and started with the homage to Blade Runner and built a song from there, but I like the audacity of the idea that the song is the intro and gets pared down until you’re left with something essential.

On ‘Always Trying to Work It Out’, Sparhawk and Parker’s vocals slide around one another on the chorus, the pitch of Sparhawk’s voice electronically dropping and rising around Parker’s.  It’s like ‘Total Eclipse of the Heart’ for sad hipsters bumping into each other at the farmer’s market, but even here there’s something more troubling: ‘Everybody says the war is over / It isn’t something you forget so easily’.  Then ‘The Son, The Sun’ enters proper Brian Eno territory and hints that this incarnation of Low could go much further into abstraction.

But not while there’s the final suite of songs to drop.  ‘Dancing and Fire’ is classic Low, all obvious production trickery dispensed with in favour of a simple arrangement of guitar and voice.  The album needs it because the next two tracks are a scary trip.  ‘Poor Sucker’ may or may not be about murder, offering the confusing rush of a dime store drama, all lies and double crosses, while ‘Rome (Always in the Dark)’ opens big and gets bigger.  It’s hard to make out what’s going on – ashes and violence are all around, voices melting into static-laden chords that crash down like chunks of falling masonry.  ‘Let’s turn this thing up / Before they take us out’, commands Sparhawk, summoning up the classical excess of early Sisters of Mercy.  Through the fug, these songs stink of crime, empire and violence.  Low haven’t sounded this unnerving since their Iraq War era album ‘Drums and Guns’ and the chilling refrain, ‘You might need a murderer / To do your dirty work’.

They’ve thought long and hard about what it is to make an album in 2018, what it is to deal with the hopelessness spat out by our phones every day.  You can hear that most clearly in the redemptive closing track, ’Disarray’.  Something alien and impersonal pulses under the harmonies, but otherwise the sweetness they’ve been doing battle with is instantly restored.  We can do better, it says.  You can do better.  Live better and do better things.  Don’t listen to that man who appeals to your worst instincts.  And who, I wonder, could they mean?  The pity is that there’s at least a hundred candidates.  Whichever one you’re thinking of, he isn’t even special.

Double Negative by Low is simultaneously like nothing they’ve ever done before, and exactly like everything they’ve ever done before.  It’s the work of a band that has pushed their music beyond its limits and created something I’ve hardly begun to take in even after listening to it incessantly for the last three weeks.  It isn’t for everyone, but if you’re looking for a challenge and aren’t afraid of the dark, you’re not likely to find a more satisfying album this year.

Double Negative will be released on 14th September through SubPop.