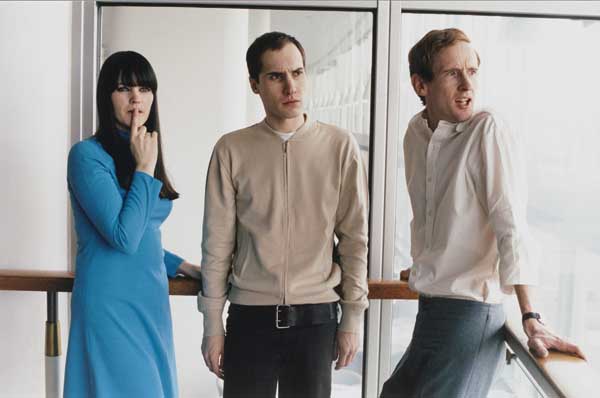 Trish Keenan, lead singer of the Birmingham based group, Broadcast, tragically died of pneumonia in January 2011. Today, would have been her 50th birthday.

Broadcast were a group who appeared at a time when certain record companies and areas of the music press were still preoccupied with Britpop, trying to find the next big thing. Instead of chasing trends, Broadcast indulged their own idiosyncrasies creating a unique sound. The 60s movie sound effects, analog keyboards and sparse guitars often made it feel like they were trying to soundtrack movies only made in their heads. Their otherworldly songs were enigmatic and full of vivid imagery that revealed more hidden depths the more you delved into their world. Their music could be deeply moving and unsettling, sometimes at the same time. They were remarkably consistent too. No matter the twists and turns, they took us on, it always felt very much like Broadcast. Their influences set them apart, with 60s cult artists such as White Noise, United States Of America, and later on, the brilliant Young Marble Giants being common reference points.

It’s perhaps understandable that Broadcast’s refusal to compromise made them one of the classic outsider bands. Whist they did gain some acclaim and a modest cult following, they weren’t fully appreciated in their day. In 2005 they released their masterpiece, Tender Buttons. If you revisit the end of year lists, their absence is noticeable. A better testament to their legacy is how much you can hear them on some of today’s most captivating artists. Rose Elinor Dougall recently claimed Broadcast were her favourite band of all time. She takes influence from their sound on her two excellent solo albums. Fellow ex-Pipette member Gwenno also features an obvious debt to their unique avant-garde pop sound. Elsewhere, Melody’s Echo Chamber, Jane Weaver, Julia Holter and Susanne Sundfør have all touched upon similar elements that made Broadcast so bewitching.

Trish Keenan’s vocal style was one of the group’s most alluring qualities. She oscillated between cool detachment and sounding incredibly human and vulnerable. Her voice sounded perfect over different styles. Whether it was Krautrock inspired electronic rhythms or where she radiated an innocence found in their 60s folk pop inspired melodies. With James Cargill she had a perfect foil, a visionary, a musician and a songwriter that helped create the perfect partnership.

Today, I will pick 11 songs by this extraordinary group as a tribute to Trish Keenan who is sorley missed

Living Room (1996) – People often have their own stories about being struck by something they heard on the John Peel Show. Being introduced to the eerie sounds of Broadcast through their second single, ‘Living Room’ in May 1996 was one of those special moments for me. Broadcast arrived sounding fully formed with a clear identity. It was easy to be seduced by the sharp picked guitars, the dizzying waltz of the rhythm and Keenan’s hushed vocal. The wordless chorus with its beguiling tempo change and sci-fi keyboards was instantly spellbinding. As Keenan enticingly repeated, “we could go to the cinema, where everything would be so tall” it was like hearing my new favourite band and sometimes, nothing beats that feeling.

The Book Lovers (1996) – For the band’s third single, they made one of the finest singles of the decade. Using an insistent harpsichord-led riff and a baroque string arrangement they perfected t
heir own brand of retro futurism. As the drums and bells crash down in the chorus, it gives the band one of their most cinematic and dramatic moments. The atmospherics in the instrumental passage are the sound of a band with a penchant for tiny details (the crackling of vinyl and strings that conjure up vintage movies from the 50s). As Keenan sings, “read the sign above the door it’s not for everyone”, there is a sense of mystery in her lyrics that was detrimental to their appeal. It was there from day one and until the premature end.

A Message From Home (1996) – The Book Lovers EP came out in November 96 on Stereolab‘s Super Duophonic 45s series. It was released within weeks of Stereolab’s Fluorescences EP (a band who Broadcast were often compared to). They’re both contenders for the greatest EP ever made. ‘A Message From Home’ was so strong, it could have been the lead with the skipping drums and catchy guitar licks. Keenan asks, “why do I open my mouth where silence should have been” before another brilliant twisting instrumental chorus kicks in. These first three EP’s were collected on, Work & Non Work the following year. A compilation that flows just as well as any of their albums and acts as a perfect introduction to the band.

Echo’s Answer (1999) – ‘Echo’s Answer’ appeared as a single in late 99, three years after their previous release. It was the first release on Warp and teaser from their exceptional debut, The Noise Made By People. It features the same filmic tension that appeared on their early singles, but this time the drums, bass and guitar are all stripped away. It leaves a stark keyboard and intricate vocal from Kennan who eventually gets absorbed into the feedback on this hauntingly beautiful song. The stripped down structure is something they would revisit after losing band members on Tender Buttons.

Come On Let’s Go (2000) – ‘Come On Let’s Go’ was released as the third single from The Noise Made By People and is the closest Broadcast came to a hit (number 82 with a bullet!). It’s easy to hear why this became their signature song. The electronic textures evident on their earlier work are interwoven neatly into the main melody which is one of their catchiest bits of songwriting. The motorick bass-line is deeply entrancing as Keenan’s warmly familiar voice invites us to join her on this declaration of being independant, “what’s the point in wasting time on people that you’ll never know, come on let’s go”. It’s another masterful single.

Where Youth & Laughter Go (2000) – After a few years of inactivity, Broadcast had a prolific year in 2000. As well as releasing, The Noise Made By People, they put out the two Extended Play EP’s. They both contain a number of treasures. ‘Where Youth & Laughter Go’ is a stunning  highlight from the second EP. The psychedelic layers give way to a hypnotic chorus with Keenan’s rich harmonies. All of their B-sides and EP tracks came out on their second compilation, The Future Crayon in 2006. It’s an excellent document of the ideas and creativity the band had flowing out of them in the first half of the decade.

Before We Begin (2003) – Another three years went by for their third album, Haha Sound. The end results were more than worth the wait. Continuing the space age pop they’d created on their previous work, their improvisational side was slowly increasing. The rattling drum rolls courtesy of Stephen Perkins on ‘Before We Begin’ shows their interest in jazz. It’s a nice compliment to their take on dream pop which ends up as one of their prettiest and most commercial songs. There’s an irresistible purity in Keenan’s voice as she sings, “oh it’s in tomorrow, fortune or sorrow, wait, you may win”. The wistful melody exhibits their talent for tapping into an imagined nostalgia that was often made them such a reassuring group.

Ominous Cloud (2003) – Another Haha Sound highlight is the gorgeous jazz tinged, ‘Ominous Cloud’. Over one of their most dreamy melodies Keenan paints a welcoming picture of escapism, “oh let me sail away on the beach and on the earth, the boats on the sea are blissfully free. They will come to no harm, ’cause the waves are so calm”. The swirling keyboards are delightfully trippy as Keenan sings of trying to remain positive, “I’ve got to find a place be myself and learn to face the ominous cloud”. The loose approach to their structures is evident as the percussion clatters around her. It’s one of their most sonically rewarding songs

Tears In The Typing Pool (2005) – For Tender Buttons, the band slimmed down to a duo of original members, James Cargill and Trish Keenan. After a flawless run of albums and EP’s, they achieved perfection on this stunning album. Because of the decreased line-up, the album is minimal as they rely on programmed drum machines and lo-fi production techniques. ‘Tears In The Typing Pool’ is an exquisite piece of pastoral melancholia that at two minutes, is all too brief. Cargill provides an effective backing with a strummed guitar and melotron. Keenan’s angelic voice is the star of this intimate folky ballad as she sings, “before the end of me and you, the patchwork explains, the land is unchanged” with the sadness of the breakup caught in her voice.

Black Cat (2005) – Despite the change in band dynamics that meant a reliance on minimal arrangements, Tender Buttons still contains some of Broadcast’s most deceptively catchy and urgent songs. ‘Michael A Grammar’, ‘Goodbye Girls’ and ‘America’s Boy’ blend distorted retro video-game synths with simple melodies that quickly take hold. ‘Black Cat’ uses the same technique with layers of shoegaze styled guitars eventually taking over. As Keenan nonchalantly repeats, “the black cat, curiouser and curiouser” you begin to long for a world where songs this oddly addictive could be hit singles. Portishead would venture into similar territories three years later (albeit without these catchier moments) on the mesmerising, Third.

The Be Colony/Dashing Home/What On Earth Took You? (2009) – Following another gap between releases, Broadcast put out two releases in October 09. Mother Is The Milky Way was a brief 20 minutes of abstract sketches. This song comes from, Investigate Witch Cults Of The Radio Age which was a collaboration with The Focus Group. It’s one of the few songs featuring Keenan’s voice as her layered harmonies and repetitious nursery rhyme melody form the middle section of this bizarre conclusion to the album. As the years went on, Broadcast progressed with their more experimental edge increasing. Their songs became darker and more fragmented. The dense sound collages on Witch Cults were disorienting as they lived out their folk horror fantasies (The Wicker Man being a key influence). Investigate Witch Cults Of The Radio Age was the last release to feature Keenan’s vocals (2013’s Berberian Sound Studio was all instrumental). It’s heartbreaking not to be able to hear where they would have gone next. Broadcast were a special band with one of the most rewarding back catalogues in music. 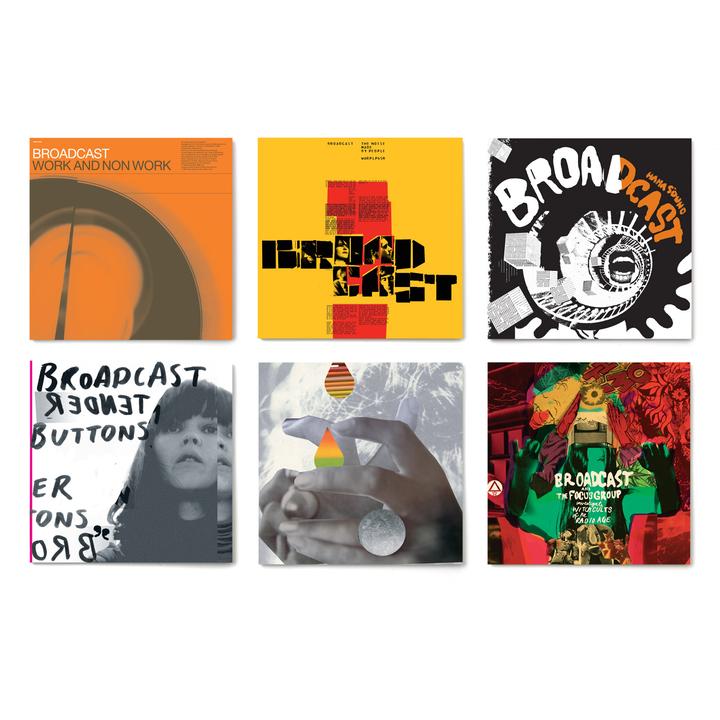