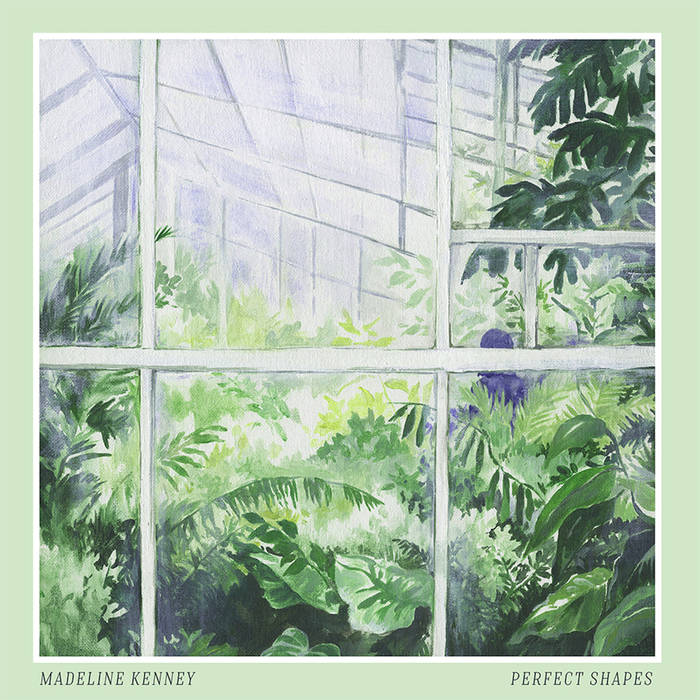 The most repeated story about Madeline Kenney is that she has a degree in Interpersonal Neurobiology, spent 9 years as a professional baker and sometimes makes ends meet as a Nanny. While her move to Oakland a few years ago certainly set off a chain of events to precipitate her rise in popularity as a musician, the fact is Kenney has always made music. From the first piano lessons, aged five, to learning the technical aspects of recording and sound engineering, aged 26, at Women’s Audio Mission (the only women-built and run studio in the world) Kenney’s work and self-development ethic applies to her music-making as much as any other occupation she has.

A huge step change, Kenney’s brilliant second album, Perfect Shapes, arrives barely a year after the release of her airy, guitar- centric debut Night Night At The First Landing, produced Chaz Bear (Toro Y Moi). Perfect Shapes was recorded in January in Durham, North Carolina, the hometown of its producer, Jenn Wasner (Wye Oak, Flock Of Dimes). Alongside Kenney’s touring percussionist, Camille Lewis, and a couple of other musicians, Wasner and Kenney share vocals and take turns on a variety of instruments on the album, creating an exciting synergy that sends their song arrangements off in unexpected directions as Perfect Shapes unfolds.

This unfolding process begins with ‘Overhead’, a curiously bleak, yet optimistic jumping-off point into the dream world Kenney constructs on the album. “What’s the light I’m living in?” she asks, as the rattling bit-crunched percussion and weighty bass bear down on us. As the song ebbs away, its  psychic pressure segues into ‘Bad Idea’, drowning in the the menace of its rising synth swells. “Someone gave up / I don’t know who it was / We’re getting bad, bad ideas” sings Kenney, in a moment of self-awareness. The song, about the subconsciously predicted collapse of a relationship, reflects her experience of what happens sometimes when you pursue the things that matter to you, and choices that take you further away from the people ‘back home’ wherever, or whatever, that represents.

Whereas Night Night was focused on other people, the more introspective and escapist path on Perfect Shapes gives more space to revel in self-searching questions. The progressive pop sound of ‘Cut Me Off’ is unlike anything Kenney has written before, and yet is comparably the most immediately accessible track on the album. The accompanying video to single ‘Cut Me Off’ depicts the unravelling identity of a woman in power, pushing away boundaries. As the song bounces joyously along, she imagines no consequences for doing exactly what she wants: “I got a good thing goin’ now / I don’t know where I wanna be.” In contrast, with its busy saxophone hustle and bittersweet echoes of Arthur Russell, ‘No Weekend’ explores what it’s like to lose all your time and, consequently yourself, to work. ‘Know’ is different again, its guitar layers and intertwined vocal harmonies floating like leaves on the autumnal breeze, as Kenney asks “Who has courage? I don’t really know”

Fear of growing old and the vanity of self-consciousness are playfully deconstructed on ‘The Flavor Of The Fruit Tree’. While it’s not one of our favourite tracks here, Kenney’s wry humour shines through, particularly in the reversed vocal at the end, singing “It’s my party and I’ll cry if I want to”. The more gradiose, ‘I Went Home’ and ‘Perfect Shapes’ ooze with the atmospheric devices of Wye Oak’s last album, The Louder I Call The Faster It Runs; the euphoria of feedback held tensely against the vocals, and huge and expansive ceilings of synth reverb that dissolve away like smoke. But it’s ‘Your Art’ and ‘Always Around Me’ which are the most touching lyrically and emotionally, arrayed their hazy nostalgia. Where other songs pivot around Kenney’s interesting offbeat diversions and surprises, here she blends and embeds them into the musical backdrop.

Like the fibonacci window on the album cover Perfect Shapes is enigmatic and magical. Its abstract beauty speaks to the hidden potential of following your desires, and shows that the longer route can take you closer to where you need to be.

Perfect Shapes is released on 5th October, 2018 via Carpark Records